About Lapis Lazuli - History and Introduction
Lapis lazuli, often referred to as just 'lapis', has been used as a gemstone for thousands of years. It has been mined from Afghanistan since the early 7th millennium BC, and it was discovered in ancient burial sites throughout the Caucasus, the Mehrgarh and even as far as the Republic of Mauritania. The funeral mask for the ancient Egyptian pharaoh 'King Tut' was even discovered to have been decorated with lapis lazuli. 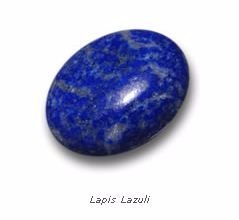 This historical stone has a name closely associated with its intense color. Its name was derived from the Latin word 'lapis' meaning 'stone', and from the Arabic and Persian word 'lazaward'. 'Lazaward" was the Persian name for lapis stone, as well as the name of its mining location. In other parts of the world, words for 'blue' were named after the color of lapis, including the English word 'azure'; Italian 'azzurro'; Polish 'azur'; Spanish 'azur' and Romanian 'azuriu'. Today, lapis lazuli is still considered to be one of the most important opaque blue gemstones available.

Lapis usually forms in crystalline marble through the geological process of contact metamorphism and due to its composition, it is technically defined as a rock rather than a mineral. It is primarily composed of lazurite, while the remaining composition is made up of sodalite, calcite, pyrite and other various minor constituents. The varying composition is what influences its exact coloring.

Lapis Lazuli
Identifying Lapis Lazuli Back to Top
Lapis lazuli by definition is a rock primarily composed of lazurite (25% to 40%), calcite and pyrite. Lazurite is a feldspathoid silicate and belongs to the sodalite group of minerals. Minor constituents can include augite, diopside, enstatite, mica, hauynite, hornblende and nosean. Lapis lazuli can be easily confused with other blue opaque gems such as azurite and sodalite, but azurite has a lower hardness and is typically darker in color than lapis lazuli; while sodalite in most cases, has a lighter color and its granularity is not as fine as that of lapis lazuli.
Lapis Lazuli Origin and Gemstone Sources Back to Top
Discovered 6000 years ago, the oldest lapis lazuli deposits are located in the difficult terrain of the West Hindu-Kush Mountains in Afghanistan. Today, Afghanistan is known to produce the finest quality lapis lazuli and is also the most significant source. Other commercial deposits have been also found in Angola, Argentina, Canada, Chile (North of Santiago), India, Italy, Myanmar (Burma), Pakistan, Russia and the United States (California and Colorado).

Lapis Lazuli Color
Although the colour of lapis lazuli is defined by its name, 'the blue stone', its colors can actually range from slightly greenish blue to violetish, medium to dark and from low to highly saturated. The blue is owed to sulfur coloring agents. The finest stones exhibit an evenly distributed color and have no visible deposits of calcite, although a moderate amount of gold pyrite flecks is considered acceptable. Too much pyrite can result in a dull, greenish tint, while calcite can predominate the mix, giving the stone an overall less appealing lighter blue shade.

An evenly distributed, highly saturated, slightly violet-blue color with little to no pyrite or calcite is the most prized; stones of this quality are sometimes referred to as 'Afghan' or 'Persian'. Lapis colors are often described using an adjective that refers to a specific locality, but that does mean the gem is actually from that area. For example, 'Chilean lapis' may not actually be from Chile, but is a term often used to refer to lapis with a green tint, which is heavily included with white calcite.

Lapis Lazuli Clarity and Luster
Lapis lazuli occurs opaque in clarity. Lapis is often included with varying amounts of pyrite and its host rock matrix; calcite. When polished, it can have a vitreous to greasy and sometimes dull luster.

Lapis Lazuli Cut and Shape
Lapis lazuli comes in various shapes and cuts. It is mostly cut en cabochon for rings, beads, bracelets and necklaces, as well as carved sculptures, vases and various ornamental objects. Round, spherical and oval shapes are most popular, followed by fancier hearts and trillions.

Lapis Lazuli Treatment
Lapis lazuli is typically not treated or enhanced in any way. However, some lighter materials may be dyed to result in deeper blues; dyed lapis may also be coated or with wax or plastic to improve stability. In some cases, lapis may be impregnated with wax or resin to improve color and luster. There is synthetic lapis lazuli available known as 'Gilson lapis' and there are many simulated stones too, typically dyed howlite or jasper. Dyed jasper is often referred to as 'Swiss lapis'. 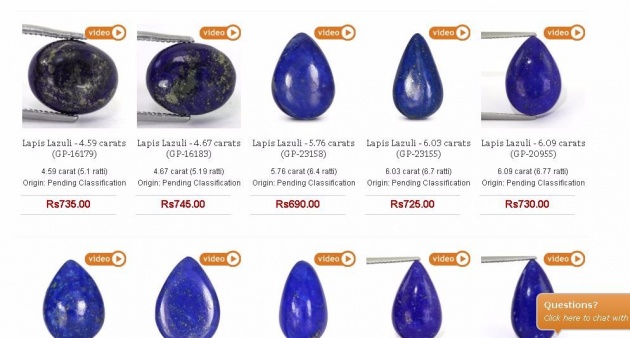