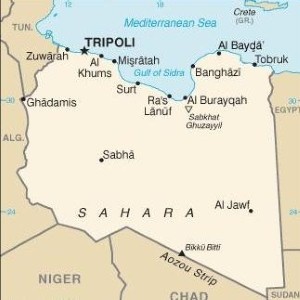 Both Gaddafi regime loyalists and its various militia opponents have been accused of grave violations of international humanitarian law: “Acts of murder, enforced disappearance and torture were perpetrated within the context of a widespread or systematic attack against a civilian population. The Commission found additional violations including unlawful killing, individual acts of torture and ill-treatment, attacks on civilians, and rape. The Commission further concluded that the thuwar (anti-Gaddafi forces) committed serious violations, including war crimes and breaches of international human rights law, the latter continuing at the time of the present report.” These conclusions were submitted by "Libya Inquiry" Commission chaired by my old colleague Professor Cherif Bassiouni. See more at our video for blogs - diplomaticallyincorrect.org/films/movie/libya-inquiry-commission/26328 Violations included unlawful killing, arbitrary arrest, torture, enforced disappearance, indiscriminate attacks, and pillage. Anti-Gaddafi fighters particularly targeted members of the Tawergha community and other groups for attack.The panel was established by an emergency session of the UN Human Rights Council on 25 February last year and mandated to investigate all alleged violations of international human rights law in Libya, establish the facts and circumstances of such violations and of the crimes perpetrated, and regardless of whether it was the regime or opposition parties.. The commission also concluded that the North Atlantic Treaty Organization (NATO) conducted a highly precise campaign with a demonstrable determination to avoid civilian casualties. On limited occasions, it confirmed civilian casualties and found targets that showed no evidence of military utility. “The Commission was unable to draw conclusions in such instances on the basis of the information provided by NATO and recommends further investigations,” it says in the report. The Commission noted that Libya’s interim Government faces many challenges in overcoming a legacy of more than 40 years of serious human rights violations and deterioration of the legislative framework, judicial and national institutions. It took note of the transitional Government’s expressed commitment to human rights, saying authorities have taken positive steps to establish mechanisms for accountability. The panel said the Libyan Government is gradually restoring the judiciary by reopening courts and recalling judges, and there has been some progress in the transfer of detainees to central Government control. Nevertheless, it voiced concern over the failure to hold accountable members of the thuwar who committed serious human rights violations.“Libyan authorities can break with the Gaddafi legacy by enforcing the law equally, investigating all abuses – irrespective of the perpetrator – and ensuring that amnesty processes comport with Libya’s obligations under international law,” the commission says. “To give effect to its commitment to improve the human rights situation in Libya, the interim Government will need considerable support from the United Nations and the international community.” The Commission will present its report to the Human Rights Council on 9 March. For many further current news event articles related to Libya, see our popular video blogs at "WarCrimesJustice" Channel - aticallyincorrect.org/c/war-crimes-justice By Ambassador Muhamed Sacirbey – Follow @MuhamedSacirbey Facebook = Become a Fan at “Diplomatically Incorrect” Twitter – Follow us at DiplomaticallyX

After the withdrawal of Libyan leader Muammar Gaddafis forces from Benghazi, a female rebel fighter …

Omar Mukhtar, Emir of the Mujahideen of Libya, headed jihad against Italian invaders in the 1920-193…

The Sahara, which is the largest desert of the world, covers more than 25% of the total area of Afri…