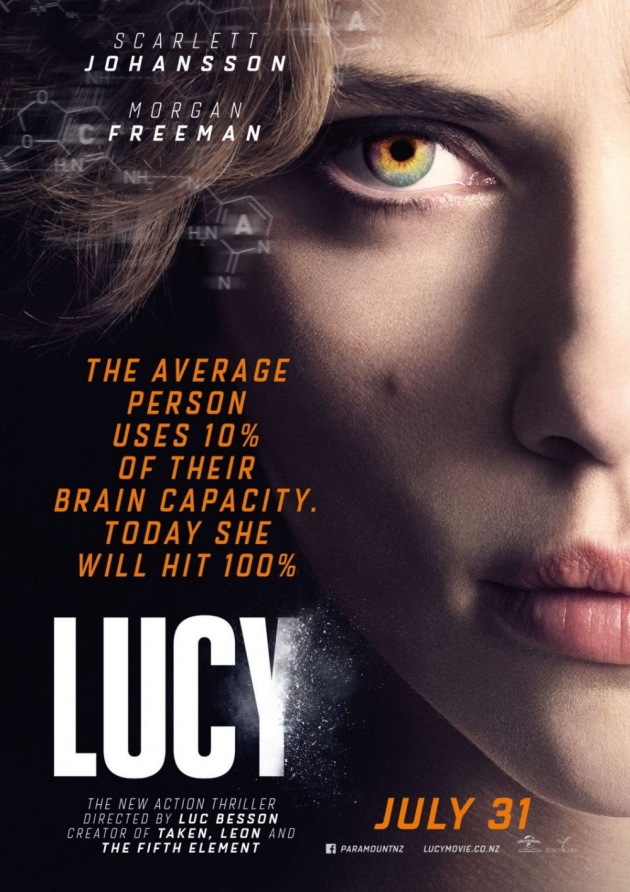 What would you do if you can access 100 percent capacity of your brain? What do you think you CAN do when you do? Perhaps the movie Lucy can show us some of the possibilities.

And that's what happened to Lucy.

Richard tries to convince Lucy to make the delivery for him.

Image Credit: by @artbytes via bitlanders

Lucy (Scarlett Johansson) was just an ordinary American girl studying in Taipei, Taiwan. Nothing was out of the ordinary until her boyfriend, Richard tricked him into delivering a suitcase to his employer Mr. Jang (Choi Min-Sik). What both of them don't know is, Mr. Jang is a ruthless Korean druglord. Richard was shot outside the building and Lucy was brought up to Mr. Jang's room, by force. From there, Lucy learned that the suitcase contains 4 packs of new synthetic drugs.

One pack of the drugs were forcibly inserted into Lucy and one each to three other men. Each of them has different destinations in Europe.

Lucy with the other drug mules.

Image Credit: by @artbytes via bitlanders

However, one of Lucy's captors kicked her on the abdomen. The packet containing the drugs was punctured and the drugs leaked into Lucy's bloodstream.

The drug started to give Lucy access to more than 10% of her brain capacity, thus giving her abilities she didn't have before. She became ruthless and almost emotionless as well. She escaped her captors and killed them in the process. She went to a hospital and forced a surgical team to remove the remaining drugs from her abdomen. While the doctor performs the surgery she called her mother.

While a surgeon removes the pack of drugs from her abdomen, Lucy calls her mom.

I can feel the gravity.

I can feel the rotation of the Earth,
the heat leaving my body,
the blood in my veins.

I can feel my brain,
the deepest parts of my memory...

The pain in my mouth
when I had braces.

I can remember the feeling of your hand
on my forehead when I ran a fever.

I remember stroking
the cat, it was so soft."

Lucy: "A Siamese with blue
eyes and a broken tail."

Mom: "Sweetie, you can't possibly remember that.
You were barely a year old.

Lucy: "I remember the taste of
your milk in my mouth."

She did this while the surgeon is operating on her... without anesthesia.

Because of the drugs, Lucy developed extraordinary physical and mental abilities. She is faster, stronger and she was able to remember things that happened even when she was barely a year old. Also, she can no longer feel pain and she became ruthless as well.

The doctor explained to Lucy what the drug CPH4 is. He was amazed that Lucy was still alive with the amount of the drug that got into her body.

Lucy returned to Jang's hotel. Killed all his bodyguards. Four of them were shot from behind a closed door. She pinned Jang's hands to the chair with a couple of knives. With her new telepathic abilities, Lucy read Jang's memory to locate where the other three drug mules are headed.

Lucy stabs Mr. Jang's hands with a couple of knives.

She went back into her apartment and searched the Internet about what's happening to her. She contacted Professor Samuel Norman (Morgan Freeman), a leading researcher on brain capacity. She showed him what she can do with 28% of her brain capacity.

At 30% capacity, Lucy can read minds even through vast distance, see through solid objects, control electronic devices, change her hair color in an instant. She can even control the behavior of a dog.

On her way to Paris, she called Capt. Pierre Del Rio (Amr Waked)  and alerted him about the arrival of the three drug mules in different European countries including France. The drug mules were caught. But the Korean drug syndicate is not too happy about it.

As her plane was about to land, Lucy's body became unstable and started to disintegrate. Her body stabilized only after consuming the more of the CPH4 she is carrying.

Lucy's body started to disintegrate until she consumed more drugs.

Lucy woke up at a hospital. Her powers continue to grow stronger. With her mind, she put a number of police officers and hospital staff unconscious and removed the bullets from Del Rio's gun.

She sees cellular phone signals like they were lights and she can read them.

Reading the "cellular signals" from the windscreen

At 60% capacity, she created an invisible wall the stop the Korean from leaving with the drugs. She disarmed the Korean goons and made them float like balloons just by the power of her mind.

At the university, Lucy met Professor Norman and some of his colleagues. She agrees to pass on all the knowledge she gained to them. But she needed the rest of the drugs to "unlock" the rest of the cells of her body.

Why the Jang and his goons ensues a gun battle with the police, Lucy started to create a new generation of a supercomputer from every computer and electronic devices in the room.

With an anti-tank rocket, the Korean destroyed the door and Jang entered to shoot Lucy from behind. But as he pulled the trigger, Lucy reached 100% of her brain capacity and she vanished. Del Rio shot and killed Jang. The computer Lucy created handed what appears to be a very long flash drive to Professor Norman. Presumably, it contains all the knowledge Lucy gained.

The supercomputer hands a large flash drive to Professor Norman.

According to a study, two-thirds of the population believe that humans only use 10% of their brain capacity. That when we start to use more than 20% of our brain capacity we start doing extraordinary things.

However, French writer and director Luc Besson capitalized on this theory and made a fantastic movie. Assuming there is some truth on the 10% Brain Capacity Theory, a person could gain super-human powers once we started using more than 10% of our brain capacity. Such is what happened to Lucy.

Upon breaking the 20% capacity, she just kept on gaining new abilities and knowledge as she continues to gain more access to her brain capacity. When she reached a hundred percent, her physical form vanished. Her last message to the puzzled Captn. Del Rio...

Recent scientific studies, however, prove that the 90% our brain is not inactive as the theory state. In fact, according to healthline.com:

"...some parts of your brain are working harder than others at any given time. But 90 percent of your brain isn’t useless filler. Magnetic Resonance Imaging (MRI) shows that most of the human brain is active most of the time. In the course of a day, you use just about every part of your brain."

Therefore, the theory that we use only 10% of our brain capacity is a myth. However, as the statement above says:

It says, MOST, and NOT all! This means there is still room for improvement.

Here's a video from TedEd

Let me leave you again with a couple of Querlo Chats

Do you support Women Empowerment?