Introduction:  Afghan artist Meena Saifi مینه سیفی  is a rising star in the world of international art.  Born in Kabul, she and her family were forced by the Afghan civil war to flee to Pakistan in the 1990s. They eventually found safehaven in Rawalpindi, Islamabad. 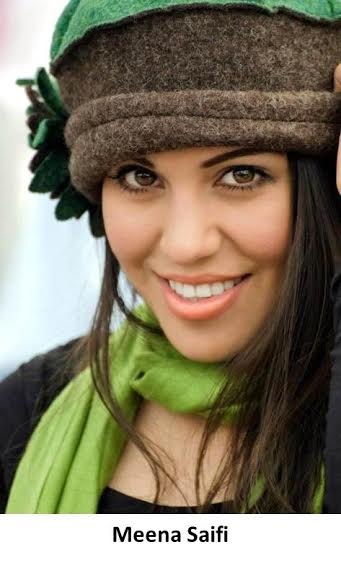 Her father Asadullah Saifi, an artist himself, built a successful school there to educate his own children and those of other Afghan refugees. From an early age Meena helped her father build the school’s curriculum, while continuing to draw and paint anything she could.

Still in a refugee status, the Saifi family was forced to relocate to Peshawar in 2004. Meena’s talent was recognized there by the revered Afghan artist Ustad (Art Master) Qais Nawabi.  Under his tutelage she quickly became his premier art student.  At the age of sixteen Meena’s first oil painting, “Dream,” was sold at a record price to an art collector in Germany.  The international art community began to take notice.

As her work evolved, Ustad Nawabi began referring to her respectfully as “Ustad Meena.”  (Art Master Meena).  She held her first official art show in Peshawar in late 2007.  At this show another of her paintings, “Baba Panjshiri” (Panjshir Grandfather) commanded great attention and was sold to an international art investor.  Shortly afterward Meena was offered her first media interview, with Voice of America.

After that first show in Pakistan, Meena’s reputation as an artist continued to climb. She held her first international art exhibition in Phoenix, Arizona in 2009, sponsored by the Pangean Orchestra.  Her show received excellent reviews and another of her paintings, “Dhol” (Drum), was acquired by an influential art collector. Her reputation grew. 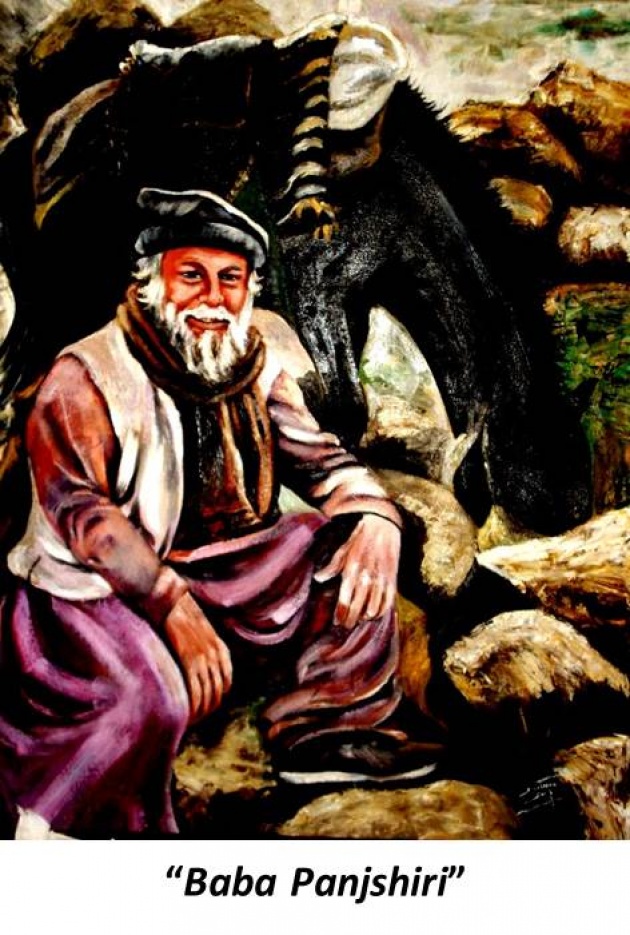 Since the 2009 Phoenix show, Meena’s work has been featured in art exhibitions in New York, Los Angeles, Germany, France, Afghanistan and Pakistan.

In May 2013 Meena was sponsored by the Fluxus Foundation - a global collective of artists, musicians and designers whose members have included John Cage, John Lennon, Yoko Ono, and Nam June Paik - to participate in the Whitney Museum of American Art’s Annual Art Party in New York City.

The Whitney Art Party is one of New York City’s largest annual gatherings of artists and Hollywood A-listers in the world of fine arts. This year’s event was sponsored by Max Mara and was hosted by the Whitney Contemporaries.

Meena continues to work with and support many other art projects around the world, including the Pool Art Fair, Art Warning the World, The Kabul Art Project, and others.

Film Annex:  Meena, it’s great to speak with you.  You’re a rising star in the international art world, and your work is gaining more and more public attention.  How did you begin as an artist?

Meena Saifi:  It’s wonderful to speak with you too, Dagarwaal (Captain/Colonel) Zellem.  دگروال زالم      You’re very kind to say that.  And thank you for your support of Afghan artists, and for all that Film Annex is doing for Afghanistan and the creative arts. Zenda bosheyn!  زنده باشین 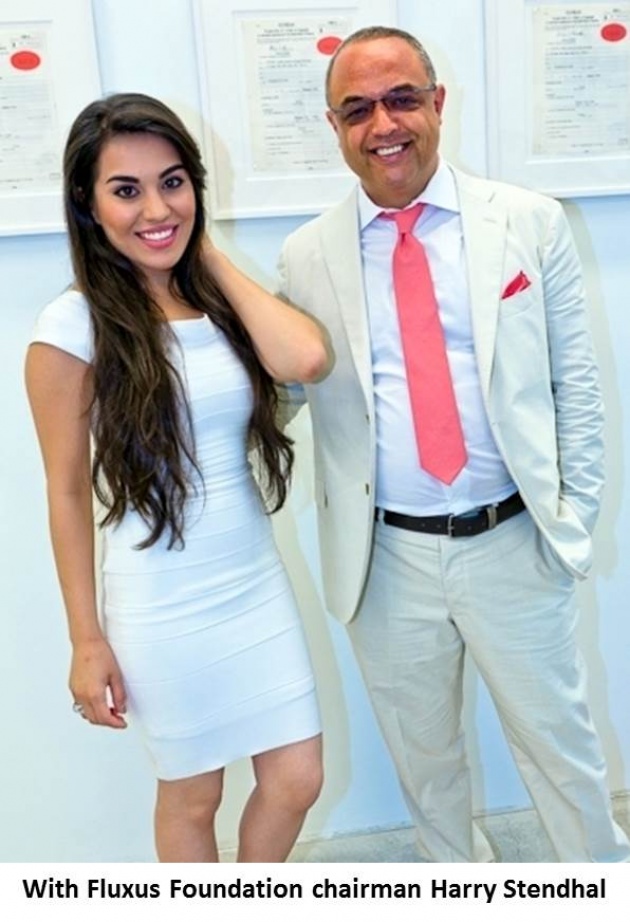 How did I begin as an artist?  It is hard for me to say.  I feel as though I have always been one.  Art comes from the heart, and it is a part of me.

The Afghan civil war in the 1990s was a dangerous and complicated time for all Afghans.  Even artists and other people who wanted only peace were targets in the fighting. So my family and I fled from Kabul as refugees and we escaped to Pakistan.

After we eventually found safe haven in Rawalpindi, my father built and ran a school there.  He named it Sufi Ashqari, صوفي عشقري  after a great Afghan poet.  My father was a graphic artist.  Even when I was a very little girl in Rawalpindi, I helped him with his art projects.

FA:  What inspires you?

MS:  What inspires me?  Everything.  Love, peace, humanity.  When birds are flying.  A drop of rain.  Smiling faces.  The eyes of people, which can never lie. The pain and tears of women. 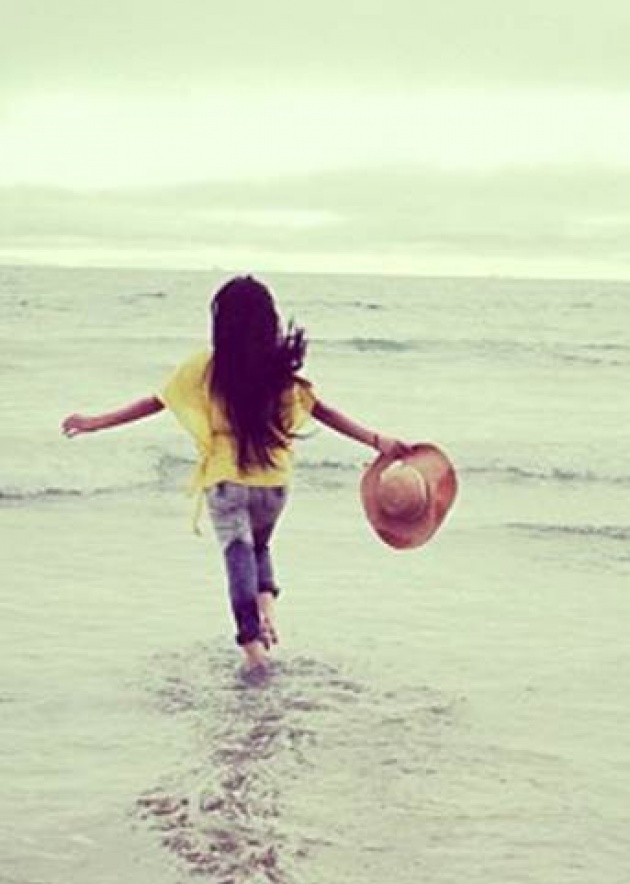 The poetry of Rumi, Hafez Shirazi, and Omar Khayyam inspires me.  Many other great poets like Sufi Ashqari. I am especially fond of Ghazal, a great and ancient poetry style that expresses the pain of loss or separation, and the beauty of love in spite of that pain.

Music inspires me, of course. All types, both modern and very ancient.  I enjoy Qawwali, which is a Sufi musical tradition that goes back more than 700 years.

FA:  What types of subjects and themes do you enjoy painting?  Do you prefer working in oil, acrylic, pastel or watercolor?  Do you have a favorite medium?

I get lost when I work on these themes.  I enter the universe of my imagination.  It is very hard to describe that feeling.  I have no words to describe that other world. It becomes just me and that world for a while.

I prefer watercolor because it comes very naturally to me.  I enjoy it a lot when I drop colors on paper, and they surprise me and create a beautiful new color. 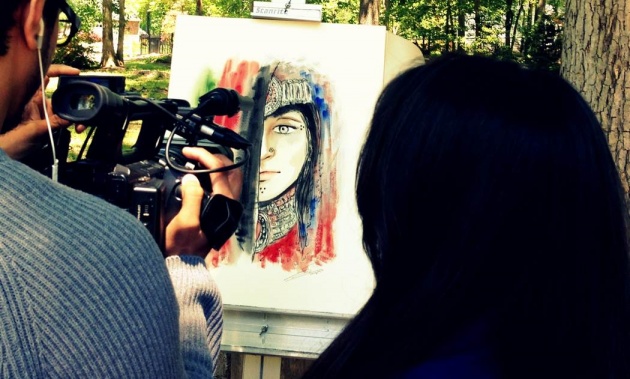 FA:  Western art is generally classified by type or period, such as Impressionism, Dadaism, Realism, Cubism, and others.  Does Afghan art have these types of categories?  What is your favorite type of art?  Who is your favorite artist?

MS:  I can only speak of what I know about Afghan art history.  I have read a lot of old books, especially old books of poetry.  I like books that are designed with Minatory art, a very ancient style of kaleidoscopic design.  In my opinion not enough academic research has been done on Afghan art history. A hundred books could be written on that topic. 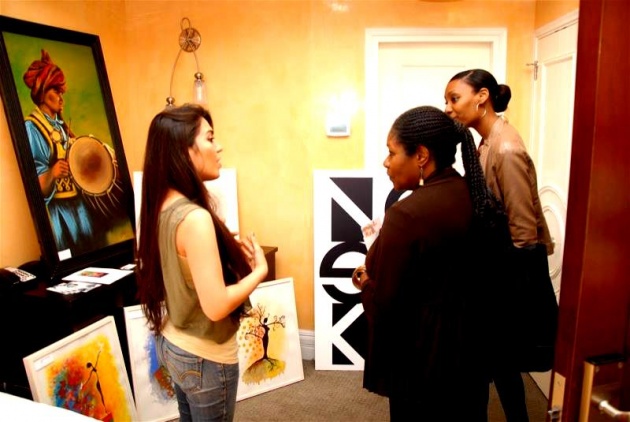 My understanding is that oil painting did not exist in Afghanistan until two Afghan artists named Ghulam Maimangee and Abdullaraqgar Bhrezhna graduated from a German art school in 1919, and returned home. The King of Afghanistan at that time was King Amanullah, and he was very interested in art and modernization.  King Amanullah even sent young Afghan teenagers to Europe specifically to learn the European art styles.

For centuries in Afghanistan before King Amanullah’s time, the main type of “painting” was calligraphy and 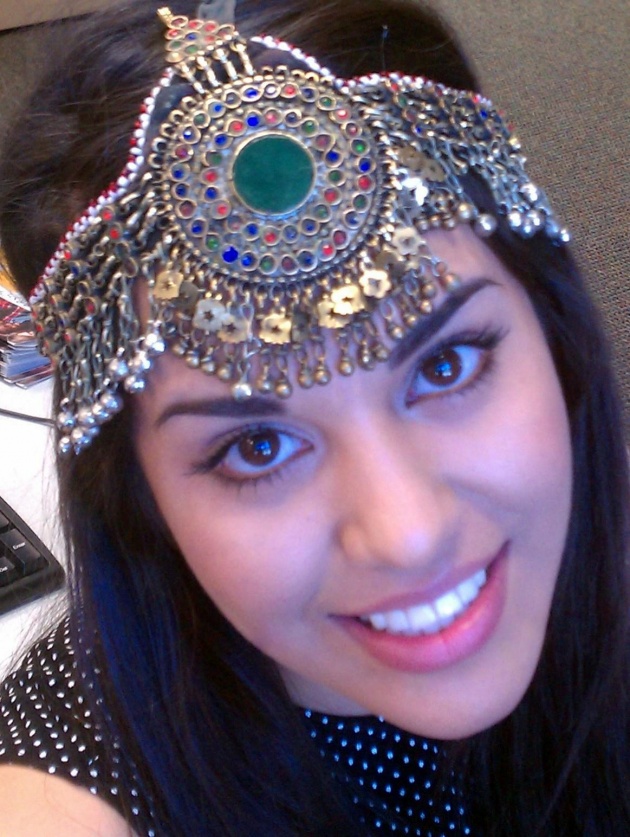 Persian miniature art. Most people then believed that these were the only two art forms allowed by Islam. When Ghulam came back from Germany, he built Afghanistan’s first School of Arts to teach Afghans the art of painting in more styles.  So less than a hundred years ago there were only three Afghan art masters in the modern sense: Ghulam, Brezhna, and a third great artist named Abdul Aziz.  It’s very interesting.

Today, the Taliban have been removed from power and Afghan artists are free to paint in all different styles.  These range from the modern to the ancient, and many combinations of these.  Afghan artists are very creative.  But sometimes it is still hard for Afghan artists to promote their work there, because of the fear of being killed or other problems. 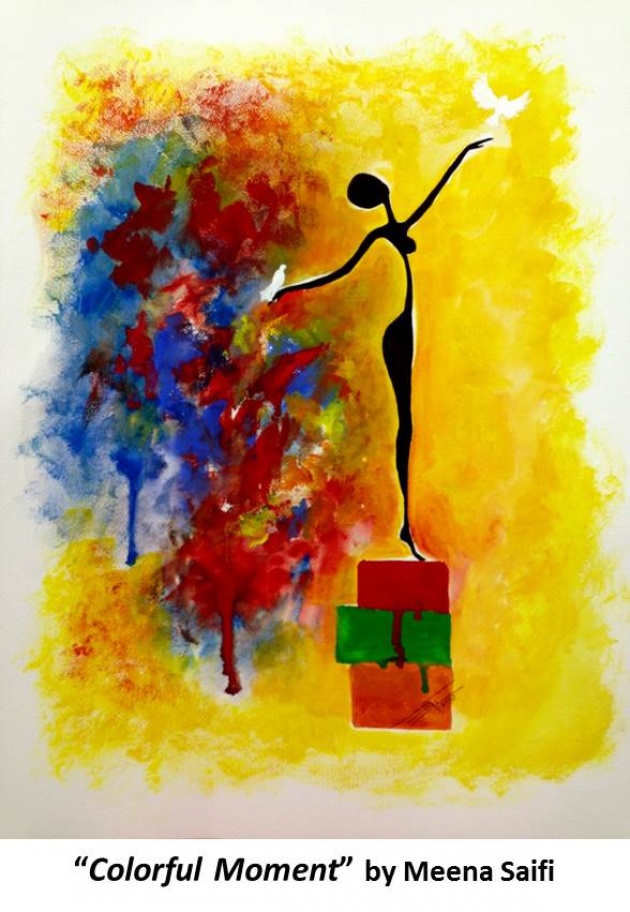 FA:  It is well-known that the Taliban oppose the painting of living things.  They even made it illegal when they were in power.  They are against most types of art and music in general.  What would you say to someone who says that you should not paint? 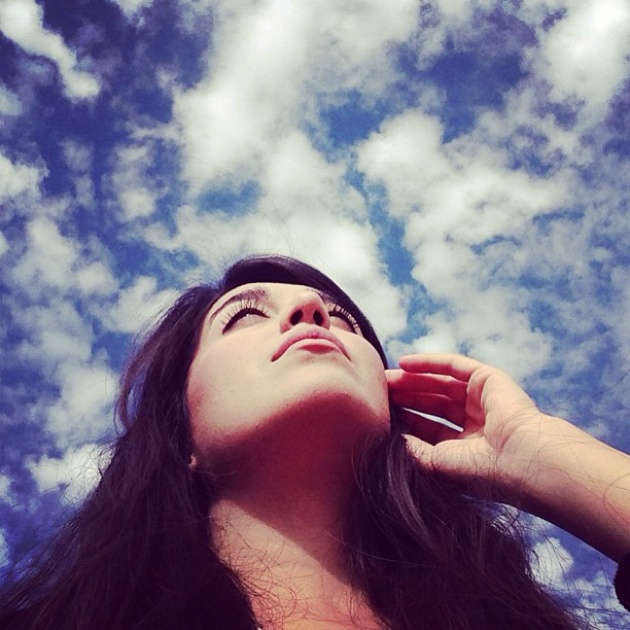 MS:  First of all I would say that the universe that we live in is a work of art.  We live in art. The beauty of nature around us, the high blue sky, starry nights, colorful rainbows, flowers all around, humans, animals, such beautiful creations.  It’s all art!

And the voice of rain, the singing of birds, the waves, even the sound of air is all music.

How lucky we are, to live in a work of art where the music always plays!

Art is a natural thing.  It shouldn’t matter whether you are a man or a woman either.  But unfortunately sometimes society, closed minds, and life situations can build strong walls around an artist.  That can be true anywhere.  But an artist must be strong enough to break those walls down. I am a woman, and I was in a situation like that.  But I chose art. That is the only window where my soul can get some air. 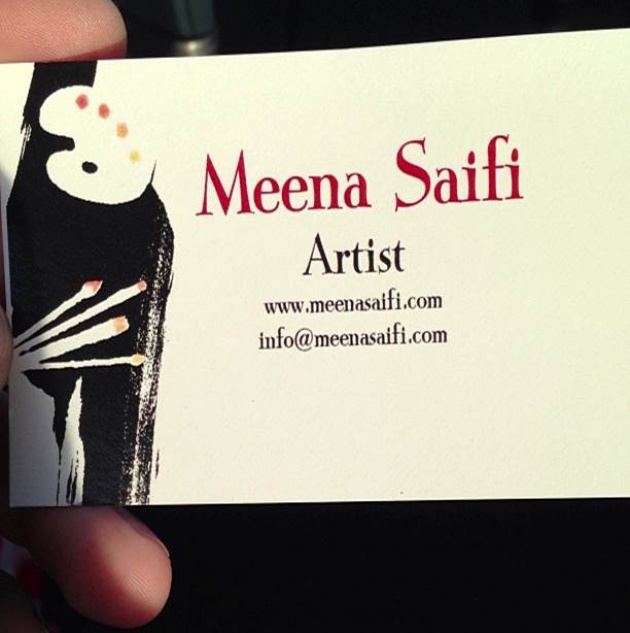 FA:   How can people see your artwork?  Do you have more shows coming soon?  What are your plans for the future?

MS:  I have a website, www.meenasaifi.com. I have several upcoming shows in New York, Washington D.C., and Las Vegas.  I also have accepted an invitation to participate in the Rumi Awards show, and am supporting that event any way I can.  The Rumi Awards are great for the future of Afghanistan, and as I said earlier I have a great love for Rumi’s poetry.

As for future plans, I have many projects underway.  One of them is with two other artists, and we will have our exhibition soon.  I’ll be happy to talk about that with you when the time is right, hopefully soon.

FA:  Meena jan, we would enjoy hearing an update about that exhibition in our next interview with you.  As the Afghan Proverb says, Yaar zenda sohbat baqee. یار زنده صحبت باقی.  (As long as the friendship lives, there will be more conversations). 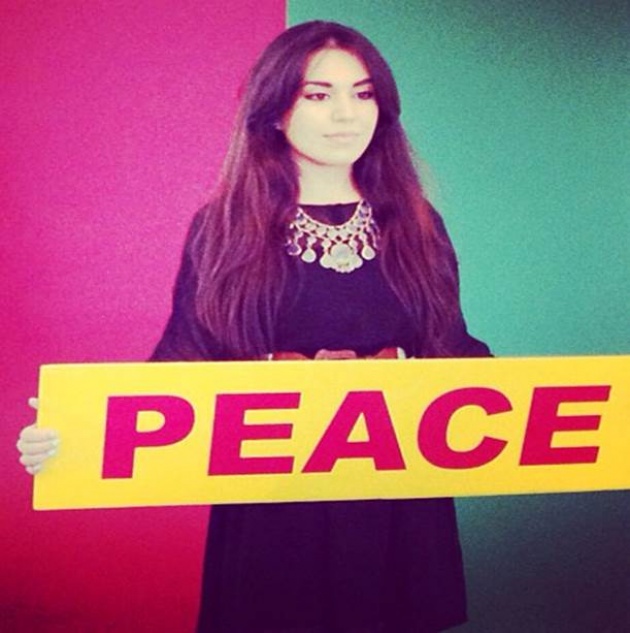 Until then, one last question:  Can art help the cause of peace in Afghanistan?   If someone asked you to do one painting that would represent the future of Afghanistan, what would you paint?

MS:  Yes, the arts can definitely help.  I know in my heart that Afghan art can help bring peace to Afghanistan.  Anyone who looks will see that Afghanistan's artists, musicians, poets, and filmmakers are working incredibly hard to send messages of peace through their art.  This new generation of Afghan artists will help bring peace!

I have a recent work on this subject that I will unveil soon.  It’s called "Peace in My Homeland."  Here is my life’s philosophy in one sentence: “My world is Art, and the foundation of that world is Love, Peace, and Freedom.” 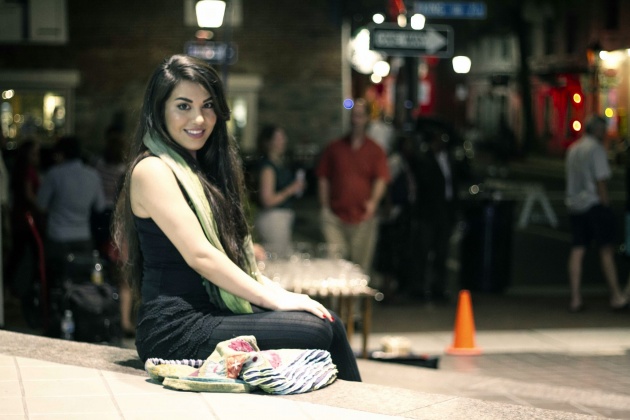