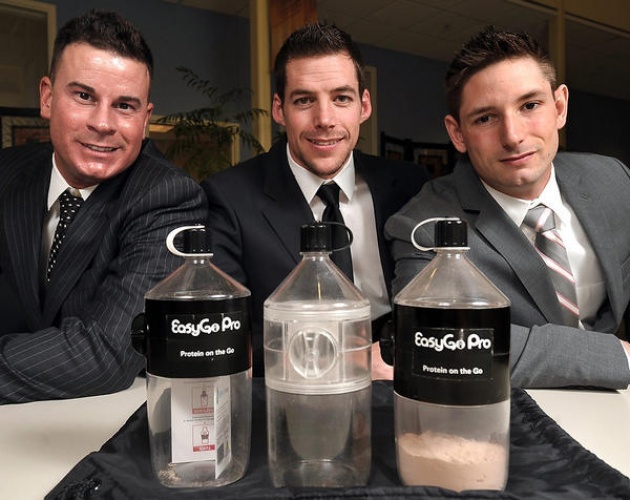 Michael Pett, Blake Schroedter, and Tony Genovese met while serving the United States in the Illinois Army National Guard. All three were deployed to Iraq in support of Operation Iraqi Freedom and Blake and Tony were later deployed to Afghanistan.  While on deployment, the three friends realized there was no easy way to make an instant protein shake, a common source of nutrition for combat soldiers. What they really needed was something portable and convenient to store, carry, and dispense a pre-measured amount of protein powder. Upon returning home, the three veterans teamed up to develop the EasyGo Pro™ Dispenser. In discussing this with friends and family, they realized that not only did combat soldiers and fitness enthusiasts need this product, but anyone who used baby formula as well, and the EasyGo Baby™ was born.

We talked to Pett, Schroedter, and Genovese about their thoughts on the Film Annex initiatives in Afghanistan, the Afghan Development Project and (G.I.V.E.) - Global Initiative for Veteran Entrepreneurship. Film Annex built the first internet classroom this week right outside of Herat. Below is our interview.

Film Annex: What do you think of Film Annex's initiatives in Afghanistan?

Michael Pett: I take great comfort in knowing that efforts are being made to help re-establish Afghanistan.  It is far too common that there is this sense of “get in and get out” when countries are at war.  It is imperative that a re-building can occur in order to re-establish the infrastructure of Afghanistan and help it stabilize its economy.  Film Annex is a unique way of illustrating the accomplishments that are being made not only within the country but also with the Veterans who have served there.

Blake Schroedter: I feel that Film Annex has devised a simple but brilliant way to solve the huge problem of illiteracy and lack of education in Afghanistan. One major barrier to educate Afghans is the safety and security of foreign education staff. By setting up a web-based approach, you are overcoming this barrier.

M.P. I feel  digital and social media is the easiest way to help change political ideology and further capture the true efforts that are taking place on the ground in Afghanistan.  The will to succeed is there and as long as the equipment and technology are made available, the people of Afghanistan can rebound both financially and educationally.  It is also important to educate other countries as to why these resources are necessary.

T.G. In the future yes, but as of right now most citizens of Afghanistan do not have televisions, computers, or internet-nor do they know how to use them.  I feel like in the right region and at the right point in time computers will be vital, just not now.

B.S. Education is the key to success. We have already seen this prevail in Afghanistan with the use of Afghan interpreters who have secured a steady income in a down economy through their increased educational ability to speak multiple languages to include English over their peers. My interpreter was a very intelligent individual with a drive to come to the U.S.; I feel that he has a very strong chance of reaching that goal.

M.P. Digital media is an amazing option to implement into the educational system.  More and more schools in the US are utilizing MAC, PC’s, and IPAD’s to help children learn.  I am not saying that just because we use it in the US means that it is good for Afghanistan however, we are in a digital age and children can have answers at their fingertips if the technology is made available for them.

T.G. Efficient, maybe, but I do not believe that digital media will be as effective as an in house teacher.  In addition the schools do not have computers (typically) or ways to update/maintain them.

B.S. I believe that it is the most efficient source due to a security standpoint, but nothing beats educating individuals in a direct person-to-person approach.

M.P. Sustainability can be determined by how much and how often this technology is made available.  Cultural and religious beliefs can often dictate the use of applications for learning and living.  As long as the technologies are made available regardless of socioeconomic status then all children will have the opportunity to advance.  In regards to finance, by stepping into the digital world, Afghanistan will be able to have real time facts, figures, and numbers as well as the tools and information to succeed as opposed to primitive technology and information that impede growth and stabilization.

T.G. Advertising is an interesting concept.  Currently the only billboards/advertising I saw in Afghanistan was Roshan (cell phone Company) billboards.  I believe this is because cellular phones are one of the only items everyone in Afghanistan has.  Advertising may help grow other businesses therefore help sustain the country.  I do not believe that digital media is the way to sustain Afghanistan’s educational system simply due to the lack of in place digital equipment throughout the entire country. (Tony Genovese)

B.S. Based on my experiences in Afghanistan every Afghan has a cell phone. The lower SES villages that I came in contact with did not have any other forms of digital media. In terms of pin pointing the individuals in these villages that are in the greatest need for education, it may be difficult. The shops and markets in these villages tended to have TV’s but I’m not sure if they had a lot of computers. I personally feel that this may be a great concept for the larger cities like Kabul but very difficult for the smaller villages. (Blake Schroedter)

M.P. It is my personal opinion that I feel it will open doors that were once closed.  The opportunity for advancement across all levels will allow them to create a sense of independence that has never existed.  Digital media can allow access to groups and ideas that could be liberating to all women in Afghanistan.

B.S. Depending where these women receive the education, it may help to allow more women to receive an education without fear of being killed or harmed. By educating more women and increasing the empowerment these women in the community you will likely see their voices rise up and demand civil rights. This may be difficult depending on the security of the country and their ability to protest without fear of being harmed. (Blake Schroedter)

M.P. Simply comparing US to Afghanistan, I feel that it is necessary for building structurally sound, safe, and digital friendly institutions of higher learning.  Creating a positive and safe environment for learning is detrimental to the success of the country.  I feel that if there will be financial relief given towards agricultural efforts then there should also be educational relief given as well.

B.S. I believe that it is a good investment if you can in trust the oversight of the schools with trusted individuals. In my experience there is a lot of corruption in Afghanistan and it is possible that the funds for these schools could be misused. It may be easier to manage these schools in Kabul and in the larger cities but more difficult in the smaller communities where the Taliban may have a greater presence and threat to the village members, individuals have a low SES and may be more prone to misusing funds, and overall security for the schools.

M.P. I have no way of measuring that but I feel that based on the fact that there is still fighting currently taking place in Afghanistan, a true rebuilding cannot take place which will in turn limit the speed in which the economy stabilizes.

B.S. If I were to make an educated guess I would have to look back at countries that were in a similar state and see how long it took them to increase their average yearly income. Or look at our own economy and triple that number. The greatest problem facing Afghanistan apart from education is the lack of resources to export. If the country can capitalize on the 1 Trillion dollars in untapped minerals it could be very helpful in establishing job security.

F.A. What is your opinion on (G.I.V.E.) - Global Initiative for Veteran Entrepreneurship and building veteran business opportunities?

M.P. I feel that G.I.V.E provides a voice for Veteran Entrepreneurs.  Most Veterans are not privy to an Ivy League education or resources and connections that come with families with successful backgrounds.  Veterans are typically working class to middle class individuals who are trying to create an identity within their respective community.  Veteran Entrepreneurs have a unique advantage simply by taking the core values and decision making that they have gained from the military and implementing it into their business.  G.I.V.E opens doors and creates introductions that are usually not available to most Veterans.

T.G. What better individuals to educate the Afghan people than veterans who know the culture better than anyone. We have seen the impoverishment and the low standards of living faced by the majority of the country. From a psychological perspective I believe this could be very therapeutic for returning veterans who left the country with a sense of hatred for the population of Afghanistan. Through educating the children of Afghanistan we can help detour the use of uneducated Afghans to execute attacks on the community.

B.S. I love the idea of G.I.VE. and believe that more organizations need to step up and take a socially responsibility to help returning veterans assimilate back into the community as business leaders.

More about the EasyGo Pro Team:

His professional experience includes eleven years of military service, a bachelor degree in psychology from the University of Illinois UC and is currently pursuing a doctorate degree in clinical psychology Military Track Program. OIF/OEF Veteran.

Joined the Illinois Army National Guard in 1998. Deployed to Iraq from 2004 – 2005 with 25th Infantry Division. Graduated with a BA in Sociology from the University of Illinois UC in 2007. He is currently a recruiter for the National Guard. OIF Veteran.

His professional experience includes eleven years of military service, US Army Ranger School, and owner and co-founder of a successful small business operating in Plainfield IL for over two years.  He is pursuing a Bachelors of Arts/Science in Marketing at the University of Illinois at Chicago.  OIF/OEF Veteran.

9 Questions to Ask in making a business plan