These sea creatures belong to the cephalopod class of mollusks. Yes, MOLLUSKS!

Unlike snails, clams, scallops, mussels, oysters and other shellfish, the Squid, Cuttlefish and Octopus do not have the usual outer shell that covers and protects their bodies. Yet, they fall under the mollusk class.

These creatures are thought to be the most intelligent invertebrates of their class. All of them are also excellent masters of camouflage. They have that unique ability to blend with rocks, corrals and vegetation rendering them almost invisible to predators. They can likewise change the colors of their skin to warn their approaching enemies.

A squid squirts black ink in defense and can speed away from its enemies in a blink of an eye. Watch the video above.

An octopus rapidly changes its color and is known to impersonate and take on the shape of several sea creatures.

Cuttlefish on the other hand are known to be venomous and can rapidly change colors to ward off predators. The display of brightly changing colors is said to be their way of communicating with other cuttlefish.

The octopus and the squid have eight tentacles while the cuttlefish has eight arms and two tentacles used to capture prey.

While all three may have similar defense mechanisms, here are some differences:

Cuttlefish feed on plankton, crabs, shrimp, fish and worms. They may attack and eat smaller cuttlefish and octopus as well.

Research shows that giant squids can grow up to 13 meters in length like those found in the Japan Sea.

The largest octopus known to man is the giant Pacific Octopus. It has a total length of 9.1 meters (30 feet) and weighed more than 600 pounds or 272 kilograms.

The largest cuttlefish on the other hand is found in Australia.

While incomparable to the giant squid and octopus in length, the largest cuttlefish can grow up to a miniscule 1 meter (3 feet) in length and can weigh over 10.5 kilograms.

Octopuses live in ocean dens or rock crevices and are ambush predators. They "walk" on the ocean floor using their tentacles in search of food. Squids and cuttlefish hover and remain still while hunting.

The octopus has a bell shaped body while both the squid and the cuttlefish have elongated tubular bodies. The octopus is a solitary animal while the squid live in schools.

Octopuses and cuttlefish grab their prey with their tentacles and inject poison with their beaks. Squids just use their arms to capture prey. The tentacles of squids have hooks along side its sucker rings while octopuses have the same powerful sucker rings but without hooks.

The octopus has no shell at all but it does have a thick and tough mantle or skin for protection.

These invertebrates make excellent dishes worldwide. I love eating squid but I don't think I can finish eating a grilled giant squid as huge as an electric post in just one sitting. Maybe I'd finish it in a week's time! LOL!

In the Philippines, particularly in my home province of Bicol, these sea creatures are rather miniscule in size, just enough to fit into a regular cooking pot or frying pan.

Here, we call the squid "pusit" (the giant squid "kanuos"), the octopus "kugita" (pugita in Tagalog) and the cuttlefish "kulambutan" (lumot in Tagalog). These marine creatures are commonly found on shallow reefs that abound our seas. However, you must have a very keen eye to spot them.

Remember, these three cephalopods are masters of disguise and optical illusion. They can be hard to catch. But sometimes I get a chance to see our native fishermen with a rare harvest of "baby octopus" we call "manala". I think it only has an arm-span of about 40 c.m. They are normally caught by hand.

Squids and cuttlefish on the other hand are caught by fish nets. I learned that the Thai's export baby octopi in frozen bulk to markets worldwide. 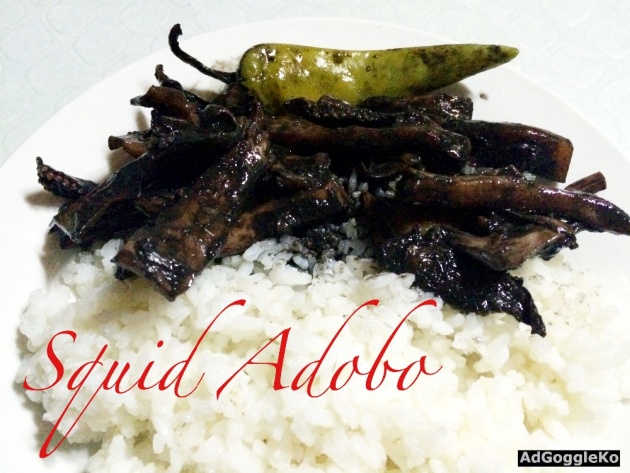 The most common Filipino recipe for cooking squid, octopus and cuttlefish nationwide is what we call "Adobo" or a dish of stewed meat in vinegar, salt, soy sauce, bay leaves, peppercorns and other spices like oregano, paprika, onions and garlic. Use of vinegar in this particular dish of mollusks makes it quite rubbery especially when overcooked. I only use vinegar when cooking Pork Adobo. 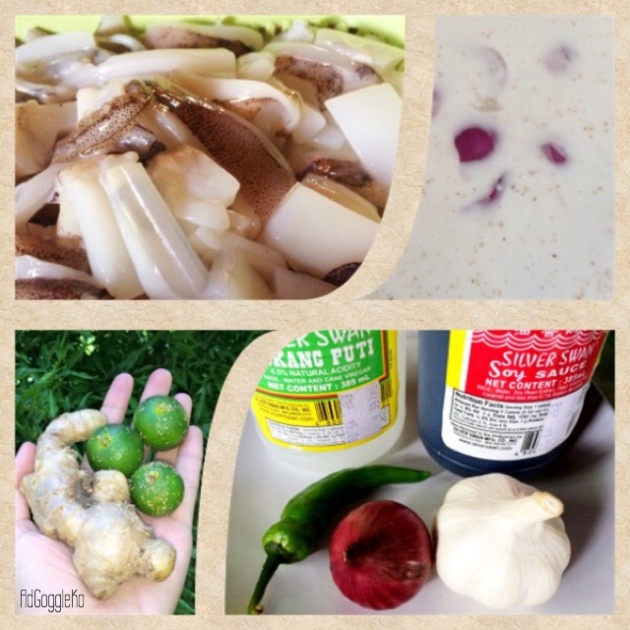 When cooking Squid Adobo, I use a native citrus fruit we call "Kalamansi", to make it sour, in lieu of vinegar. I also add the squid ink with corn starch to thicken the sauce. Being a blue blooded Bicolana, I always make it a point to add chili peppers and coconut cream rather than water. Yummy!

Aside from adobo, we also have sizzling squid, barbecue squid, spicy squid, stuffed squid or a plain and simple grilled dried squid. Aside from adobo octopus, it also can be served as "kinilaw" (Ceviche) or fresh raw and cube-chopped octopus cured in vinegar, citrus juices, and spiced with onions and chili peppers. Grilled octopus is also an excellent table treat. Cuttlefish is usually cooked in similar dishes like squid and octopus.

These dishes make great "pulutan" or "beer chow" sought after in pubs by our local drinkers. No matter how sneaky and cunning these cephalopods are, they will always find a final resting place on our tables. LOL! Let's drink to that, guys!

BOTTOMS UP AND CHEERS!

• 20 Freaky Facts About the Giant Squid