Action films about defenders or bodyguards - this is a classic! Another film on Netflix in the English version - CLOSE and my review on it.

Action thriller CLOSE is based on the story of real British bodyguard Jackie Davis. It is a very simple average female fighter where all the main roles play the female sex, although after watching you can’t say that the women need help.

The director and scriptwriter of the picture was also a woman, Vicky Jewson, behind whom there are two little-known films: Born of War and Lady Godiva. Of course, the new film did not go far from the previous films, but as part of the production, one can certainly see an increasing experience.

Do not expect something dramatic or original; by and large, CLOSE turns Noomi Rapace into the definition of Liam Neeson in a Skirt and, in general, is a film spiritually close to The Long Kiss Goodnight, Lucy, Atomic Blonde, Salt, just performed, it seems, with less inspiration and budget.

After the death of her father, the girl Zoe (Sophie Nélisse) becomes the main shareholder of a large mining company. The corporate giant lay claim to a phosphate mine in Africa, forcing CEO Rima (Indira Varma) to deal with capricious Zoe.

By the story, colleagues asked a security guard woman Sam Carlson (Noomi Rapace) to defend ZOE, the heiress of a large business empire. Having left with nothing, the offended widow and stepmother of the young heroine undertake a certain operation, as a result of which she must get the company for herself.

A few days later, being in another country, a real hunt begins for a girl, and now the bodyguard needs to take emergency measures to protect and evacuate the protected object. 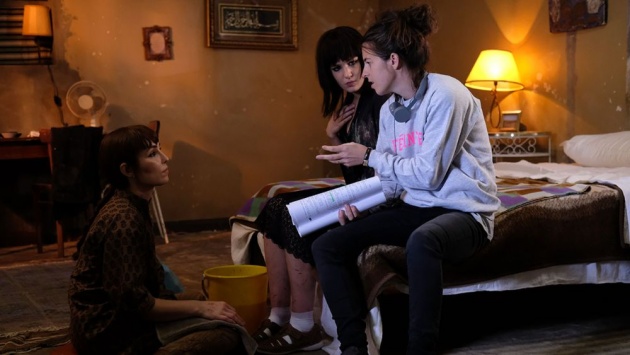 The director and scriptwriter Vicky Jewson has effectively implemented many action scenes and an abundance of bad guys that look quite menacing. However, to be honest, despite the peculiar feminist message (the film directly reports that of the 2,000 currently active bodyguards in Britain, only 5 are female), it is difficult to avoid the impression of a secondary nature. CLOSE lasts 94 minutes, but, apparently, there is nothing in it that was not before represented anywhere in the cinema.

In addition to all this, the plot of the painting also turned out to be so chewy, predictable and stereotyped that it demonstrated nothing remarkable in this regard either. Even dramatic notes designed to show that the heroine, so ruthlessly killing everyone and everything, is still a loving mother in her heart, whose maternal instinct makes her continue to defend the unbalanced millionaire heiress despite the contract term' the expiration.

CLOSE spends a lot of time on absolutely useless scenes where Rima, for example, deals with stock prices, etc. To add the financial details is a very strange decision for an action movie, but the creators really seemed to be sure that viewers want to see it.

Details of the plot here are told through the mouths of the characters, not shown, and that does not complement and enrich the quite ordinary script about friendships hardened in shootouts.

Everything was pretty predictable and mediocre. The fighter went forward, but it seemed to me that it was stagnant in one place. And the finale is too simple. The film is certainly not very large-scale, but it would be possible to make the ending more worthy. 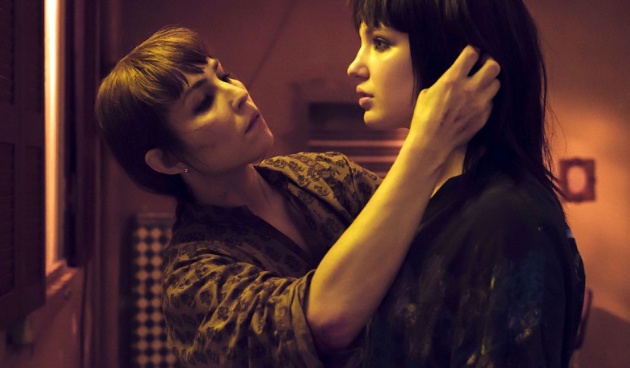 Watching such a movie is pretty boring, because the plot and production are very simple, and we see the irrationality in the actions of the characters more than enough.

The authors, of course, prescribed in the script both the story arch and the arch of the characters, but all this is not perceived with due interest since all the events are absolutely secondary, the motivations are mediocre, and intrigue as such does not exist. Even a small twist at the finale does not save the overall watching experience.

In the film, in addition to the action's part, we see the solid dramatic line. This is the only thing that I noted during tedious viewing. A lot of heart-to-heart talk and other tear actions. In all respects, I should have liked the movie, but alas, this film imprinted in my subconscious as a failure. 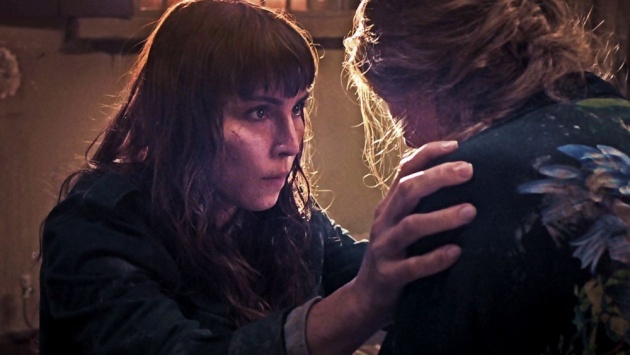 Well, again, the women's question. Again in the lead roles are women. There are three of them. The heiress of the great wealth that left to her after the death of the father, the bodyguard of the heiress, and the businesswoman — the stepmother of the heiress. The main character is a woman bodyguard. Another miracle woman.

If a woman conquers a man in a fight, it is not so much due to physical strength, as due to skill, willpower, and resourcefulness.

The heroine of Noomi Rapace, according to the authors, is copied from the real and famous bodyguard -Jacquieline Davis, who guarded Harry Potter’s mother, writer Rowling, and ladies from the British royal family. Naturally, no ominous corporates attacked them, and is there such a thing in life? It seems to me that they attack only the poor and the weak, from which it is easy to take the last. But who will make films about this and who will watch this? 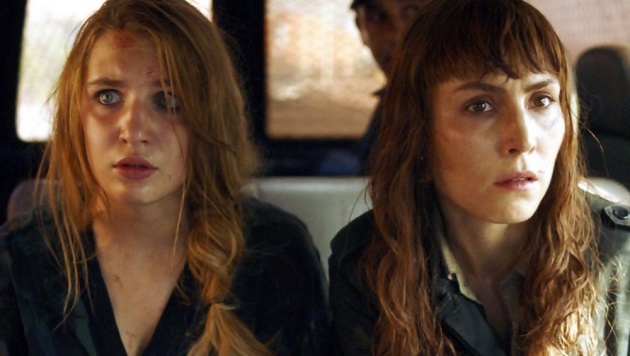 Several years ago, Sam performed various tasks on the territory of hot spots and was a great anti-terrorism training specialist. She was not afraid to penetrate the territory of the enemy and brilliantly performed the task. The heroine of the film has repeatedly risked her lifeguarding journalists from militants and terrorists in the most dangerous corners of the planet. But, the times of military glory are over, and the time has come to begin civilian life.

But, Sam did not have time to get used to the peaceful existence, when a representative of the richest family visited her offering very lucrative work. The heroine is hired to protect the heiress from the bandits. Sam didn’t even imagine, that being far away from the war, she would again have to fight with numerous enemies.

CLOSE tries to portray something that can be referenced to the protagonist's kindness and emotionalism, to make it closer to the viewer, but, in simple terms, it looks more like sweetness and manipulation. It feels like the director was more interested in demonstrating the physical form of Rapace and her fighting skills than of femininity, that is why it seems something important is lost - replace the main character with a man and CLOSE will not lose anything.

What happened to the family fire's keeper in the twenty-first century? Time ago she created a coziness permeated with warmth for a loved one. And now? All three female characters have faces erased beyond recognition. Rima - a businesswoman, devoid of the joy of motherhood. Sam - lost her personal happiness. Zoe - selfish nature.

Behind the entertaining cover is an unequivocal subtext of the psychological abysses.

CLOSE is action film from Netflix, made in the old traditions of the late 80s, early 90s. That is, there are no special effects and virtuoso fights, but there is a tolerable secondary plot when two people run away from their pursuers in a distant country. The film does not pretend to the cinema; it is for home viewing.

The film director did not deceive, saying in one interview that the battle scenes are as realistic as possible. Heroes do not do something in the style of James Bond or unbelievable. All according to the competence inherent in a real person with special skills. 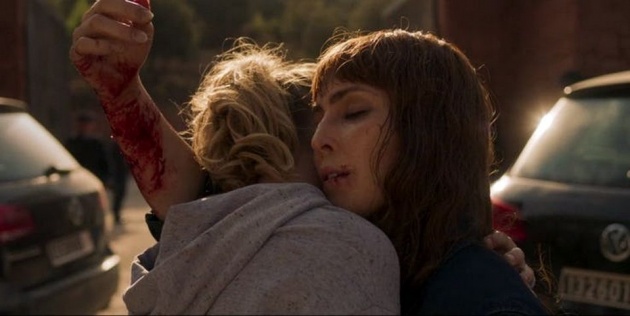 Operator Malte Rosenfeld and all his assistants did good work: plastic and color of the film, panoramic and views from the high, natural views of an exotic country - everything was up to standard. And the competent movement of the lens, timely change of the angle and viewing angles, especially in scenes with hand-to-hand fighting, helped Numi Rapas with average physical shape, and repeatedly. It allowed the majority of viewers who were unsophisticated in fists fights to perceive fights as high-quality, and for weaker sex to get moral satisfaction, albeit temporary.

The soundtrack, in my opinion, is average.

All my fight scenes, I did all my own stunts in all the fights. We were basically building the scenes around me and the way I move and how my body would react and how I would fight. I was very involved in the whole creation of the character and the fights, and her world, the surroundings of it. -  Noomi Rapace

The Collective Work of Actors

The main role went to Noomi Rapace, who has repeatedly proved that she can shoot films with increased physical exertion and tricks. On the screen, she simultaneously combines sophisticated femininity and focuses on the main goal - survival, without creating an image of a person alien to the emotions.

The actress Sophie Nélisse, who played Zoe, surprisingly looks matured compare with her previous role. And attention, basically, is worth focusing on her. On her acting, emotions, movements in the frame. In general, her acting left positive impressions, because, in several scenes from the film, she quite realistically portrayed both emotional panic, and hopelessness, and distrust. However, she still has something to strive for.

The stepmother of Zoe, Indira Varma, basically, keeps all intrigue of the film. She brilliantly, in my opinion, coped with the role of a caring stepmother and a businesswoman in one person, although I consider Noomi Rapace to be much more talented than the last.

Noomi Rapace, Sophie Nélisse, and the rest actors do everything in their power to make the characters emotionally attractive to the audience, but the plot destroys their efforts at the root.

Stylish action scenes full of suspense and a convincing central actress are clearly not enough to revive CLOSE. The film is all kind of rambling; there is little logic here, and unclosed storylines missed bright opportunities. Too many dubious plot tricks, repeated characters, and cliches, because of which CLOSE  simply does not work.

A huge number of such films already are shown in the cinema world. And the saddest thing is that CLOSE in no way differs in any way from the majority of similar action movies.

I watched this movie, and it did not touch me. This project from NETFLIX left me indifferent. Absolutely no details of this story could wake up my interest in this movie.

Even despite the participation in the film world-class star Noomi Rapace, the picture looks faded, sluggish, and mediocre. It does not save the situation, and the picture itself does not get any better from this. This is a movie that you can safely skip. But if you're a big fan of the actress, then enjoy your viewing.

In a word, although I watched the film to its end, I didn’t get expected satisfaction from watching this action movie. Although I’ll still recommend it, because I’m sure there will be those who will find the film more watchable, and it will be natural because tastes and the evaluation criteria are different for everyone. I just share my impression and opinion, without pretending to be authoritative.

Rapace gives the film her all, delivering an intense, physically demanding performance, but Close doesn't get close enough to transcending its action-movie clichés.