MUPPETS MOST WANTED – A Protest from the Puppets Union 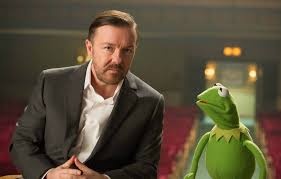 Do puppets have rights? This is not the first question I asked myself after I saw MUPPETS MOST WANTED – that would be ‘where’s the bathroom?’ followed by ‘where’s my scarf?’ followed by ‘oh dear, not again!’ Nevertheless, reflecting on the follow-up to the 2011 MUPPET re-boot – this isn’t to say they got new footwear, rather they were given more appalling puns – I wondered whether a member of the Puppet Union might make representations to the Disney Corporation or director James Bobin and co-writer Nicholas Stoller to complain about the treatment of beloved franchise characters. (Do I love them? No, but I can see the appeal.) Here’s how the letter might read.

(Exaggerated cough, followed by retching, spasms, flailing arms, drowning in mid air.) Dear Messrs Bobin and Stoller, I have seen your latest MUPPET caper and I should like to complain. For too long, puppets have been given thankless parts in movies. Not for them, the great acting challenges of the theatrical canon: HAMLET, KING LEAR and MAN VERSES FOOD. They have been forced into the ghetto of the comedy genre, given two-dimensional parts, inferior storylines and, worse, television star co-stars. A puppet might be called Oscar but can never aspire to one? How can they aspire to something more? (I ripped off that line from the MAN OF STEEL trailer, the best bit in it.)

Let me first of all say that I found the 2011 MUPPETS movie an agreeable treat. It paid homage to MUPPET iconography and re-introduced them as fishes out of water – or frogs out of water, to be specific about Kermit. It showed how their image had been corrupted over time and how, in the classic American way they could be re-born thanks to another puppet named Walter and characters played by Jason Segal and Amy Adams, the latter a genuine movie star.

When humans turned up, they were cast to type like Jack Black playing himself, in a therapy group for traumatised rockers, or turned up unexpectedly like Mickey Rooney and the actor who plays Sheldon in THE BIG BANG THEORY. I was not sure what Zach Galifianakis was doing there, but I’m not sure what he is doing in the majority of his movies. Someone put a nappy on him and pass him to a wet nurse, now.

MUPPETS MOST WANTED begins where the original left off, literally, except that Adams and Segal have been replaced by stand-ins. Already we are in the realm of ‘cheap knock off sequels’. Worse, we are treated to an opening number, ‘The Muppets Again’ that is nowhere near as an entertaining as its counterpart in the original – the tune still reverberates in my head, if not the words, sorry Oscar winning lyricist Bret McKenzie.

Now, for those in the show-business know, THE MUPPETS AGAIN was the original title for the sequel, only it tested badly, just like the Wright Brothers original designs – I never understood the one with feathers, myself. They could at least have changed the lyrics for the opening number. I mean, what does it cost to re-dub it?

Still, then we come to the small matter of the plot. Somewhat improbably, Kermit the Frog has a double known as Constantine who is a master criminal, distinguishable only by the mole on his cheek, and the Russian accent, and the lack of humour and the fact that he wants Crimea to join Russia to have territorial control over its resources and the Black Sea Fleet – well, maybe not the last part.

If what I understand from the original movie is correct, Kermit the Frog is an icon. So if there is another frog that looks almost like him, well I would have thought people would have been alerted to this. Is the movie saying that all frogs look alike? Can someone examine the sub-text please?

My main complaint is the derivative nature of the story. Why would Kermit allow Dominic Badguy (Ricky Gervais) to arrange a European tour? Surely now they have re-opened the Muppet Theatre they need to keep it open with the Muppet equivalent of CIRQUE DU SOLEIL or JIMMY KIMMEL LIVE, for those who know Hollywood Boulevard. They certainly shouldn’t hire their theatre out for an offensive movie – please see the Vine Cinema just down the road.

You don’t get political satire in a MUPPET movie and I say why not? What we have is a PRISONER OF ZENDA knock-off, as opposed to PRISONER OF ZELDA which I think is a video game, or F. Scott Fitzgerald during his marriage.

So the Muppets arrive in Berlin and play next door to a famous art gallery. Christoph Waltz is the special guest star and he performs a waltz – I’m not sure that is anyone’s idea of entertainment. Mr Waltz is the nearest the film has to an actual movie star; two Oscar statuettes as Best Supporting Actor in the credit column, WATER FOR ELEPHANTS in the debit. Meanwhile Dominic and Constantine, who has escaped from a Russian gulag and re-joined his Number Two, steal a priceless artefact. Kermit, who is out for a walk and gets frog-napped, takes the fall.

He ends up in the Gulag which looks remarkably like 30 Rockefeller Plaza. All right, maybe not but Tina Fey is there with a Russian accent and set of relationship problems – why was there never a sequel to MEGAMIND – and no Alec Baldwin to help her out. Mr Baldwin had his equivalent of JIMMY KIMMEL LIVE and then let his mouth run away with him. We don’t like actors for their opinions. George Clooney, take note.

Fey runs the Gulag as 30 ROCK’s Liz Lemon ran the writers room. There is a convict with a baseball cap that reads differently each week. Well, maybe not but there is Ray Liotta and Danny Trejo plus an actor I didn’t recognise. Kermit is brought in to improve the prisoners’ show which offers the only half-decent joke that I won’t spoil here.

Whilst Kermit rots away in jail – not literally, puppets don’t rot, they gather dust and get replaced by new icons, MOSHI MONSTERS – arghh, no, not the MOSHI MONSTERS – the others continue their European tour. They do a gig in Spain in which Salma Hayek is chased by bulls and in Dublin where the co-star looks suspiciously like Saorsie Ronan, though I didn’t see her name in the credits. The climax takes place at the Tower of London where Constantine is due to marry Miss Piggy – if anyone knows he isn’t Kermit, it’s her, but this is Muppet logic that we are talking about.

Meanwhile Interpol is trying to solve the series of art thefts in the form of Sam the Eagle and Ty Burrell from MODERN FAMILY. Look, they’re just not taking it seriously. The 2011 MUPPET film had Emily Blunt reprise her role from THE DEVIL WEARS PRADA; where is the genuine surprise here?

I’d love to tell you that Walter, Fozzie the Bear, Gonzo and Miss Piggy had interesting things to do but they don’t. The film is dominated by Constantine whose mantra is ‘do whatever you want?’ I did expect more inspired anarchy, but this is a film designed for family entertainment, one where the only choice is NOAH or some lousy Renny Harlin HERCULES movie; let’s stay in. (Oh, I forgot: CAPTAIN AMERICA: THE WINTER SOLDIER looks good.)

There is a moderately good badge joke but you sit realising that this MUPPET movie has turned into the other inferior ones, because they have lost the reflexive element. They set up a Muppet Tower which pays off at the end, but it is not enough.

I say: if you cannot give a puppet something interesting to do, don’t take them out of the box. The audience gets bored, the puppets look embarrassed, well their handlers look embarrassed. Just no, enough!