Introduction:  It’s always both thrilling and humbling to be face to face with a rock star. That feeling never goes away no matter how many times you do it.  And that’s how I felt when I first met the great Nancy Hatch Dupree, the American expatriate, adventurer, author, historian and founder of the Afghanistan Centre at Kabul University (ACKU). She has dedicated half a lifetime to documenting and preserving Afghanistan's cultural heritage. 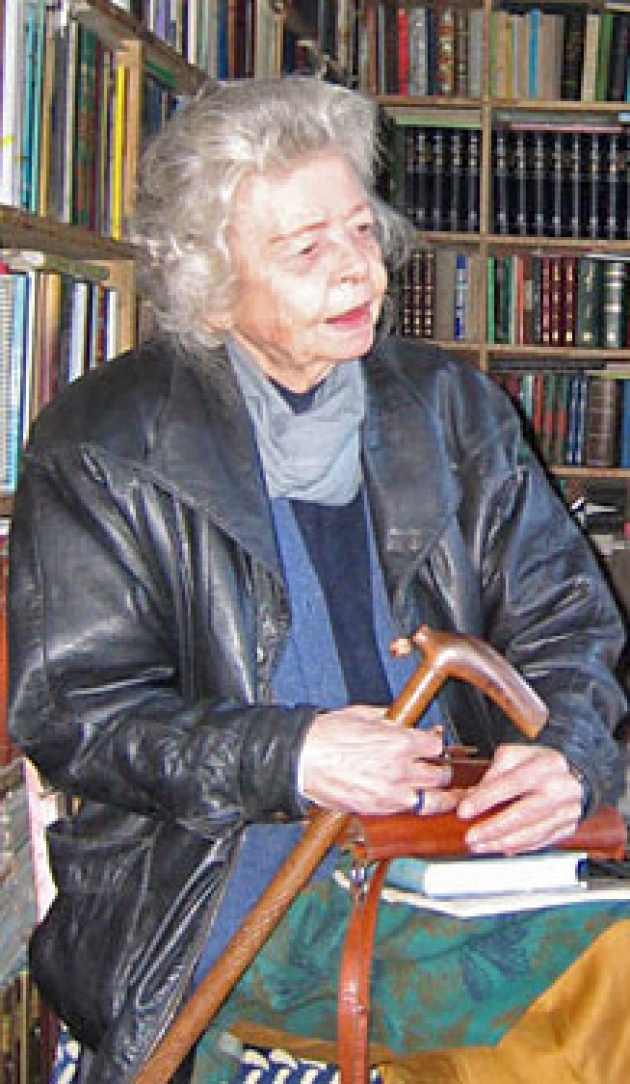 Nancy Dupree has been a real-life legend in Afghanistan for 50 years.  She moved to Afghanistan in 1962, where she began writing guidebooks on Afghanistan for the newly established Afghan Tourist Organization that quickly became classics. There she also met and married her late husband, the renowned archaeologist, historian, professor and ex-paratrooper Louis Dupree. They traveled, lived and worked together throughout Afghanistan.

A prolific author, Nancy Dupree has published more than a dozen books and chapters in books, and has written hundreds of essays and magazine articles on Afghanistan.  At the age of 86, she has for five decades been responsible for many internationally recognized initiatives to preserve Afghanistan’s history and culture for future generations.  She is the recipient of numerous high honors and awards, including the Islamic Republic of Afghanistan’s prestigious Gold Malalai Medal. It was presented to her by the former King of Afghanistan, Zahir Shah in a ceremony at the Afghan Presidential Palace in 2006.

This is the first in a series of Film Annex interviews with Nancy Hatch Dupree. She speaks here with U.S. Navy Captain Edward Zellem, author of “Zarbul Masalha: 151 Afghan Dari Proverbs.”

Film Annex:   It’s a privilege to speak with you about your work, Mrs. Dupree.  Please tell us about the founding of ACKU, and how it has helped Afghans and the cause of peace in Afghanistan.

Nancy Hatch Dupree:  Please, call me Nancy. The seeds of what we now call the Afghanistan Centre at Kabul University (ACKU) were planted in 1989 in Peshawar, Pakistan by ACBAR, the Agency Coordinating Body for Afghan Relief.  ACBAR was a consortium of NGOs dispensing humanitarian aid to refugees who had been fleeing Afghanistan since the Soviets occupied the country in 1978.  So at that time, what eventually became ACKU was called the ACBAR Resource and Information Centre (ARIC).

ARIC served as a general depository for information on Afghanistan. We collected and catalogued surveys and reports that were generated by NGOs, international bilateral donors, and UN agencies providing humanitarian aid for Afghan refugees in Pakistan, as well as relevant reference works and books. 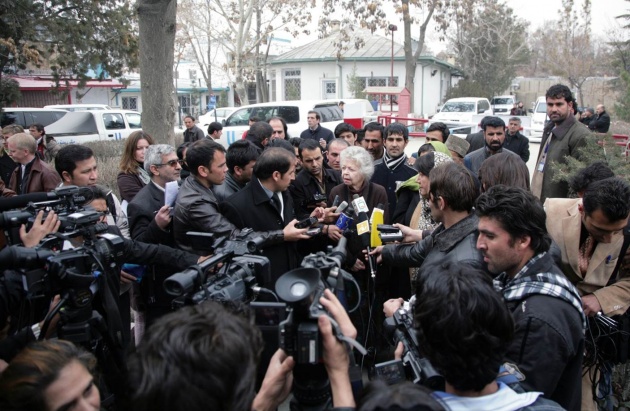 We had two objectives in building the ARIC, and you must keep in mind that this was a rather complicated time in Peshawar. NGOs from various nations had set up offices in Peshawar, mostly working independently.  So ARIC’s short term objective was to create a central depository of information to discourage duplication, minimize  confusion, and help the maze of aid workers and agencies build on previous successes and thereby avoid past failures.

The long-term objective, based on the study of Afghan culture for over two decades at that point, was to determine which approaches would be accepted or rejected by the various Afghan refugee populations.  Many of them were from very remote tribal areas in Afghanistan never before reached in the past. As Louis Dupree, who was the first to recommend the formation of such a central depository observed, the information we were collecting at that time and place would be invaluable for development workers after the civil war ended and repatriation to Afghanistan began.

FA:  So what did ARIC do after the Taliban regime fell in 2001 and the refugees in Pakistan started repatriation to Afghanistan, as you and Louis Dupree had predicted twelve years earlier?

NHD:  After the departure of the Taliban in 2001 most aid agencies hurried to Kabul.  ARIC did not follow because it was too vulnerable: having no back-ups, one US “daisy cutter” bomb or one mullah with a match and all our books and documents would be lost.  However, we did open a small branch office at the ACBAR Kabul office in 2003. Then after an Afghan President was elected (December 2004) and a Parliament was put in place (October 2005), in 2005 we moved the very large ARIC Collection from Peshawar to Kabul.  ARIC was renamed the Afghanistan Centre at Kabul University (ACKU) and was registered as an independent organization with the Ministry of the Economy.

The next challenge was where to put the ACKU Collection, by then grown to over 36,000 items. Space was a burning question until the then-Chancellor of Kabul University, Dr. Ashraf Ghani, together with Librarian Rehana Popal, generously offered space in the Central Library of Kabul University for the ACKU Reading Room and library stacks. I particularly would like to emphasize that we have always made every effort to work in cooperation with the Afghan government and its Ministries, Kabul University, the Kabul Museum, and many others.

Since 1996, ACKU has extended its services to over 200 smaller libraries in all 34 provinces

Because new documents were added daily, the Collection kept growing.  By the time it had reached over 70,000 documents, ACKU ran out of space. To accommodate these treasures, we temporarily had to move the ACKU administration staff to a garage in the Transport Compound on the Kabul University campus.  President Hamid Karzai kindly took an interest in ACKU’s space problems, and in 2007 directed the Ministry of Finance to allot two million dollars to build a dedicated facility for ACKU at Kabul University.

Due to a number of bureaucratic hold-ups, the new building is only now in its final stages in January 2013.  The Collection is being moved as we speak, despite a hard winter and two major snowstorms. ACKU’s electricity plant has yet to be connected with the Kabul city power supply. This means that our fully-installed IT system is not operational yet, but it will be soon.

The new ACKU building is nearly complete and will open soon

FA:  We’ll talk more soon.  But in the meantime, please tell us about your vision of ACKU’s future and what you have built together with Afghans.

NHD:  Today, more than a thousand students and other users visit the ACKU Reading Room each month.  We have a professional and tireless team of cataloguers and digitizers working in the stacks.  As the world becomes more interconnected through the Internet, digitization of the Collection has become very important to us.  We want to share it with the entire world and increase the knowledge and understanding of Afghanistan. But the primary purpose is to share information with universities, libraries and communities around Afghanistan. 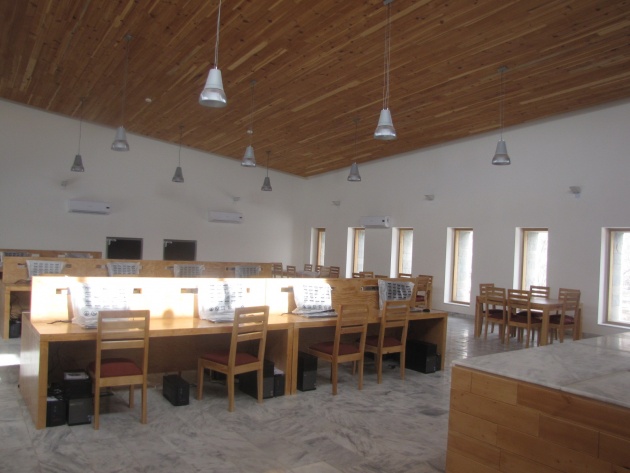 ACKU’s motto is “Sharing Information for Nation Building.” And we mean what we say. Digitized documents will be shared with planners, program implementers and future leaders, including students and faculty members in Afghanistan and abroad. The documents in our Collection cover a wide range of topics: politics and economics, agriculture and industries, mujahideen and Taliban newspapers and magazines, health, history, cultural heritage, music, poetry and Afghan literature.

There is also an audiovisual section with historic video footage, including NGO activities, as well as thousands of photo images of the country and leading personalities. Many requests come in from readers and researchers abroad through the ACKU website.  ACKU is now regarded as the richest source of information on Afghanistan in the region.

FA:  We’re really looking forward to our next interview with you.  But one final question.  You’ve been doing this for 50 years.   What do you hope people will be saying about your life's work 50 years from now?

NHD:   I hope they will have some element of respect for what I tried to do.

FA:   Somehow we don’t think you have to worry about that.

This is the first in a four-part series of exclusive Women's Annex interviews with the legendary Nancy Hatch Dupree.

Part 4:  Rebuilding Afghanistan, One Book at a Time