New York, NY: September 15, 2013 – In a week when most international news from western Afghanistan focused on an attack on the U.S. Consulate in Herat, a major milestone for Afghan education happened at a local high school just a few miles away. 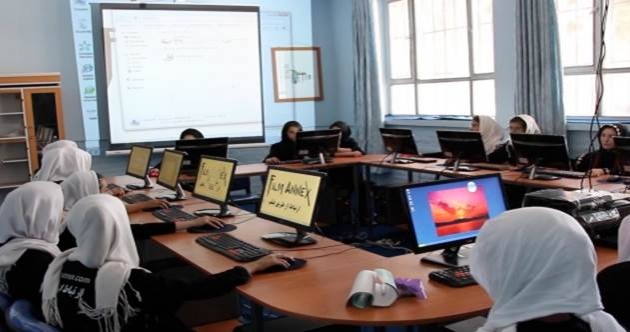 This new Internet classroom is tailored to meet the specific educational needs of the high school’s 9,000 students.  It brings Goharshad Begum High School into a Film Annex/Women’s Annex Internet network that now includes over 40,000 young Afghans at ten high schools in western Afghanistan.

This newest high school in the Film Annex educational network is aptly named after the 15th century Persian Empress Goharshad Begum, who is renowned by Afghans for her patronage of the arts and education.  Now, the Afghan high school bearing her name carries on that tradition more than 650 years later in a high-tech way that the Empress would have applauded, but could not have imagined.

“Today, there are nearly 40,000 Afghan students on the Film Annex network we have built,” says Francesco Rulli, Film Annex founder and president. “Most of them are Afghan girls, because our focus is on women’s empowerment.  By this time next year, we expect to have 200,000 young Afghans online in our Film Annex Internet Classrooms. These students, and their educational and financial benefit, are our priority.”

The hardware and Internet connectivity donated to Afghan schools by Film Annex and Women’s Annex also comes with advanced education and tools jointly developed by the two organizations. This includes social media and filmmaking curricula, as well as proprietary Examer Vocational and Educational Software that is specifically built to the needs of Internet newcomers.  For many Afghan girls, it is the first time they have ever been able to get online - much less travel the world and create unique content via blogging, filmmaking, social media and the World Wide Web.

“These 40,000 young Afghans have already generated over 2.5 million social media connections and a tremendous amount of professional and semi-professional digital content,” says Rulli. “In addition to the tools and education they receive, we also reward individual students financially based on the quality of the content they create.  Our network is growing very fast.  Imagine what we can do in the near future, when we have  ten times that many students and content creators online.”

Film Annex and Women’s Annex plan to expand their efforts beyond Afghanistan, which has become the prototype for their business model.  “The core principles that drive Film Annex Capital Partners’ involvement are Digital Literacy and Sustainable Philanthropy,” says Managing Partner Mike Sweeney.  “Bringing these two business principles together is unique to Film Annex, and is very powerful for the people of any developing country. We are creating environments where both business and philanthropy can support each other in a proven, sustainable way.  This is a big step beyond traditional corporate social responsibility, and is good for everyone.”

Film Annex and the Women’s Annex Foundation expect to have over 200,000 Afghan students online by the end of 2014.

Film Annex Capital Partners, LLC is the venture arm of Film Annex, a leading online short film distribution, blogging and film financing platform. FilmAnnex.com is a market leader in the #PayForContent business model, with over 3.4 million pages indexed by Google. The Film Annex site has been ranked in the Quantcast Top 100 in the United States for unique visitors per month, and can be read in seven different languages. It has over 220,000 registered users, and benefits content providers financially through an ad-revenue sharing model.

Many women and children in Central and South Asia have no access to the Internet, or their access is limited. The Women's Annex Foundation, Inc. was established as a non-profit organization (501(c)(3) status pending) to facilitate, grow, and provide access to the Internet in Central and South Asia by building Internet classrooms in high schools, building Internet Media Centers, distributing mobile devices, providing social media education to achieve Digital Literacy, and providing financial benefit through Film Annex’s unique ad-revenue sharing model.