Next film shot, but still plenty to do

As the title suggests, The Wenlock Olympian Gliding Games is all shot and overall I'm pleased with what was filmed, especially seeing as I was a one man crew in the end. I say one man, but in truth, I have to thank so many people at the Midland Gliding Club for their support and help to achieve the results I wanted. I also have to thank those who lent and hired kit to me for an unbelievably low rate. I had offers from crew to lend a hand on individual days, but in the interest of budget, I felt I had it covered seeing as it was a seven day shoot.

It was a turbulent shoot which started in low spirits. I don't usually like to be camera operator and was experimenting in ways of using the camera I had for the job (Sony PMW EX1) and the unfamiliar characteristics it had. There was a tiny hair in the sensor which I couldn't remove which occasionally came into shot (rendering the shot unusable) and the viewfinder was loose and needed taping to the body to stop the rattling coming through the mic. In general however,  the camera in its purest form provided me with some pleasant surprises. Every so of ten I would find a feature or a hidden switch that helped my workflow. Problems aside, the camera became a companion and saw me well in the end.

Event day two was depressing, the hilltop airfield was drowned in grey cloud and with inactivity the order of the day, I went to a friends house to have some drinks and spill my soul. Somehow, I woke up the next day with a real spring in my step and never looked back. The weather picked up and much more interesting things became available to shoot. I was able to adapt a realistic schedule and focus on the more exciting aspects of what I aim to achieve.

The shoot wrapped on my birthday and celebrated with friends. the next day was beautiful weather which inspired me to shoot more things. I definitely bonded with the camera and passion for live action film making was reignited. I thought at the lowest point I might not know how to make films anymore and before the end I had regained and enforced the confidence and self belief I had during my time making '741'.

Now I'm back in London, I have full time work and a lot of post production to do. Despite that, I still have other irons that seem to be in a few other weak fires. With a good level of communication, the right flames will rise, but priorities now need to be set and big decisions may need to be made in order ensure I keep writing and stay creative on projects that are going somewhere.

Thanks again to the Film Annex community for the continued support.

I would have seriously struggled getting the production going without it 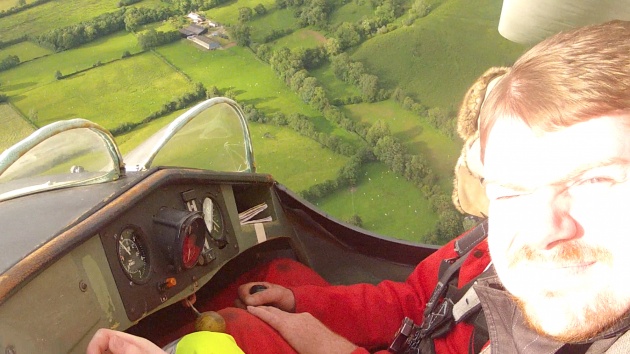 Me in a T21 glider on day 4. It was catapulted off a ridge by a giant bungee rope