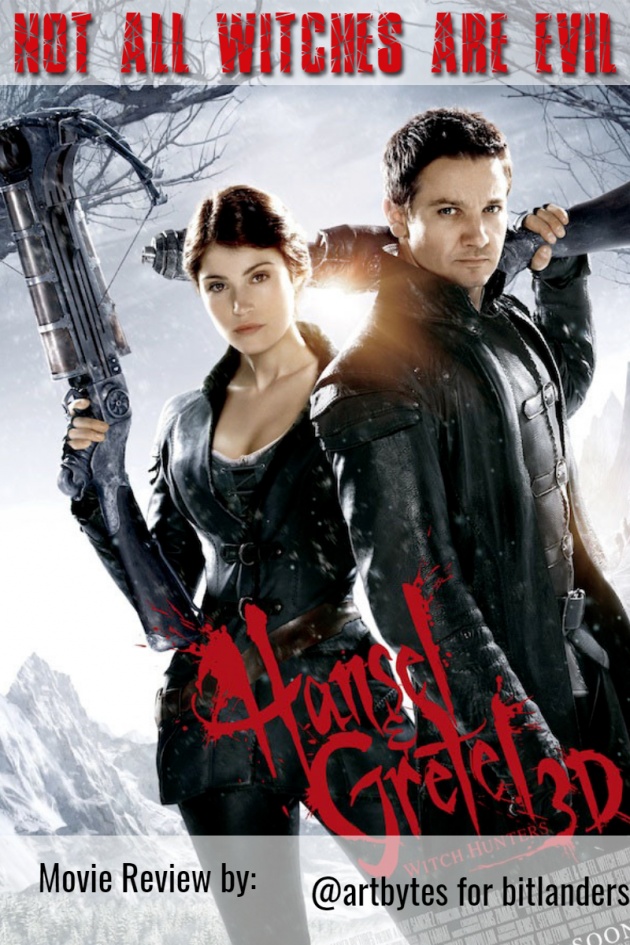 The opening scene of Hansel and Gretel: Witch Hunters

We are all familiar with the classic tale of the siblings Hansel and Gretel. The siblings that were left in the forest, got lost and found a house made of candies. It so happens that house is owned by an old witch...

In the movie Hansel and Gretel; Witch Hunters movie, the story did not end at where Hansel and Gretel returned to their home and lived happily ever after. In this version of the story, the sibling never saw their parents again. But they made a profession out of their experience in the woods. Killing witches!

After killing their first witch, the grew up to become witch hunters (for hire)! They hunted witches and saved hundreds of children all over the land.

The story continues many years later in a town named Augsburg. The town was besieged by witches and some children are reported missing. The town sheriff was about to burn a woman accused of practicing witchcraft. But Hansel and Gretel arrived in time to stop that from happening. The town mayor hired the siblings to help them with their problem.

The Sheriff is a power-hungry man and disrespects the mayor even in from of the townspeople. While Hansel and Gretel were preparing to start their hunt in the morning, the Sheriff sent his own hired group trackers into the woods that night. Hoping his trackers will find the children before Hansel and Gretel do.

But his trackers died a horrible death in the hands of the Grand Witch, Muriel.

As the siblings made progress in their investigation, they discovered a bigger plot behind the disappearance of almost a dozen children. The witches will have a gathering in the next "Blood Moon”. The said event will happen in the next three days.

The Witch Hunters captured a witch. During the interrogation, Gretel realized that the witches needed 12 children.  After deducing the pattern, they found out how the witches select their victims.

The Siblings trapping the horned witch.

With the reluctant help of the Sheriff, they identified the child that will be kidnapped next. But then, the witches attacked the town. They burned a house as a diversion. In the middle of the confusion, a troll took the child. Hansel got separated from Gretel during the attack. Seven townspeople died in the fire.

An incident that Sheriff immediately blamed on to the presence of the witch hunters and the mayor. Then he shot the mayor in front of the confused and angry mob.

Ben, telling Gretel the tale about a woman who was accused of practicing witchcraft.

In the next morning, Gretel woke up while being tended for by Ben. A teenager who idolized the witch-hunting siblings. As Gretel scans through the news clippings gathered by Ben, she realized what really happened to their parents.

Meanwhile, Hansel woke up hanging upside down on a tree branch. Mina, the girl they saved from the hands of the Sheriff was there looking up to him. After he fell from the tree, Mina tended to his wounds.

Mina found Hansel hanging upside down from a tree.

While Gretel was looking for his brother, the Sheriff and his men caught her and beat her. While they are doing their evil deeds on Gretel, a troll named Edward was watching from behind the trees.

The Sheriff was about to rape Gretel when Edward rushed from the woods and killed the sheriff and his men. Saving Gretel.

Edward, before he came out of the woods and killed the Sheriff and his men.

Hansel and Gretel crashed into each other in an old house. They both fell into a witch's lair hidden under the house. The house was the house where they used to live.

Then, Muriel, the Grand Witch appeared and revealed what truly happened that fateful night. Their mother was burned by the townspeople for witchcraft and their father hanged. They were brought to the woods to keep them safe from the mob.

Muriel also revealed the purpose of the children and why they need Gretel for their plan during the Blood Moon.

Muriel defeated the siblings and brought Gretel to their gathering leaving Hansel for dead.

The morning, Hansel came about and surprised to see Mina. He saw his stab wound closing. Mina admitted that she is a witch. A white witch. She and Ben volunteered to help Hansel rescue Gretel and the children.

Mina reveals to Hansel that she is a white witch.

Armed with unconventional weapons, the group set off to the witches' gathering.

After setting up their traps, Hansel crashed the witches' "party". With the help of Edward the troll, they freed Gretel and the children. Killing all the witches who attended the gathering. All except for the Grand Witch.

Mina, bringing down hell to the witches gathered for the Blood Moon

Back to the Candy House.

The story came into a full circle when they ended up back into the house made of candy. The place where it all started. They defeated Muriel in the same place they killed their first witch.

A Classic Tale With A New Twist

As the trailer describes it, Hansel and Gretel: Witch Hunters add a new twist to a very familiar children's classic. It did not focus on the story from which it originated from. But rather it focused on the events years after it happened and giving the original a twist.

The Characters Hansel and Gretel

Hansel, played by Jeremy Rener, is a typical hero archetype. Strong, courageous and reckless at times. After eating too much candy on that fateful night, he grew up with "sugar sickness" or better known today as diabetes. He heals quickly for a diabetic though.

Gretel, played by Gemma Arterton. is more calculating. While his brother Hansel tries to get the attention of a waitress with his story of how acidic a witch's piss is, she spends her time investigating and planning their next move. Clearly, she is the brains of their outfit.

The Witch Hunters after capturing the witch who lives just outside the town.

One of the unexpected twists of the story is the untold story of what Gretel really is. Born of a Grand White Witch (which is not in the original version of the story), Gretel inherited their mother's "gifts".

As described by Muriel (Famke Janssen), the dark witches cannot defeat a Grand White Witch. That's why she spread a rumor to the town folks that a witch lives at the edge of the town.

Before they were led to the woods that night, their mother cast a spell that protects them from the powers of the dark witches.

A fact that they now use to their advantage is hunting witches.

Not only they are armed with the power of a Grand White Witch, but their hunting team also gained two new members, Ben - the walking encyclopedia of witches and witch hunting, and Edward the Troll.

The Witch Hunters with two new members added to their team.

Not for Children Anymore

But this version of the story is no longer intended for the children. With all the blood, guts, brains and body parts flying all over (plus a light touch of nudity) it's a movie for the mature audience. Still, the movie is violently-action packed, spiced up with some humor and downright entertaining.

My Rating for the movie:

Let me leave you off with a couple of Querlo Chats.

Do You Support Women Empowerment?

If you are not a member of  Bitlanders yet and you are a content creator- a writer, blogger, photographer, an artist or a hobbyist, you can earn from your creations (blog posts, photos, artworks, or videos) by uploading them in Bitlanders.

You can join Bitlanders by clicking this link-> http://bit.ly/Join_bitlanders