Nowruz means new day in Persian, is reminder of green nature and a cultural custom of thousands of years. Nowruz is called by different historical reasons,  Jamshid the great king of Ancient Aria was crowned in this day and named it Nowruz. Nowruz was celebrated in different days of the year, in its honorable and difficult history. Then in kingdom period of Saljoghi’s , Khayam the great Astronomer and Poet of Persian set the Persian Calendar up by nature, and Nowruz became the first day of spring in the year. Therefore, it changed to the most precise calendar of the world. Nowruz the first day of the year is celebrated in different countries of Aria’s civilization zone, including: Iran, Afghanistan, Tajikistan, Turkmenistan, Azerbaijan, Islamic Parts of Russia, Sudan, Zangbar, all over Central Asia, West of China, Some parts of Middle East, some parts of Turkey, some parts of Syria and Iraq….

21of March was recognized as Nowruz day by United Nations in 2010. It is celebrated in one of the Nowruz zone’s countries every year, which is attended by presidents, high officials, foreigner diplomats, and guests from all over the world, which shows honorable and universal value of this great cultural legacy 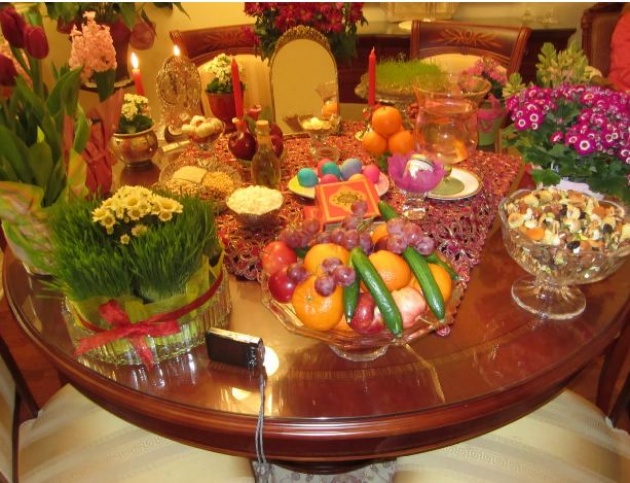 There would be some differences in Nowruz traditions of some countries. Nowruz Celebration is held gloriously in Afghanistan in Mazar Sharif, Center of Balkh Province, and the Nowruz Capital of Afghanistan. The Celebration goes on within forty days. In other parts of the country it is also commemorated widely, and celebrates it by holding concerts, Buzkashi Matches, Parties, going on picnics, spring vacations, friends and relatives’ visit, horse riding…. Special Nowruz traditions which are common up to now are as following: Samanoo or Samanac which is made of sprouted wheat and is a food that is only made once, in Nowruz. The second special custom is setting up haft seen tablecloth, which means a table cloth with seven special food of Nowruz. Haft seen special tablecloth is containing Holy Quran, Samanoo, Verdure, Vinegar, Garlic, Red Apple, Nuts and Sweets. The containing in different parts could be different.

Nowruz is a special day with special messages to human beings that Nowruz is reminder of ancient and valuable civilization of Aria and the power of God, the one who we believe faithfully, in spring. Nowruz shows that there is a spring after every winter, so live hopefully.