Oil Prices Beyond the Pump 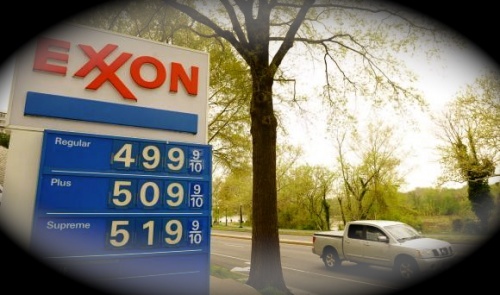 From changing political fortunes to increased food prices and hunger as potential consequences. Gasoline prices are hurting the consumer, but the impact perhaps is even more than usual beyond the pump. President Barack Obama speaking to the US-Israeli lobby group indicated how talk of war with Iran was actually having a contrary effect on to the recent sanctions imposed upon the Tehran regime. Rapidly rising petroleum prices were countering the effect of such sanctions by providing Iran with more revenues, even if it had to sell its production below cost. The impact of spiking oil prices though is significantly broader and perhaps more lasting: ---The US economy may already be under pressure as both higher uncertainty and energy costs choke-off the modest recovery. $5 Gasoline is near in most US states and would be unprecedented. It is my opinion that high energy prices as much as any bubble were responsible for economic recession in 2008. See our video for blog from February 21, 2012 – “$5 Gas, Then Recession, Then Obama Losses” diplomaticallyincorrect.org/films/blog_post/500-gas-then-recession-then-obama-loses/46298 ---High energy prices are President Obama’s chink in the reelection strategy, as they raise anger and doubt among voters and undermine his strong point of claiming and improving jobs and economy. ---The US is not experiencing any shortages, and to contrary supplies are ample and demand below peak levels of few years earlier. However, there is raking debate as to why refineries are cutting back production and some are closing. Both sides of debate as to why high gasoline are accusing each other of various conspiracies and manipulation. ---Who is getting rich from the spike? Is it speculators, Oil companies and/or oil producing states? Probably all of above-In US this amounts to a redistribution of wealth generally at expense of ordinary citizens and certain industries. ---Food production will be most severely affected. Food prices are inevitably likely to follow as petroleum impacts everything from fertilizer to production to delivery costs. Hunger will rise. ---Countries as Russia, Venezuela, Saudi Arabia, Brazil, Norway and certain Central Asian/Caucuses countries as well as Iran are likely to see rising revenues with enhanced diplomatic leverage. The greatest impact may be on Russia still continuing to resist transformation being able to depend on easy commodity driven trade and economy. ---Alternative energy projects/ventures may also see a boost as such appear to become more viable although there may be a lagging question of sustainability. The rapid rise may also deliver another 2008 type economic collapse. Regardless for now, someone is getting richer even as others have to pay more. This simple equation will translate to a shift in political fortunes within US and changing international diplomatic leverage on global issues. It is also another reason to take closer look at the rationale for prices – it’s clearly not just about demand and supply. If we have learned anything from the recent global economic crisis, it is that the free markets are not really free of undue outside influence. For many further current news event articles related to Libya, see our popular video blogs at “International Financial Crisis” Channel - diplomaticallyincorrect.org/c/international-financial-crisis By Ambassador Muhamed Sacirbey – Follow @MuhamedSacirbey Facebook = Become a Fan at “Diplomatically Incorrect” Twitter – Follow us at DiplomaticallyX