It seems that Spring is the time for film premieres. Last week, Film Annexer Mark Kuczewski released Falling, his new short film, exclusively on Film Annex. This "dramedy" is a must watch! It was shot with a Red Scarlet camera that Mark was able to afford thanks to the revenues generated with his Web TV. It gives a great soft and pastel-like color to the image, which fits well with the bitter-sweet and nostalgic atmosphere of the movie. Falling tells the story of an unexpected encounter between two characters who decide to jump off a building at the same time. While we await the making-of and the director's cut, take a look at some behind the scenes photos from the set!

Anderson West, who worked as a DoP on Falling, is also releasing his new short film, Rest, on Film Annex this week. We also expect to premiere the first episode of Lisa Stock's web series, Persephone, this month. More about those in next week's newsletter.

We follow our filmmakers' work closely but we are not forgetting about the rest of the indie film scene. Last week, Film Annex's Eren Gulfidan attended a screening of The Revolutionary Optimists at the UNICEF building in New York City. This inspiring documentary, directed by two female filmmakers, is a catalyst for change that we encourage you to watch. You can read more news on the film entertainment industry with our weekly newsletter and the line-ups for ECU and COL-COA film festivals, as well as the launch of a filmmaking prize by Sundance and TED.

More suggestions for you to watch... An interview with playwright and author Jenny Lyn Bader who recently visited our studio is now online. Bader talks about writing plays, co-founding Theater 167, and empowering women through theater. Meanwhile, Film Annex Founder Francesco Rulli presents his views on sustainable philanthropy and education and how women in developing countries can be self sustainable and financially independent.

Now, we delve into women's empowerment once again with Roya Mahboob, Film Annex's partner in Citadel of NY, who met US Secretary of State John Kerry. Along with other Afghan business women, she had the opportunity to meet with Kerry to present her work towards providing a better education to young women in Afghanistan and connecting them to the world wide web. She told Voice of America: "Online, women have a freedom that is still hard to find in some parts of Afghanistan." 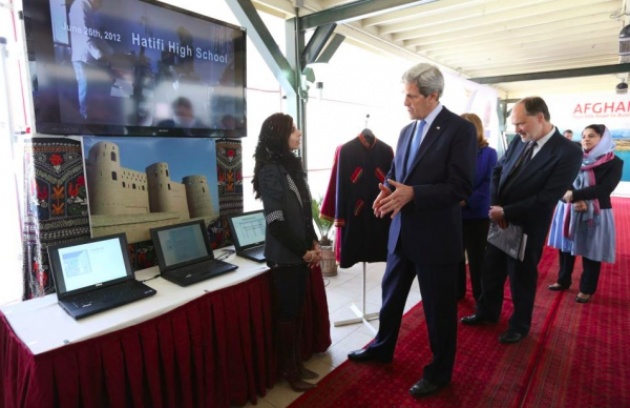 Roya Mahboob with US Secretary of State John Kerry.