Brasília and Niterói are the cities with the most number of works of the master of the arquitecture.
Niemeyer had only one daugther, four grandchildrens, and 13 great-grandchildrens. 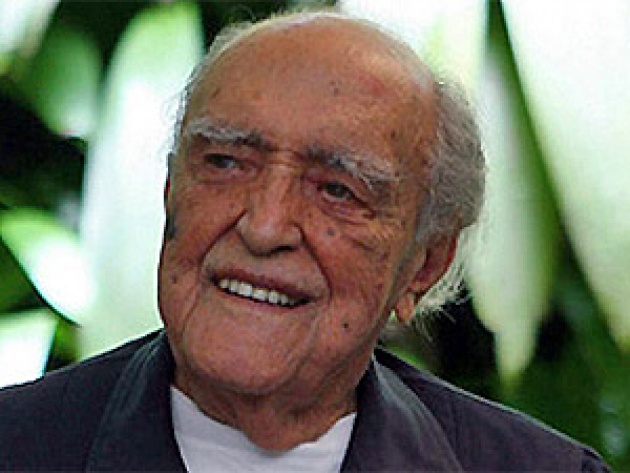 Photo of the 100th Birthday for Oscar Niemeyer.

The Brazillian arquitecture Oscar Niemeyer that died these wednesday at 21:55 with 104 years, was one of the most wineer award and influent professional in the world. Hes work always with lots os curves made in concrete that turns hes style unique and marked the urban landscape of Brazil and other countries. Oscar Ribeiro de Almeida de Niemeyer Soares Filho born on the neighborhood of Laranjeiras on the Sul Zone of the City of Rio de Janeiro on the day 15th of December of 1907. Passionate for soccer and the Fluminense Team, Niemeyer played for the Junior Team at Laranjeiras Club.

These is a Time Life Work photo from Oscar Niemeyer arquitecture (dont know why it be so little), but you can see the best works he did here.

Married early. The union with Annita Baldo was when he was 21 years old, when Niemeyer helps his father on the tipografy. In 1929, entered to the National College of Belas Artes on Rio de Janeiro where 5 years later get the graduation of Arquitecture Engineer. On the meantime in the College, in 1932, Borned Anna Maria, hes unique daugther, that dies in July of 2012.

The marriage with Annita Baldo, first wife, dured 76 years, when she died, in 4th of October of 2004. He married again in 2006, with hes secretary, Vera Lúcia Cabreira (she was more young near 60 years old).

the first steps on hes carrer that consecrates him with one of the more influent names on the arquitecture was made on the Lúcio Costa and Carlos Leão office, where he mades a non remunerate experience period. Niemeyer have the oportunity of meet another genious of the arquitecture because he was designed for Lúcio Costa to help Le Corbusier, famous Suiss arquitecture, that was only to pass from Brazil, in 1936, to colaborate with a project of a building of the Minister of the Education in Rio.

In 1940 Niemeyer meets Juscelino Kubitschek, mayor of Belo Horizonte, and made his first big project, the  Pampulhas Set, on the neightborhood of the Capital, that included a cassino, a Baile House, the clube and a Church of São Francisco de Assis.

The most important projects of the arquitect serves for ideological projects and political. Niemeyer projected the Ibirapuera park and the Copan building, both in São Paulo. In 1956, with JK on the presidence of Brazil, he organized the project plans for Brasília and was the responsable for the construction of the new Capital of Brazil

With an unique and modern design the proud soon of the modernism created the Itamaraty Palace, The Alvorada Palace, the Congress, The Big unique Cathedral, The Park of the Three Political Powers, and other buildings and e monuments: “We are beginig to imagine when Brasilia will Born. When sudently, apareared a Blue Spot on the horizon. She is growing. Then appears the contourns and we beginig to say: there is the Theatre, there is the Congress, the Tower. Brasília emerges like magic, a miracle”, talked him.

The participation of Niemeyer on the political life of Brazil mades him an compromissed intellectual of his time.

Historical communist - afiliated on the Brazillian Comunist entourage called PCB in 1945, the arquitect had his office in Rio invaded for the militarist on the dictature of 1964. After passed a hardness interrogatory on the policy of the regim he decides to live out of the country.

He meets and knows with Jean-Paul Sartre in Paris, passed six months in Israel, elaborates the University of Constantine on Argel at Africa and in these period, developed the QG of the ONU in New York City at United States of America.

Niemeyer began to have internacional projection and on the 70´s opened his office at the Champs Elysées, in Paris. The arquitect projected the QG of the Mondadori Editorial, in Milan, on Italy. Was in these period that he influential the Mundial arquitecture history. He have a lot of friendship with the painter Cândido Portinari, the master Villa-Lobos, Fidel Castro and Chico Buarque de Holanda.

Working with curves on the creation.

Niemeyer always defend the uses of the monumental in hes arquitectures projects with an obsession for the lightness in contradiction with the concrete. The form was the curve, that subistitutes the milenar tradiction of angles and straights.

“The 90° angle dont attracts me. Neighter the straight, inflexible, hard, created by the man. What´s really attracts me is the curve free and sensual. The curve that i see on the mountains of my country. On the sinuos course of the senses, on the clouds on the sky. On the body of the prefered woman. Of courves that was made the universe”, explained the master.

He gets back to Brazil on the begining of the 80´s, period of the anisty of th exily on the govern of the president João Figueiredo. To consolidate the projects of the friend Darcy Ribeiro, antropolog and vice-governor of Rio on the Brizola period, he projected the CIEPs (Integrate Center for the Public Education) and the Sambódromo of Rio de Janeiro where the most popular show on earth is made the Brazillian Carnival.

The city of Niteroi is the second in Brazil with the most numbers of works from the arquitect, then comes Brasília. Before the consagrated Museu of Contemporanean Arts (MAC), was projected the Niemeyer Path, that is a complex of edifications thas have the masters signature maded for the culture and the religion. The projects was distributed along the edge of the Baía de Guanabara (Guanabara Bay), begining on the town of the city. In these projected constructions is the Popular Theatre, inaugured in 2007.

On the same year, the master of the arquitecture completed 100 years old. The commemoration have the presence of around 600 friends and family. On these day, Niemeyer cited one more time that the life was not easy and that, if he have to resume the life in one word, he choosed to be solidarity: "The poors people stay there only watching the palaces and cant enter there”, he saids. “Th life is not fair and the only thing that justifies these our short ride here is the solidarity”.

Even with a lot of sucess- received all the imaginable awards, including the prestigious Pritzker in 1988 abd the Order of the Cultural Merit - Oscar Niemeyer was a modest man. To the intimates he confessed that he dont understands the reason of all the reverency with him. " I work a lot, made my work project on my clipboard, like a common man...".

These is a small tribute made by Gabriel Alejandro Berman for the Oscar Niemeyer the arquitect of inumerous great projects and the idealizer and the man responsible for contructed Brasilia the Capital of the Brazilliam people that rest in peace and hes works and legacy last for lots of generation to come....