Oscars 2013 Live-Blogging, Plus All the Winners! 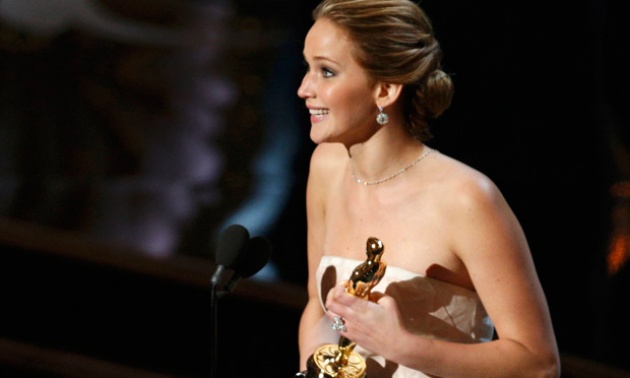 Daniel Radcliffe and Joseph Gordon-Levitt! What a handsome pair!

Okay, this Flying Nun bit is funny but honestly, can we go on with it?

Okay, the Best Supporting Actor Oscar! Will it be Tommy Lee Jones?

Hurry up JAWS is coming!!!!

What a lovely couple -- Jennifer Aniston and Channing Tatum!

Okay, Shirley Bassey was the best thing of the night so far!

INOCENTE wins Best Documentary Short film! Crap, I missed that one! I chose the fantastic MONDAYS AT RACINE

Ooooh, Liam Neeson must be telling himself -- why the heck did I drop out of LINCOLN?

A friend of mine asks, "Did Liam Neeson have a facelift?

Seth MacFarlane is better with one-liners than a full skit, me thinks!

Give it to AMOUR!

Awwww....Michael Haneke is sweet! His sweet must be proud!

Okay, the showtunes part of the show, everyone quiet!!!!!

Bow down to Jennifer Hudson! Hey, where's Eddie Murphy? What about Beyonce?

Okay, naysayers, the LES MISERABLES cast ROCKED IT! I felt like I was watching the Tonys!

Yes, Anne Hathaway wins! Whew! It came true indeed! I loved that I told her she'd win three months ago!

Awwww....what a great speech Anne Hathaway! Fantine would be so proud!

Adele is about to perform SKYFALL, time for my Martini break!

Yay! ARGO wins Best Film Editing...for a while there I thought ZERO DARK THIRTY would take the trophy but whew....

In Memoriam coming up, get your tissues ready!

Awwwww....an homage to Marvin Hamlisch by no other than Barbra Streisand!

The last time Streisand sang at the Academy Awards was in 1977 performing her Oscar-winning song, "Evergreen," from "A Star is Born."

And now, the Original Song!

Norah Jones all made-up to sing the TED Oscar-nominated song!

"This will be the writer's year, man," well said Quentin Tarantino

The top 3 categories coming up!!!!

Let's bow down to the great Meryl Streep!

In any given year, Denzel Washington deserves to win...but, sorry, it's Daniel Day-Lewis' year!

And here comes the big one...BEST PICTURE! And all hail Jack Nicholson!

And in the end, it was the movie with a snubbed director that took the top prize. Ben Affleck's "Argo" rocked the Academy Awards by winning the Best Picture of the year award. The biggest surprise for me was Ang Lee who went home with the Best Director trophy for "Life of Pi" while Steven Spielberg went home empty handed. His "Lincoln" still won two Academy Awards, one for Best Actor for the great Daniel Day-Lewis' fine performance as our beloved 16th President, and the other for production design.

Just as I predicted to the lovely Anne Hathaway three months ago, she went home with the Best Supporting Actress trophy for her brilliant performance as Fantine in "Les Miserables." This sort of is a blessing from the Academy as well for turning in a memorable Catwoman performance in Christopher Nolan's "The Dark Knight Rises."

Jennifer Lawrence won (and fell, sorry JLaw) the Best Actress trophy for "Silver Linings Playbook." Like Hathaway, she is given blessings by the Academy for being consistent with her acting, yes, even as Katniss in "The Hunger Games."

"Zero Dark Thirty" tied (yes, the 6th time in Oscar history) with "Skyfall" for Best Sound Editing. That was the only award the film received. The James Bond flick also won Best Original Song performed and co-written by Adele.

Best Actor In A Leading Role

Best Actress In A Leading Role

Best Actor In A Supporting Role

Best Actress In A Supporting Role

"The Avengers"
"The Hobbit: An Unexpected Journey"
*** "Life Of Pi"
"Prometheus"
"Snow White And The Huntsman"

Ocean's 8: The Movie For Lady Criminals

Finally got to see the Ocean's Eight movie and boy was I mildly entertained. No it's not too great f…