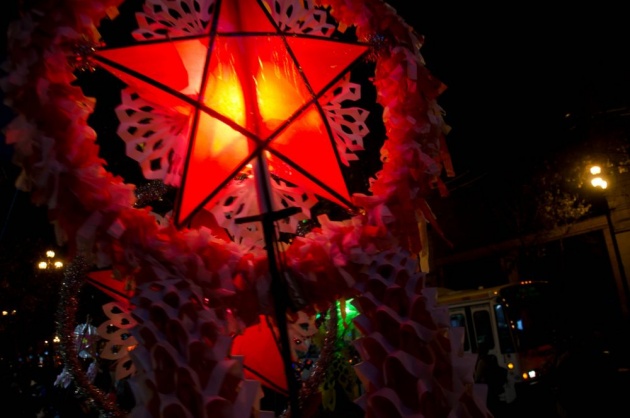 The Parol (from the Spanish word "farol" which means lantern) is a star-shaped lantern made of bamboo.  Parols were used in the 1900s for the saintly procession called "lubenas", a nine-day novena, and to light their way to the church to attend the "Simbang Gabi" or "Night Mass". People then hang it on their houses after. The lantern is designed by Francisco Estanislao and considered equally as important as the Christmas tree for Filipinos. 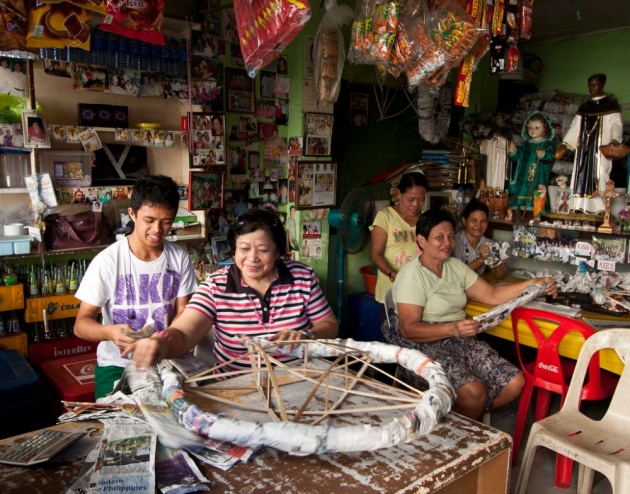 The star symbolizes the star of Bethlehem which guided the Three Kings or Three Wise Men to baby Jesus. It also symbolizes the Filipino Christmas and represents hope, faith, peace, love, good Filipino values and respect for the Christmas holiday. Today, the lantern is commonly hung on windows, balcony, doors, in front the house, streets, offices, schools, etc.

There are two kinds of parol you can see in the Philippines, the traditional and electrically lit parol. 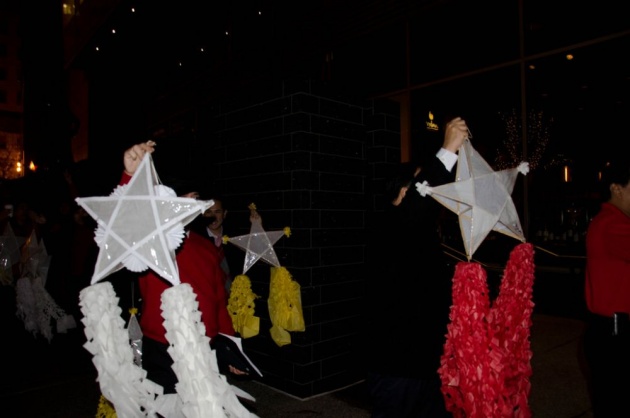 The traditional parol is a five-pointed star with tail made of bamboo sticks and covered with either colored cellophane, crepe paper, metallic foil, or papel de hapon (Japanese paper). There are various designs of the star but the common design is the five-pointed star with tail, and sometimes, with a circle frame around the star. The parol also varies in size, so one can choose which size suits the space he/she is putting it on.

Long before at "barrios" or districts, people put candle or carbide to light the way to the church during the procession because there is still no electricity back then. I am just thankful that candles or carbide in parols are no longer used because it is dangerous for it might cause fire. (Thank goodness for electricity!) The lighted parols today are safer because it already uses electricity. 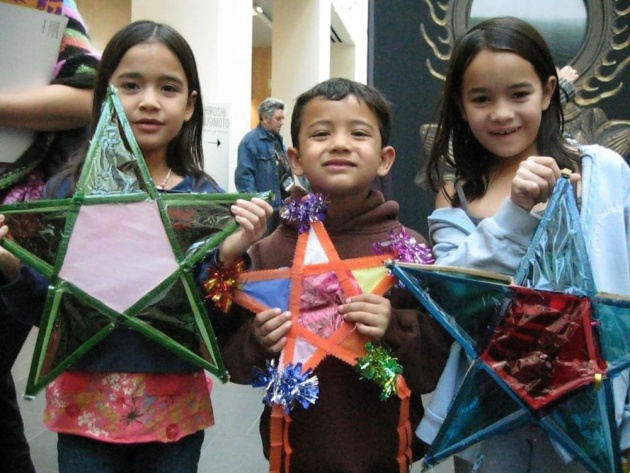 Even though parols are sold everywhere, parol-making projects and contests are still done especially on schools, offices, and communities. The activity highly helps individuals to express their creativity and imagination. It is also a very fun craft project for kids in preparation for Christmas season.

I was able to make two parols when I was in elementary, one in fifth grade and one during sixth grade. I remember, we still searched on the barrios of our town to find someone who sells parol frames. Since the parols sold in markets were already finished products, my mother thought of selling some to my classmates who still doesn't have one. Going back to my parol, I used the basic materials to decorate my very first parol in fifth grade. On sixth grade, I still used the basic materials but added laces, leaves, Christmas balls, and beads. Decorating the parol was a very fun activity for me and makes me more excited for Christmas.

Aside from decorating a parol frame, there are also parols made from recycled materials. This is mostly a school or community project to reuse trash and make something beautiful out of it. I have seen plenty of this at the corridor of my school during elementary and I can't help but admire at the level of creativity put on the project. I envied those students who were assigned to make this kind of parol. They used chocolate drink boxes, plastic cups, chip bags, straws, candy wrappers, water bottles, soda cans, disposable spoon and fork, and more. It was very creative and I was very impressed to see that we could still turn trash into something pleasing to our eyes. 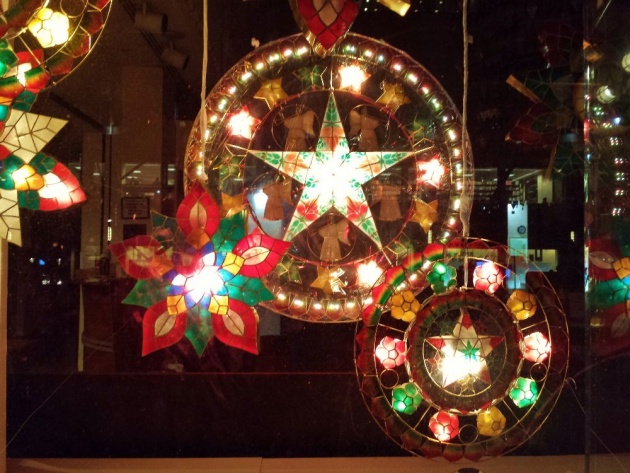 In 1931, electrically lit parols were introduced. Wires replaced bamboos to make the frame and people can now do a more intricate and unique design of the parol. Different materials were then used to decorate the parol like shells, fiber glass, plastic, etc. For the lighting inside the parol, a special kind of LED rope lights called "flexilight" is used which allows to do the light dancing and color changing in a synchronize manner.

The electrically lit parol is also sturdy and can last a long time. We have one here at home which we bought 15 or 16 years ago and it's still working fine. (We only use it on December, anyway.) It is quite expensive, however. Ours was made of shells which cost around Php 1,500 ($28.55 USD). I wonder how these kinds of parols costs now?  Well, we bought ours from a reseller in Dagupan City. It's probably cheaper if you bought it directly in Pampanga, where most of these kinds of parols are made.

PAMPANGA, THE CHRISTMAS CAPITAL OF THE PHILIPPINES 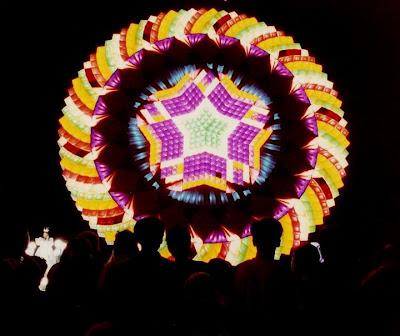 The province of Pampanga is well-known for making beautiful parols, particularly in the city of San Fernando. Francisco Estanislao, a salt vendor, made the first parol in 1908 which was made of bamboo and Japanese paper. In the 1940s, his son Severino David invented the first parol operated by batteries. Severino David's son, Rodolfo David, then invented parols operated by a rotor in 1957. A rotor is a set of huge metal cylinders which sets the lantern to light up in different synchronizations and colors while dancing in tune with its music. The rotors are used for the giant lanterns.

Francisco Estanislao's great grandson, Ernesto David Quiwa, continued the legacy of their family's lantern-making business. Ernesto also taught people in Pampanga how to create the parol in the early 80s. These people also made their parol businesses which spread the lantern business in San Fernando City and caused for the city to be hailed as "The Home of Giant Lanterns". Today, Ernesto is already retired from making parols, but he would sometimes lend a hand. His 5 children were also into parol-making as well.

The Giant Lantern Festival (or "Ligligan Parul" in Kapampangan) is an annual lantern festival held from mid-December until the first week of January in San Fernando City in the province of Pampanga. The gigantic lanterns in the competition measures about 20 feet tall and lighted by around 10,000 multicolor light bulbs. The lanterns were entries from the city's "barangays" or villages and built through the cooperative effort of the village people.

The Giant Lantern Festival originated in Bacolor, then was transferred to San Fernando City in 1904. The festival was simple until lanterns were used for the procession or "lubenas" during the Night Mass. On the last day of the Night Mass, the lanterns are returned to the people. Later on, each village would make one huge parol for their village.

The first Giant Lantern Festival was in 1931, when electricity was introduced in the city. It was also to show gratitude to the Philippine President Manuel Quezon and his family, who at that time, was in Arayat and turned Mount Arayat into a tourist area known as the Mount Arayat National Park. The festival was only cancelled from 1972 to 1975 due to Martial Law.

From 1990, the festival was held at the "Paskuhan Village" (Christmas Village). The venue was then transferred to SM City Pampanga in 2001 and to Robinsons Starmills from mid-2000 until today.

Let me just do a special mention with the "Pampanga Eye", currently the tallest ferris wheel in the Philippines. This ferris wheel by Sky Ranch in SM City Pampanga also transforms into a giant lantern on Christmas. Fireworks are installed on the ferris wheel  and gives a spectacular grand pyro musical show together with the 12,544 LED lights.

THE SYMBOL OF FILIPINO CHRISTMAS 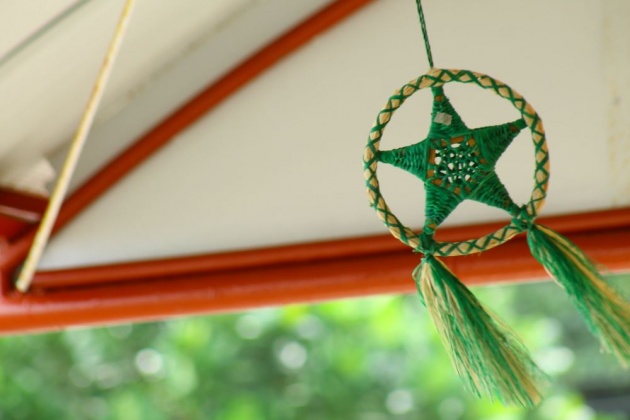 The parol has become a part of every Filipino's culture. It's kaleidoscopic beauty, trance-like dancing lights, and festive vibe shows how creative and innovative Filipinos are. This also greatly speaks how rich our history is and diverse our culture and traditions are, especially when it comes to art. The parol will always be the star shining on every Filipinos' Christmas.