Introduction:  This is Part Two of a two-part interview with Mohammad Sajid Arghandaiwal, a young documentary filmmaker, author and peace activist from Kabul.  In our first interview with Sajid, we learned how this 19-year-old Afghan began his journey with little more than his ideas, a mobile phone, and a strong desire to help the cause of peace in Afghanistan. 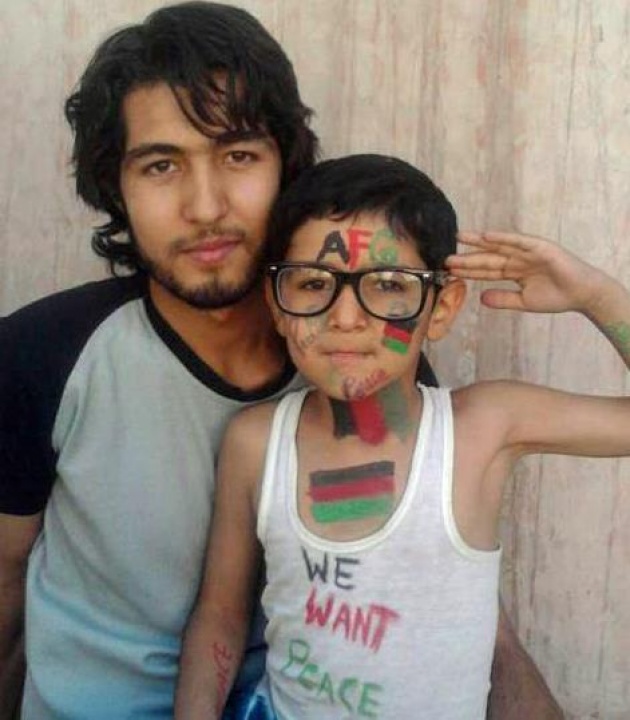 Some people talk about peace and development.  And some people do things to make it happen.  Sajid does both.  His efforts call to mind the famous Afghan Proverb  “Nekee-kun ba daryaa beeandaaz.”

It means “Do good for people, and throw your goodness in the river.”  This proverb is from a Persian fable about a man who did good things for their own sake without expecting any reward, but in the end many good things came to him too.

Film Annex:  It’s great to speak with you again, Sajid.  In our first interview, you talked about your work in Tajikistan with VSO (Voluntary Service Overseas).  Can contact across borders between young people in Central and South Asia help create peace?  If so, how can it be increased?

I am still working in Tajikistan with VSO. I have been here for the past two and a half months, and will be here for two more weeks before I return to Kabul.  My VSO project brings together young volunteers from Afghanistan, the United Kingdom and Tajikistan, all between the ages of 18 and 25.  We are working in teams to help improve ten businesses newly started by Tajik women. For me it has been a great chance to help people, represent Afghanistan, learn new skills, and learn about different cultures. 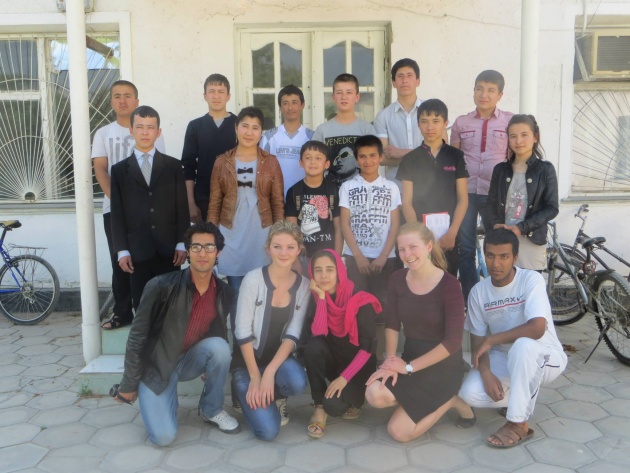 Women’s empowerment in Central and South Asia is very important for the future, and so I am especially happy to be able to help female entrepreneurs in Tajikistan.  I have found and gained a lot of new friends too.  We all want to help spread peace throughout the world.  We are already making plans to work together in the future on different projects to help people and support the cause of peace everywhere.

Cross-cultural contact and communication between countries in Central and South Asia does help peace in Afghanistan.  When young people from different cultures come into contact with each another, they gain a mutual understanding and develop empathy for each other. They see that we are all humans, with the same basic human thoughts and feelings. 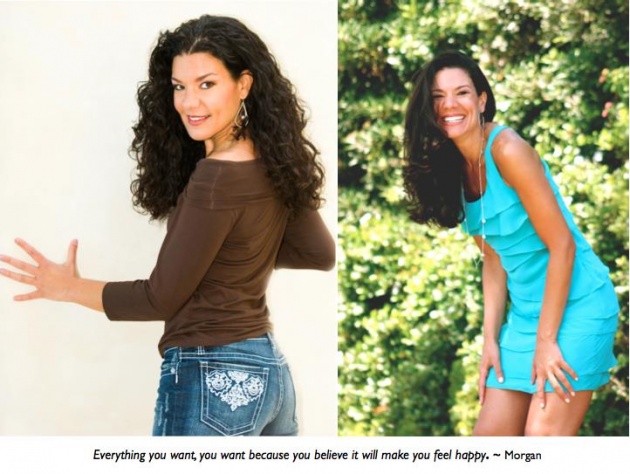 I think this type of experience can be increased by creating cross-cultural forums where young people all over the region can meet to discuss relevant topics and promote peace.  One way to do this is online.  It can be hard and expensive for us to travel, but many of us can travel the world from our homes or classrooms using the Internet and social media, websites and Facebook pages.  Another way to do it is to create traveling programs or conferences where prominent thought leaders discuss topics of peace and understanding, and then provide opportunities for young people to follow up.  National leaders need to be more personally engaged with their own people and societies.  They must engage with young people from across the region to achieve the common goals of peace and development that benefit everyone.

FA:  Many people in Afghanistan do not yet have regular access to computers and the Internet, but the numbers are growing every day.  As you said in your first interview, mobile phones are common, and phone-friendly tools like Twitter and instant messaging can be helpful.  How can film, the Internet and social media education help improve the lives of women and youth in Afghanistan? 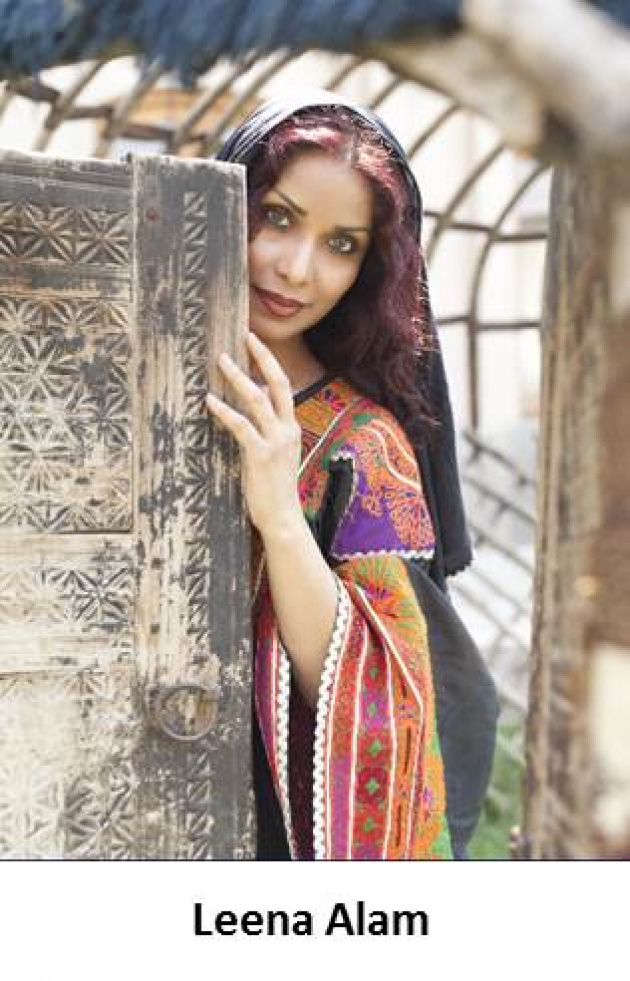 MSA:  Film can play a very important role in the lives of people in Afghanistan.  This is especially true for documentary films, which can help create positive changes in the lives of women and youth in Afghanistan. As the great Afghan movie star, filmmaker and philanthropist Leena Alam said in her recent interview with Film Annex, unfortunately we have lots of illiterate people in Afghanistan who still lack access to the Internet and social media.  So film and television are the only media through which they can learn about different things outside their own daily experiences.

Through social media I have found good friends from around the world, learned new skills, and written an essay for the organization Pax Populi. That particular essay was circulated on the Peace and Collaborative Development Network, with over 30,000 registered members worldwide. Social media also helped me find Afghan Voices, the children’s charity Solace for the Children,  Nancy Dupree’s ACKU, and the VSO project I am now working on in Tajikistan.

Other major online networks like Film Annex’s Women’s Annex have huge followings around the world.  They all are doing great good for the causes of peace, development, women’s empowerment, and other important things. 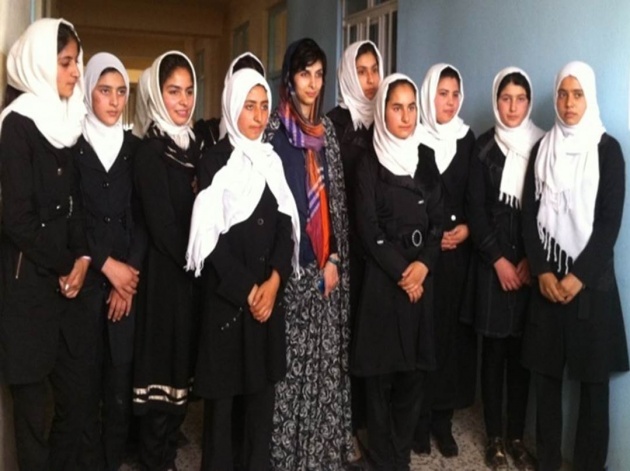 People in Afghanistan need more access to the Internet and social media because it can have such a positive impact on daily life.  The Internet and social media are some of the best tools for youths, and especially Afghan women, to raise their voices.  They can show the world what they want, and raise awareness of violence and discrimination against women.   The whole world is in your hand if you have access to the Internet and have accounts on Facebook, Twitter or any other popular social media.  You can change lots of things through that. Social media makes everyone equal.  A regular person can have the same account or page that even a president can have, and the rules are the same for everyone.

FA:  You are beginning as a documentary filmmaker and have several short films in production right now.  If you were to make a film about an Afghan hero, who are the top three you would consider, and why?

MSA:  There are many heroes in Afghanistan that I want to make films about.  Every person who is struggling to do something for Afghanistan and its people is a hero to me.  If I had to choose three, I would love to make a film about one female hero I have never met, but I have heard and read a lot about her.  There are two other personal heroes whom I know and have worked with.  All three are doing very positive things for Afghanistan, and I admire them greatly.  Here are my top three: 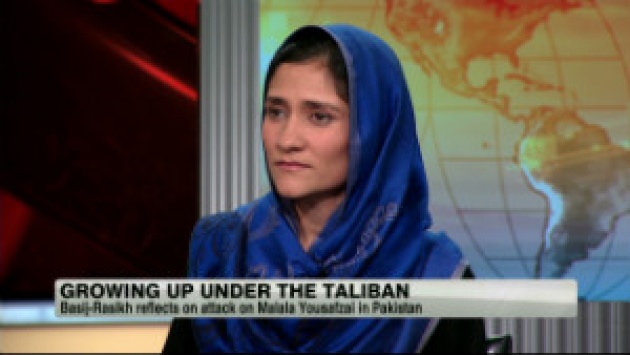 First, Shabana Basij-Rasikh.  I have never met her, but I really respect her and want to meet her and make a film on her if I can.  She is the co-founder of SOLA, the School of Leadership in Afghanistan.  She is only 22 years old, but she is a very creative and benevolent person who is trying to educate women in Afghanistan. That is why she founded the SOLA school.  Many young girls who will be the future leaders of Afghanistan have received scholarships through that school and through the work of Shabana Basij-Rasikh. If she reads this, I want to tell her through this interview that I am really proud of her on behalf of all Afghans.  She gives hope for other women as a young leader who is not just creating followers – she is creating many other leaders like herself. 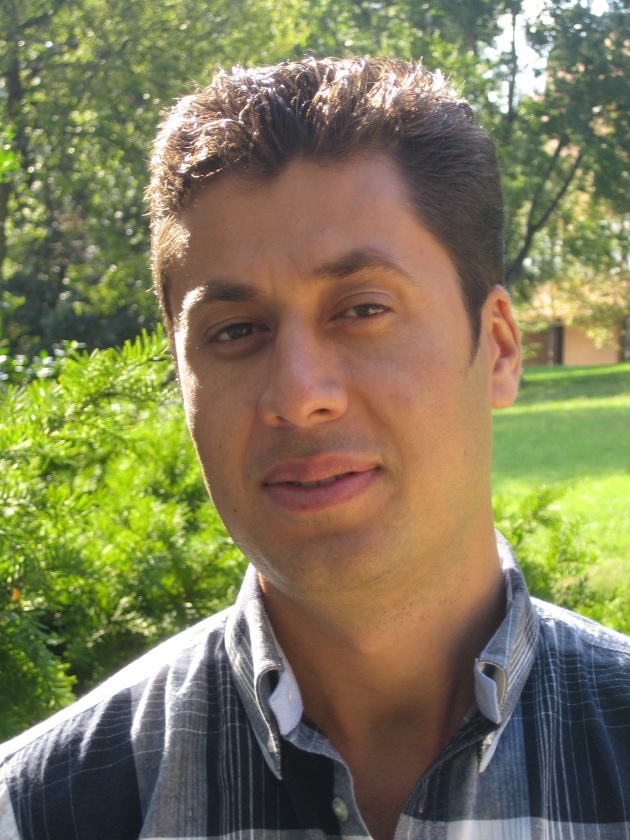 Second, Dr. Najib Sharifi.  He is the director of Afghanistan’s New Generation Organization, which runs several programs like Afghan Voices, through which young Afghans get a chance to receive training in filmmaking.  He also sponsors the Afghan Journalists’ Safety Committee, which is a network of Afghan journalists and peace activists dedicated to ensuring the safety and protection of Afghan media workers and international reporters working in Afghanistan.  He also sponsors Sarak-e-Awal (First Street), a program that helps provide education, meals, and sponsorship to street kids in Kabul.  Dr. Najib believes that the new generation of youth in Afghanistan can work together to bring positive changes. His aim is to help Afghans, especially youth, stand on their own two feet. 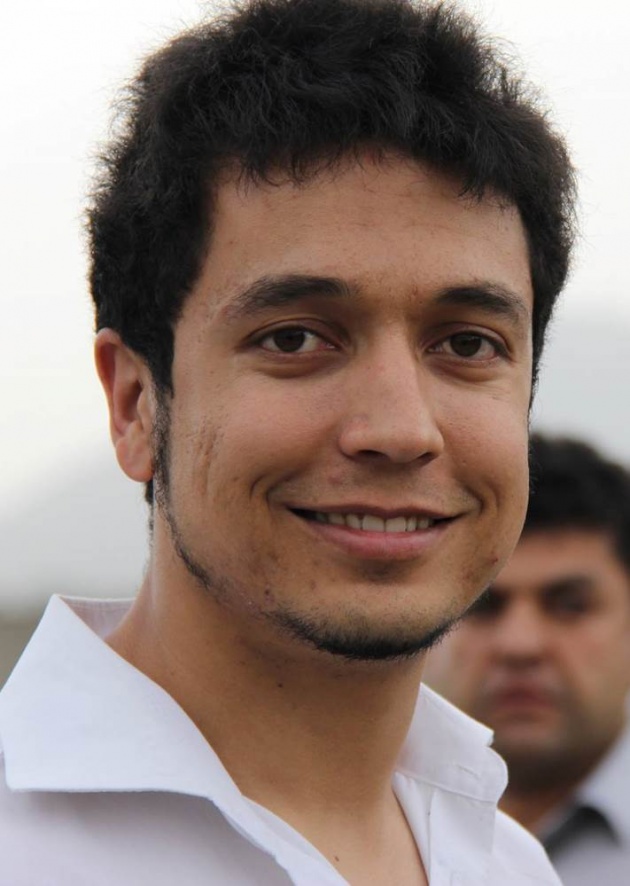 Third, Omar Ehrari is the Country Director of Solace for the Children. His nonprofit organization does great work and is focused on building peace on a foundation of health by providing medical care, education and leadership development for the children of war-torn countries. Solace’s focus right now is on Afghanistan.  Solace for the Children helps Afghans a lot, especially very sick children, and sometimes is even able to send them for necessary specialist treatment overseas. Omar believes in peace, is a peacemaker, and has big hopes and goals of bringing positive changes in Afghanistan. And he doesn’t just talk about it, he makes things happen.  I have worked with Solace for the Children as a volunteer, interviewing family members of sick children and helping them fill out medical questionnaires. When I return back to Afghanistan, I will work as a volunteer coordinator for Solace and take on even more responsibility there. Omar is more than a hero to me, he is like a brother.

These are the three heroes at the top of my list, not in any order.  Someday I will make documentary films about all of them.

FA:   What do you want for your country’s future?

MSA:  I want the same things for my country that every normal Afghan wants.  Peace, Equality, Security and Education. These are the same things that any normal person anywhere in the world would want.

I am a peacemaker in Afghanistan and will always struggle for peace in my country, which is the biggest need now.  More educational opportunities and literacy for Afghan men and women are the keys to development, peace and security.  If the new Afghan generation can get a better education, I believe they will come to understand that the fruit of peace is sweet, and nothing can be better than peace. 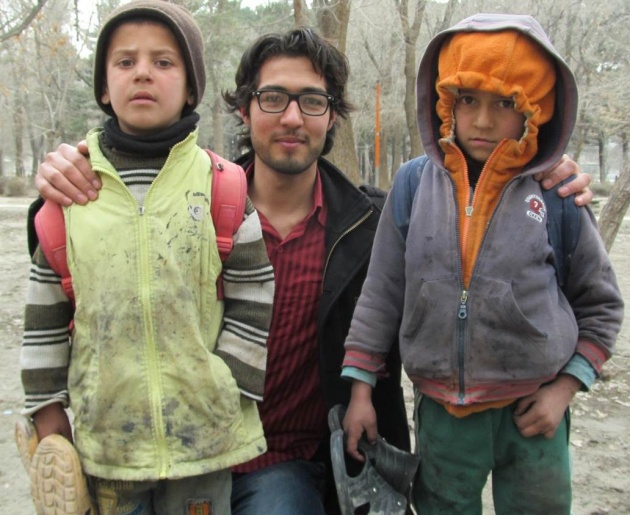 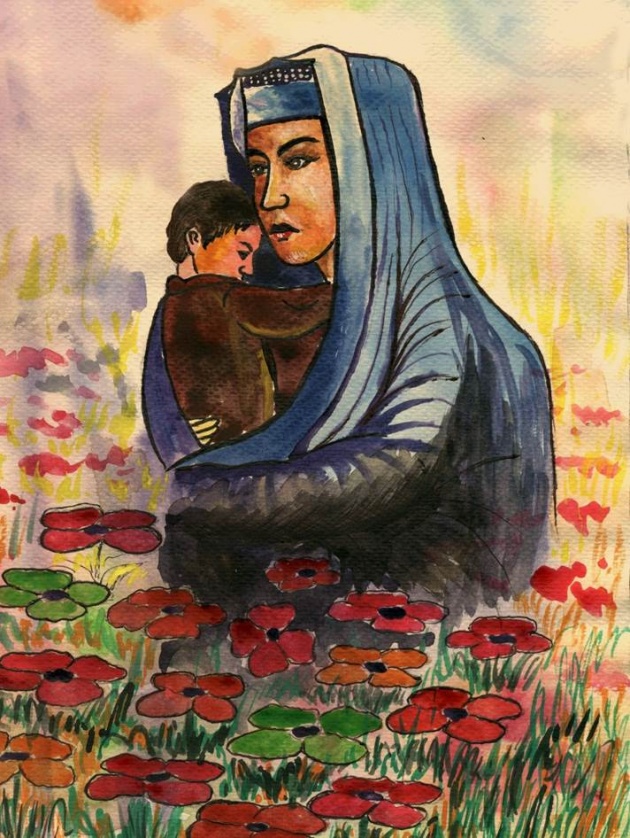 Afghanistan is an Islamic country, but some of our less-educated people do not fully understand Islamic laws and studies.  They use the name of Islam to do lots of wrong things, including violence against women, not allowing women to get an education, and not allowing them to work outside the home.  All these are completely against Islam.  So what I really want to see in addition to peace is equality.  All men and all women should have the right to an education, to work, and to build their communities together with mutual respect and equality.

I am proud to be Afghan, and I think of Afghanistan as my mother. As one of our most famous Afghan Proverbs says, Behesht zer-e paay-e maadaraan ast.  بهشت زیر پای مادران است   This translates into English as “Heaven is under the feet of mothers.”  It means that mothers have a very important role in the world, and in the eyes of God.

I will work for Afghanistan until the end of my life because my country is my mother, and I owe her that.

More Edward Zellem interviews with Afghan celebrities and thought leaders are coming soon on Women's Annex.  To be notified of new posts by Edward Zellem, visit here and click on the green "Subscribe" button.