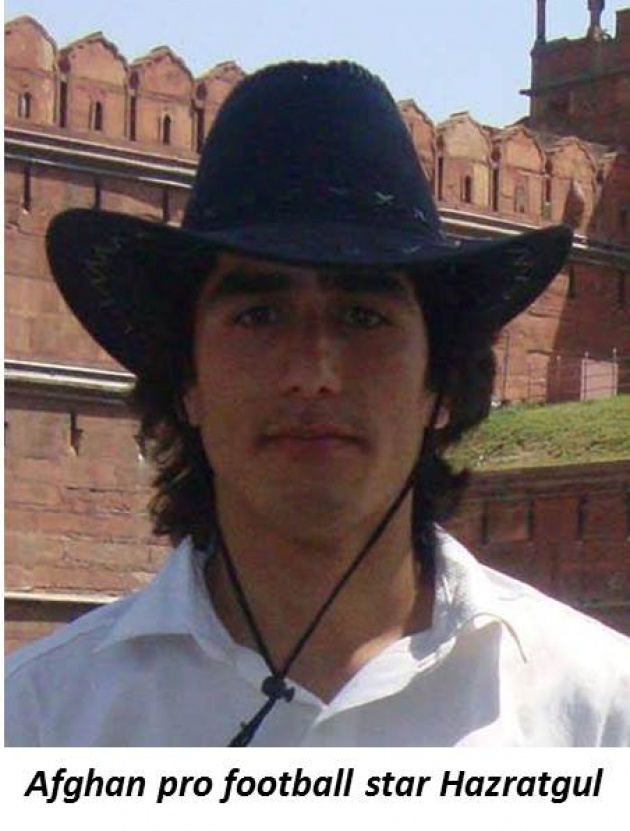 Introduction:  In Part I of our exclusive interview with Afghan pro football * legend Hazratgul Baran, we learned about his fascinating journey from youth football in a small Iranian town to professional stardom on the beaches of Brazil.

Hazratgul is making sports history in both traditional football and beach football (beach soccer).  Beach football is expected to be announced next month as the newest sport for the 2016 Summer Olympic Games in Rio de Janerio, Brazil.

FA:  Hazratgul, we really enjoyed Part I of our interview with you.  We want to know more about your career and thoughts as an Afghan pro football star. 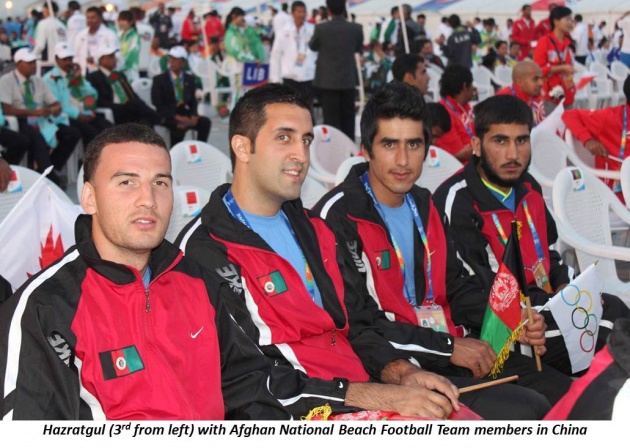 FA:  Why do you think beach football is becoming so popular around the world?

HGB:  I think beach football is gaining popularity and fans because it is new, and because it is a more challenging sport than traditional football.  It requires more skill and is more exciting to watch. 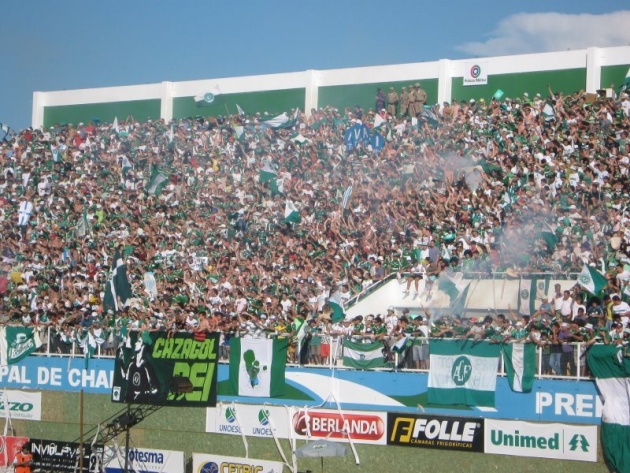 FA:  Traditional football in Afghanistan has a long and proud history going back to the 1920’s.  What inspired the Afghanistan Football Federation to create a national Afghan Beach Football Team?

HGB:  I’m not sure exactly why the Federation decided to do that, but I think it was a great decision. Afghan athletes should be open to the world and participate in as many new challenges as they can, in every type of sport.  This will help Afghan athletes to learn more and to discover more of their talents.  It also shows the world that Afghanistan is developing, open to new things, and becoming competitive in more and more areas.

Afghans are known for being competitive and natural athletes. And Afghans have wills of iron.  If Afghans really want to do something, they will never surrender until they die. This kind of attitude is a great advantage in any sport. 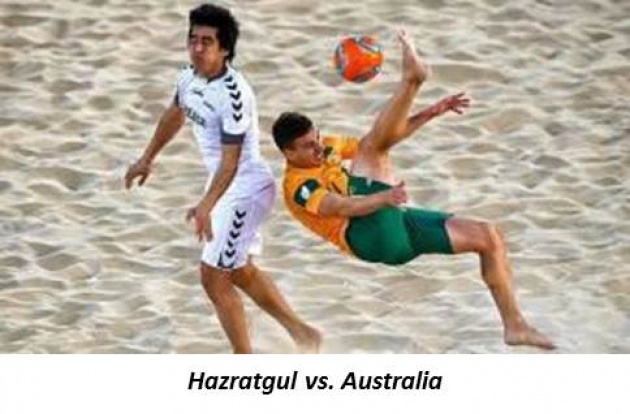 FA:   Was it a difficult decision to move to a Brazilian team?

HGB:   Good question!  I was really surprised when the Brazilian recruiters contacted me after the World Cup qualifiers in Doha.  I really hesitated for a few days before making a decision.  I loved playing on the Afghan national team. And it can be hard for Afghans to live abroad because we miss home.  As one of our Afghan Proverbs in your book says, Harkas-ra watan-ash Kashmir ast.  (Everyone’s homeland is Kashmir to them.)

It means that everybody thinks their home country is the best. 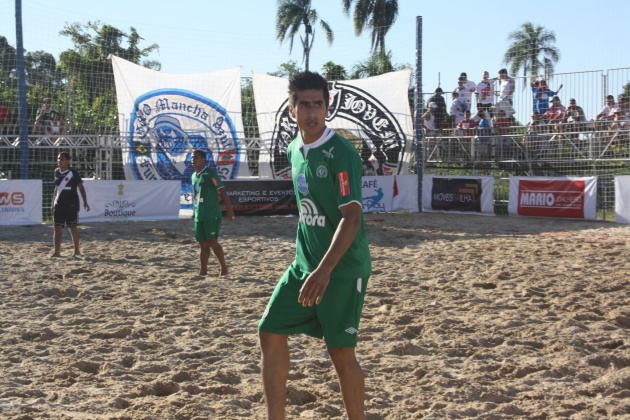 On the other hand, even as a child playing football in the back streets of Iran I dreamed of playing on a professional team in Brazil someday. And now I’ve been lucky enough to do that. It sometimes seems unbelievable to me that it has actually happened.

I am very lucky to get to play against the best football teams in Brazil, and against some of the best players in the world.  And I am honored that Brazilians seem to like my playing style too. 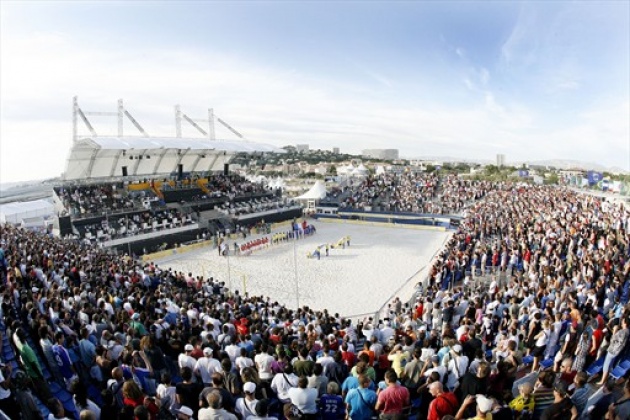 FA:  Beach football is being seriously considered as a new sport for the 2016 Olympics in Rio de Janeiro.  The International Olympic Committee (IOC) is expected to make an announcement next month.  If beach football becomes an Olympic sport, will you play for the Afghan Olympic Beach Football Team in 2016? 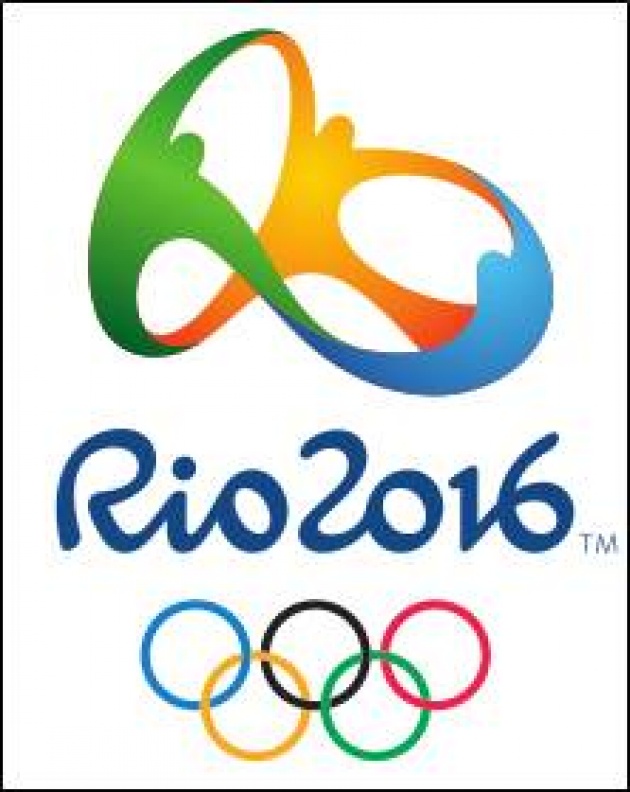 HGB:  It is very exciting that beach football may become an Olympic sport in 2016.  It would be a great honor for me to play on the 2016 Afghan Olympic Team.  I would be proud to devote everything to representing my great country of Afghanistan if I am selected. The Olympics are games of peace and international cooperation, and also inspire national unity. 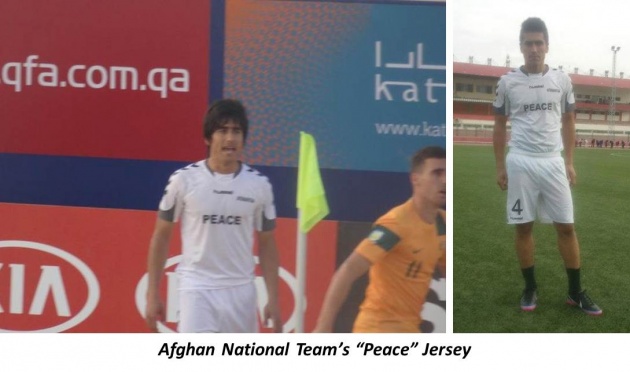 HGB:  That is a really good question. As a football player representing Afghans at the national sports level, it is my duty to be a role model and help promote what is good for Afghanistan.  And above all, what is good for Afghans is peace.  An example of this was at the 2013 Beach Football World Cup matches in Doha.  Our Afghan National Team decided as a group that we wanted to display the word “Peace” in bold letters on our jerseys so everyone could see it.

Yes, we want peace in Afghanistan. We want the entire world to know that.  We hope that the world will continue supporting us in bringing peace to Afghanistan.

Sports are one thing that should be truly international.  The Olympics are an obvious example. Sports should never discriminate by race, religion, gender or national origin, only by ability and skill.  All other prejudice is terrible and always is wrong.

There is a very famous Afghan Proverb about prejudice in your book.  It says Hama-raa ba yak chashm negaah kuneed.  It means that “Everyone should be looked at with the same eye.” 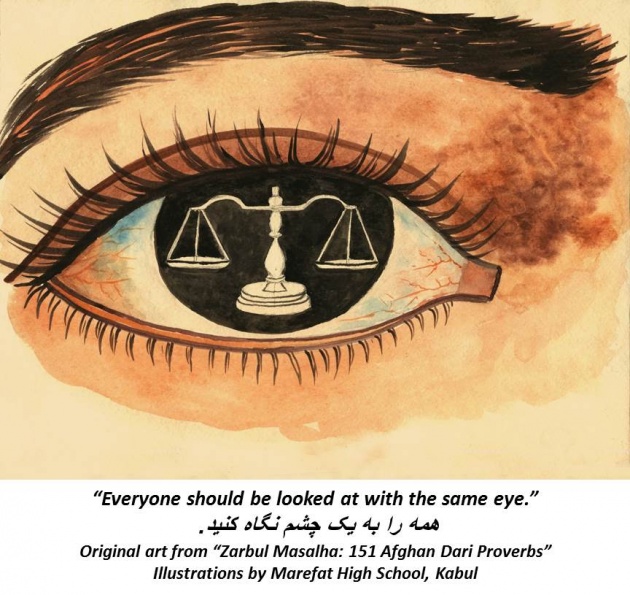 I will never forget how Iranian officials kicked me off the field just because I was an Afghan playing on an Iranian Pro League team, as we talked about in Part I of our interview.  I was only 14 years old at the time, and it hurt.  I hope one day to play against an Iranian team again.  I will look each Iranian player in the eye.  Then I will make them never forget how an Afghan can play football when I defeat them. It won’t be their fault what happened to me in Iran, of course. I still have many Iranian friends and I like the Iranian people.  But as a proud Afghan, I wouldn’t mind showing them the mistake they made that day on the field in Khuzestan. (smiles)

FA:  There are many Proverbs used in every sport.  Coaches in every country often use them to motivate players.  What is your favorite Afghan “Sports Proverb” that you have heard on the football field?

HGB:  The Afghan Proverb that immediately comes to mind for football is Goal nazanee, goal mekhoree. 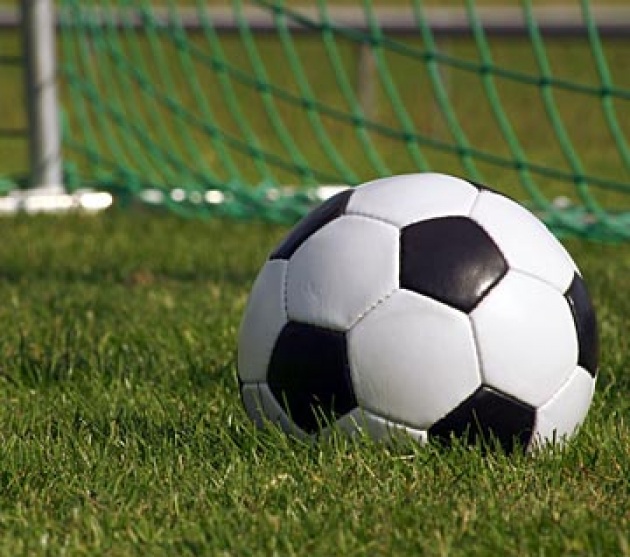 It means “Score a goal, or be scored upon.”

This Proverb warns us that you have to keep the ball, or you cannot score.  If you lose the ball and can’t get it back again, your team will lose.  If you don’t take advantage of chances and opportunities, then you will lose. We always say this Afghan Proverb before each of our matches.

This Proverb applies to Afghanistan too.  Afghans will soon “get the ball” after 34 years of war. We now have to play as a team and make the most of chances and opportunities for peace. Afghanistan cannot afford to lose the ball, or we could lose the match. 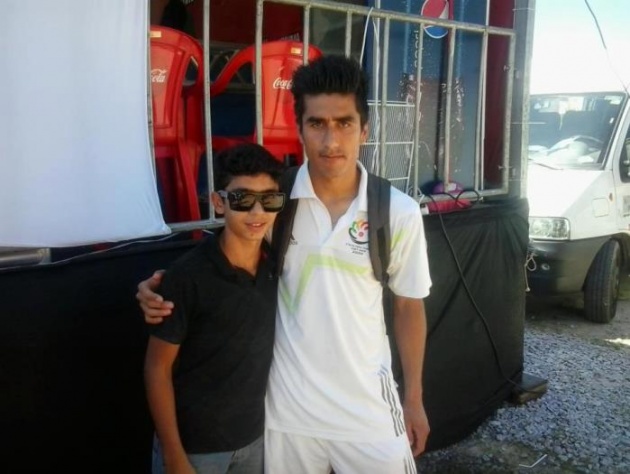 FA:  As a football star, your worldwide fan base is increasing both in Afghanistan and internationally.  What message do you have for your many fans?

HGB:  Afghan fans?  I like it better to call them Afghan friends. Without their support I would be nothing.  I really appreciate them, and they always have supported me in whatever I do.  So that is why I think of them as friends, not fans.  I tell them that maybe one day I will be one of their friends and fans too.

It is a pleasure to hear that more and more of these friends support me on the football field. I am very grateful for that.  I just want to say to all of them again the Afghan Proverb that we say on the field:

My friends, don’t miss the ball that you can score with. 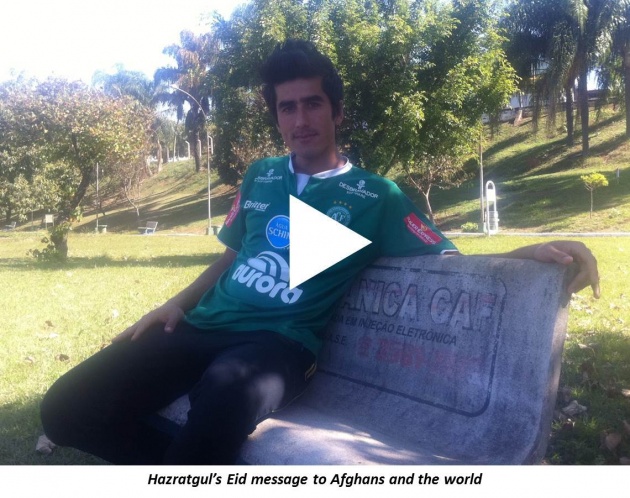 I have one other message for all Afghans as we finish this joyous time of Eid:

I am hopeful that you will spend the days of Eid in happiness wherever you are in the world.  Whatever you do, your first goal should be to think first about the progress of Afghanistan. 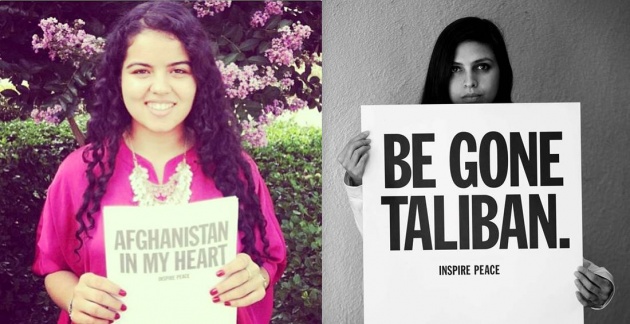 I say to the world that Hazratgul and all good Afghans want peace.  We cannot allow the people that want to damage our country to do that.  This is my message.  We do not want war.  We need to show the world that we Afghans ourselves want peace, and that we are not bad people.

We can be a good and peaceful country like the USA, Australia, the countries of Europe, and many other countries in the world.  We have to work for our country, even if we are outside Afghanistan as I am right now. 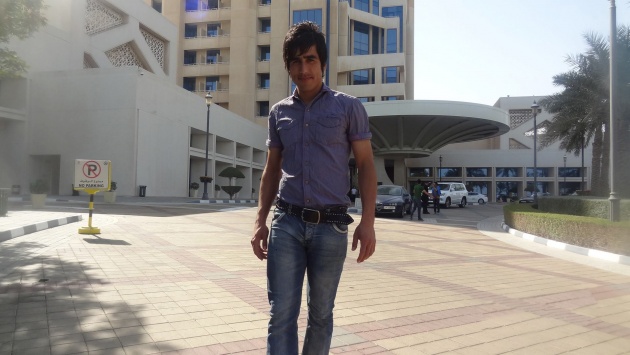 * Note 1:  In North America, Australia, New Zealand, and South Africa, the game is called soccer. Because Film Annex has an international audience, in this interview we will call the game what  Afghans and most of the rest of the world call it: football.  فوتبال 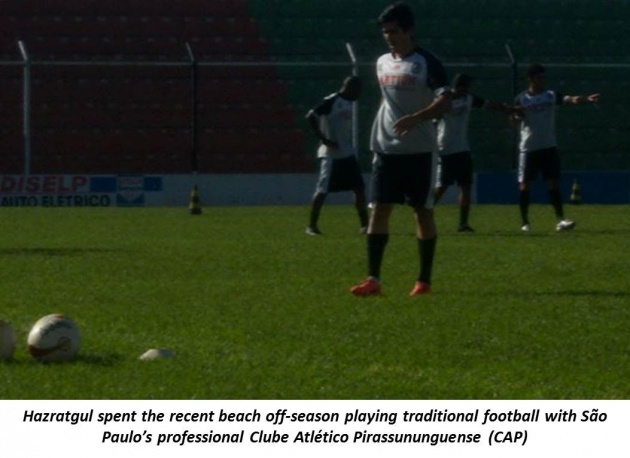