'Red Mondays and Turquoise Twos' films successfully through the blizzard 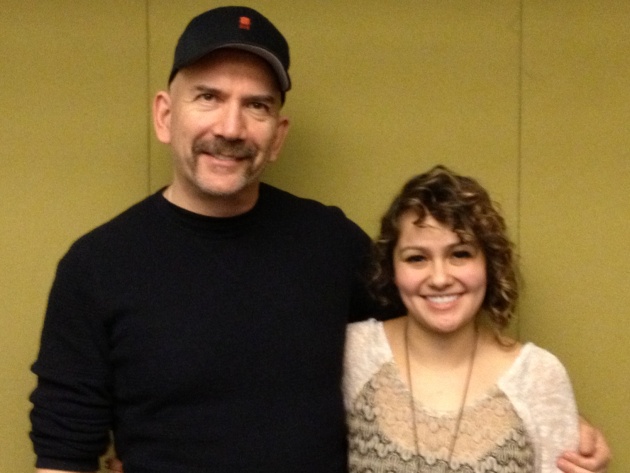 It has been exactly one year since I wrote 'Red Mondays and Turquoise Tuesdays' as a short. We finished filming it this Sunday and boy, what a journey this has been.

We don't write down our aspirations often enough. I'm talking about those vision boards from 'The Secret'. The ones where they say 'I wanted to buy this house by the beach and I put up a picture of it on my fridge, then I tossed into my cupboard. Imagine my surprise when I dug it up years later and realized I'm living in one of those houses now!'.

Okay, this isn't that bad but I'm always amazed whenever something that was a vague idea in your head takes shape as reality.

RMTT was written in February 2012, and a project plan was made for it by May that year. We auditioned actors in July and August. I have realized that learning to 'let go' is a huge factor in film-making. The script was originally written with Indian actors in mind. But soon I realized that there aren't that many Indian actors over 50, who can give you the kind of performance you're looking for. That said, there was something about this project that has consistently drawn talented people towards it.

To brief readers, here's the synopsis of 'Red Mondays and Turquoise Tuesdays' :

RMTT is the story of Ralph Steiner, a 50-year-old mathematician with low self esteem, digging away at his paper for his original idea, in the hope of redeeming his rather uneventful life. His daughter Lara, is a sprightly young classical violinist who views life as a never-ending adventure. What they don’t know about each other is that they share a rare neurological condition called synesthesia – A dreamscape where one associates colors with sounds, smells, tastes and shapes. ‘Red Mondays and Turquoise twos’ is a visual exploration of this father-daughter relationship.

Eventually, we found Jack Merrill for the role of Ram, so Ram had to become Ralph. Now I had to work backwards. I was still trying hard to keep some sort of Indian element in it, so I was looking out for actresses who could pass off as Indian! That didn't quite work either, but we found a brilliant actress in Felicia Masias, So Kavya became Lara. I'm a firm believer in the fact that with all other things being equal, actors can make or break a film, so the script had to be tweaked a bit to suit the actors.

I reached NYC ten days before the shoot (I'm based in Phoenix) and had the craziest pre-production schedule ever. But better to have a crazy pre-production than a crazy shoot! A lot of the below the line crew came on board fairly close to the shoot date.

Just when you think all variables have been given their constant values (This is a math movie, for crying out loud!), the weather decided to add to the drama. Blizzard alert on the day of the shoot. Some of the cast and crew were taking the train to central Jersey (where we were filming) and nothing was certain until everyone showed up that Friday morning. But they all did and once they did, it was smooth sailing.

There were roughly 75 shots to be shot over 3 days, but with having to shovel snow in an exterior scene, we barely managed to capture everything we needed. But this is the most focused cast and crew I've worked with and once everyone had settled into their zone, there was no looking back.

This wouldn't have been possible without all our Indiegogo supporters and other investors! Huge thanks to all of you!

If you haven't 'liked' the film's Facebook page yet, you can do so at :

Mrinalini is a musician and a filmmaker with a penchant for stories where characters have conditions that set them apart from the ordinary. With a diploma in screenwriting from the New York Film Academy, Mrinalini’s debut film ‘Notes of Silence’ premiered at the Los Angeles Women’s International Film Festival in…