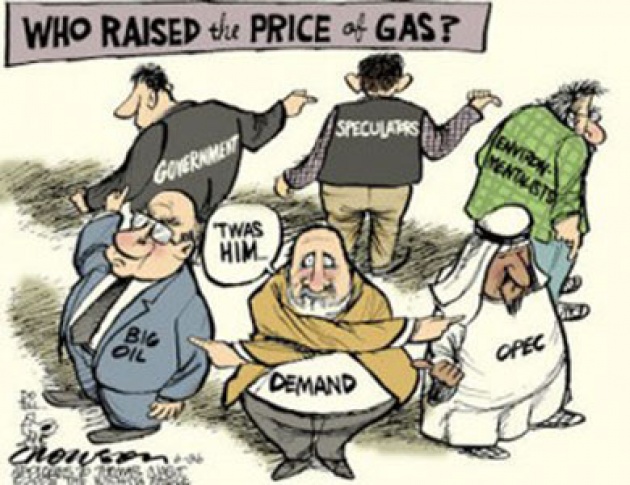 President Obama’s Administration will bring together advisers and regulators to address ever more brazen as well as damaging petroleum price speculation/manipulation that impacts everything from consumer confidence and economic prospects to food and manufacturing production. Petroleum and gasoline prices appear disconnected from supply and demand fundamentals. Political risk appears to only drive prices in one direction – up. (Cooling down of Iran tensions and reduction of conflict risks has not resulted in lower prices while only a few weeks earlier such was the presented cause for spikes in prices – See our Blog for Film Addressing Reduction of Potential Conflict with Iran). Factor apparently most impacting is price action in commodity/financial markets where oil and refined products trade as financial instruments and have become an “investment vehicle.” Even OPEC no longer appears to be the determining factor.

Whether overt manipulation plays a role is not proven. However, “investors” in petroleum and refined have largely driven prices in one direction. This occurred also in the pre-2008 peak of almost $150 per barrel oil. “Investors” kept piling on, until they broke the camel’s back so to speak. Prices then tumbled by 70% or more. (I’m of the view that as much as the real estate bubble, the spike in commodities and “real assets” caused the 2008 financial crisis as speculation finally killed the goose laying the golden eggs. There is no supply/demand or market rationale for current prices and is a major threat to global and US economic health). See Blog for Film: "Behind Oil Price Rise: Peak oil or Wall Street Speculation" by William Engdahal

The Obama Administration  is focusing on beefing up resources for supervision/regulation of energy futures markets and on significantly increasing penalties to extent that violations occur. It is also seeking to up margin requirements that would presumably also increase the exposure of speculators and reduce their ability to constantly leverage up their “bets” and thus push markets in only one direction.

Obama realizes that both his Presidency as well as overall US and consumer economic health are at risk. Those who argue for more drilling in US miss the point that the market is already well supplied and that US demand is actually down – US refineries have been closing while only a few years earlier there was a perceived need for more. The fundamental problem is that the free markets are neither free any longer nor respond to market and political risk fundamentals. Read our Blog for Video – “Myth of Drill, Drill ,Drill”

Hello Bitlanders! So today I would like to share to you the difference between using AutoCAD and han…

Hello Bitlanders!! Today I would like to share to you; How to use Photoshop Actions. Im not saying I…

The Start of the First Oil Shock

On October 17th 1973, OPEC, the Organisation of Petroleum Exporting Countries, agreed to use the pri…

Racism; Since the Election of Barack Obama

Americans pretty much expected Hilary Clinton to be the Democratic candidate in 2008. Barack Obama c…