REVIEW: EXORCIST III: LEGION: Discover One of The Finest Horror Movies Ever Made

Totally ignoring the sequel Exorcist II: The Heretic, William Peter Blatty (the writer of the original novel) wrote and directed Exorcist III: Legion (1990), in an attempt to bring back his original vision of the characters and themes to the screen, after the soft, metaphysical horror of Exorcist II.

Picking up 15 years after The Exorcist, the film centers on Lt. Kinderman (the detective involved in Regan McNeil’s case in the original) and his quest to catch the seemingly immortal Gemini Killer, a sadistic serial killer with a taste for satanic imagery. But early into the investigation Kinderman loses one of his dearest friends to the killer, and discovers a truth that shatters his sense of reality and plunges him into a world of evil, demons, and unanswerable questions.

It is obvious from the get-go that writer/director Blatty is out to make something different. From his perfectionist, stylish, classy direction, to the humor-tinged dialogue, to the oppressive yet hypnotic mood, Exorcist III is a work of a filmmaker in total control of his craft.

The film contains several terrifying sequences, realized with awe-inspiring precision, and the performances throughout, especially George C. Scott’s as Kinderman, are impressive.

Sadly, the producers were displeased with Blatty’s director’s cut,  and imposed a series of cuts and story changes (including a gratuitous exorcism scene) before the film’s release, thus diluting Blatty’s original vision to a considerable degree, leading to a flawed third act and an uneven pace.

But even with its imperfections, Exorcist III is one of the finest, classiest horror films ever made, and the work of a master storyteller out to scare and provoke you. Unmissable. 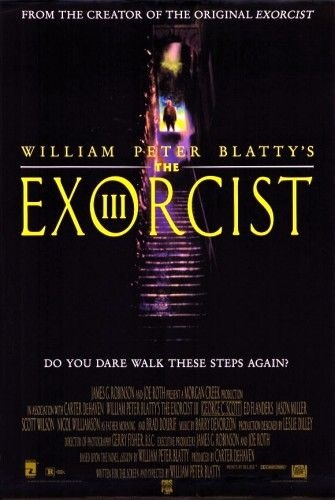