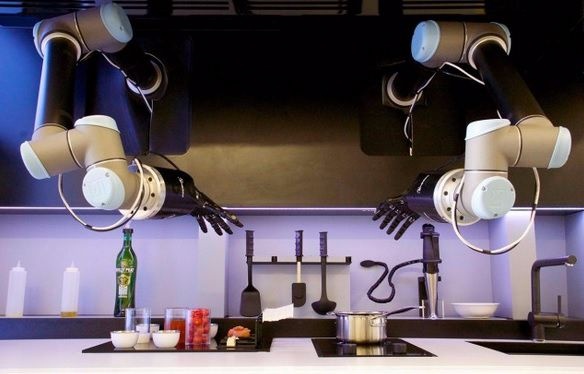 After a long, drawn out day in the office, it’s not always easy to motivate yourself to cook a proper meal when you get home. Instead of reaching for the saucepan, many opt for the quicker and easier option of take-out or ready meals, many of which are not exactly healthy or particularly nutritious. But what if you could have a handy robotic assistant in the kitchen, ready to whip you up a gourmet meal whenever you so desire? That’s the dream of Moley Robotics, a London-based company that has developed a prototype “robochef” designed for the home.

Unveiled today at Germany’s Hannover Messe technology fair, the machine consists of two remarkably dexterous robotic arms installed atop a cooking area, complete with hobs, a sink and an oven. The robot’s sophisticated and fully articulated hands were created by Shadow Robot Company, another London-based firm, whose products are used all over the world, including by NASA.

Rather than cooking like a machine, the system works by first recording human actions in 3D and then converting these into highly precise movements. The prototype was trained by chef Tim Anderson, who spent time whipping up original dishes in a motion-capture studio. During a demonstration, Anderson had the robot make a crab bisque, but he told BBC News it can do anything from a bit of prep to completing an entire dish.

According to Moley’s website, the firm hopes to bring a consumer version to market by 2017 that will feature several additions, including a library of thousands of recipes, a dishwasher and a refrigerator. This means you not only won’t have to cook or prep for yourself if you can’t be bothered, but you don’t even need to wash up afterward. Marvelous. You will even be able to control it remotely using an app, which means you could order your dish to be ready for when you get home.

Eventually, Moley hopes to produce a version complete with cameras so that users can teach it to create their own dishes, which can then be uploaded to a digital recipe library and shared with other people. They also want later models to be capable of dealing with tricky things like stopping mixing at the appropriate time to prevent splitting or over-beating.

“Something would change; we would see it in the sensor data. Maybe something gets stiffer or softer,” Shadow’s Rich Walker explains to BBC News. “We should be able to sense that and use it as the point to transition to the next stage of the cooking process.”

Of course, such sophisticated technology won’t come cheap, and will set you back close to $15,000 (£10,000), but hopefully the price will go down over time as with any new technology.