Streak: Important diagnostic physical property of coloured minerals
Streak is a thin mark of finely powdered colour
By scratching or rubbing a mineral over a rough unglazed plate – Streak Plate
Example: Chromite and magnetite resemble closely in their other physical properties but they produce:
Chromite – brown streak; Magnetite – black streak

Cleavage: Defined as:
Tendency of a crystallised mineral to break along definite directions .
In other words, cleavage = planes of easiest fractures
These are directions or planes of least cohesion in the atomic arrangement of that mineral
Cubic cleavage, rhombohedral cleavage, octahedral cleavage, prismatic cleavage, etc
Example: Calcite (a crystalline mineral of natural calcium carbonate), Mica (a group of Al Sil. minerals)
)

parting: Defined as:
Property of a mineral to split along some secondary planes
It happens due to the presence of secondary twin planes and gliding planes
Due to presence of substance having different composition or certain stresses
Example: Corundum
Fracture: Defined as:
Appearance of broken surfaces other than cleavage
Common types of Fractures:
Even Fracture: When the broken surface is smooth and flat e.g. chert (a variety of silica minerals that contains microcrystalline quartz) 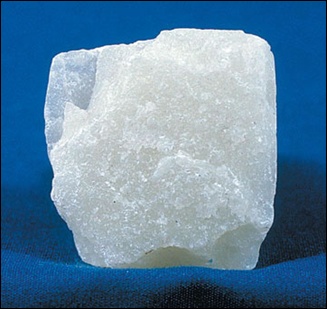 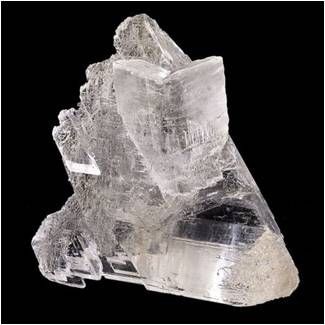 Fibrous: When a mineral appears like as it is composed of fibres e.g. Asbestos

Radiating: When a mineral is made up of needle-like
formation as appear originating from a common
point or centre .g. Wavellite (an Al phosphate
mineral)

Bladed: When a mineral appears as
composed of thin, flat, blade-like parts e.g.
Stibnite (a mineral of antimony sulfide)

Lamellar: When a mineral appears as
composed of leaf-like sheets e.g. Muscovite
(mineral of white mica – a K Al Sil. mineral)
Foliated: Similar to lamellar but in this case
the individual sheets can be easily separated
from each other e.g. Slate – a foliated
metamorphic rock derived from mud-stone)
Granular: When a mineral consists of grain-like crystals e.g. magnetite, bornite, etc
Globular: When a mineral’s surface appears like
the rounded, overlapping bulb-like or globe-like
projections e.g. hematite (an ore of iron)
Equant or Equi-dimensional: When the
crystals are equi-dimensional whether
perfectly or less perfectly e.g. Olivine (Sil. of Mg
and Fe)
Prismatic: Appearing like prism e.g. Tourmaline

Nodular: A mineral of rough spherical formation
e.g. chalcedony (a mineral of SiO2)

Oolitic: Appearing like small spheres or round
grains e.g. hematite 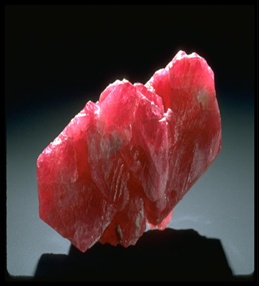 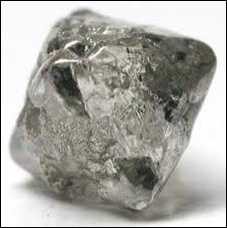 Specific Gravity:
Density: It is a fundamental property – mass per unit volume
For minerals, density is expressed in g/cc
Non-metallic minerals have low Density = 2.5 to 4.5 g/cc
Metallic minerals have high Density as high as 22.59 g/cc (that is, of osmium)
In mineralogy, Specific Gravity is used more than Density
Specific Gravity (Sp.G or S.G): A ratio of the density of a substance to that of water at 4o C. As it is ratio, so it has no unit
Specific Gravity is also termed as Relative Density
Specific Gravity of a mineral depends upon:
(i) Composition: Non-metallic minerals have low S.G
(ii) Atomic Structure especially Atomic Radius: Atomic radius is inversely proportional to S.G.
Hardness: A fairly constant and diagnostic property of a mineral
Hardness is defined as: Resistance which a mineral offers to an external disfiguring action e.g. scratching, rubbing, abrasion or indentation
A German mineralogist Friedrich Moh devised a scale known as Mohs Scale of Mineral Hardness in 1812.
Mohs Scale of Mineral Hardness is based on: ability of one material’s sample to scratch another one, by gently scratching each other – usually the softer mineral gives its streak on the other’s surface which is too harder or even harder
Harder minerals were discovered first, softer after that – by finding out that the softer mineral had been scratched

Hardness of some common materials according to Mohs Scale:

Crystallized: When a mineral exhibits well-defined crystals as represented by the crystals and crystal faces – it indicates the Perfect Atomic Arrangement in that mineral
Crystalline: When the well-defined crystals and crystal arrangement are absent but the mineral shows a tendency towards crystallisation as appeared by the development of small grains in that mineral
Amorphous: When both the above-mentioned properties in a mineral are absent – when there is neither a crystal face nor any cleavage is seen. It is due to unordered or indefinite atomic arrangement in that mineral.

A mineral is said to be Optically Positive if the velocity of the Ordinary Ray is greater than that of Extraordinary Ray. And vice-versa is for Optically Negative
Polarising Microscope: It is also called Petrological Microscope and differs from an ordinary microscope. In Petrological Microscope, there are two prisms provided – known as Nicols (they act as Polarising Filters – they eliminate all the O-Rays by ‘Total Internal Reflection’). First Nicol is called Analyzer (fitted in the tube of microscope, above the Objectives) and second is called Polarizer (fitted between the Stage and Mirror of microscope).

Simple Ways to Minimize The Use of Plastics

Video credits:Douglas McCauleyviaYouTube I have a confession to make. Every day, I have been guilty …

(Photo credit via wwe.com) In professional sports of wrestling, WWE is rank firstamong all wrestling…

Image created by me Shaiera Hi there people! Today I want to share with you some of the paying socia…