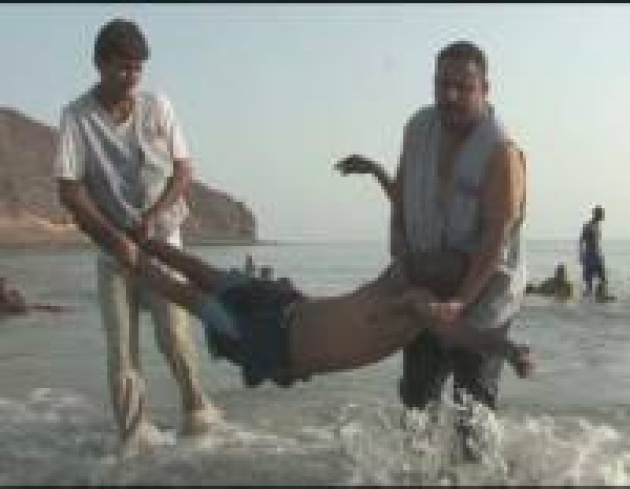 It must be really depressing to see people landing up on the shore half famished or almost on the verge of death.

This is what happens on the shores of Yemen in the month of August / September. This is due to the instability of southern Yemen.

People try to flee in the best (or worst) possible mode of transport not knowing where or how they are going to land at the other end.

The smugglers who take them in small boats are ruthless, often beating the passengers and overloading the boat and undergoing the risk of capsizing.

As soon as they get word they land up at the beach to give immediate food a water relief. Some of the victims are too traumatized to move.

After a short rest at the shore they are taken to the nearest transit center where they can rest for for a few hours so that they can have a meal before taking them to the reception center in Awhwar or Mayf’aa.

There are risks involved like endangering their own lives to save others, pulling people out of the waves in difficult seas and operating in extremely volatile security conditions where tribal violence is a daily occurrence.

In some cases where there are causalities, they even busy the dead.

Al-Hamairy founded SHS in 1995 when he found that the new arrivals became a burden to the impoverished local community. He says that he was motivated by the NGO to assist both the groups.

In naming SHS as the 2011 Nansen Refugee Award winner, the UN Refugee agency recognizes the life- saving assistance provided to the tens of thousands of refugees and migrants who arrive on Yemen’s shores each year.

10 Tips On How To Save Money

Here is a video on A Simple Trick on How to Save Up A Lot of Money Fast Video Credit: Bright Side v…

Easy Ways to Make the Most of Our Income

Women empowerment: The Need of the Time

Image Source: Google Edited by Moon Khan As word Empowerment means to give warrant power and when we…