I've been in an unusual place of recent. Not a desperate situation of potentially fatal or traumatising consequences, rather that of uncertainty and fresh perspective. All film projects seem to be progressing slowly with difficulty to find time (and in some cases enthusiasm) to spark each one to the next stage. The blank page I started with at the beginning of the year, is filled with ambition and disillusionment in equal measure. That wasn't the plan, but that's life I guess.

On a far more positive note; I have been getting more physical exercise and have been dedicating large shares of my time studying screen writing. Analysing films with strong narrative as well as reading and listening to books from Robert McKee, Syd Field and Blake Snyder. Partially due to this, I have a slightly different perspective on the way I might have initially told the stories I'm developing. It may well be the reason I'm taking a step back and could also be the best thing for me.

For anyone interested in screenwriting, I plan to write a few blogs on the subject, sharing some useful nuggets from some of the most renowned lecturers on the subject. It's really eye opening stuff. I hope you get a lot out of them :)

You might have heard someone displaying a vague knowledge that stories have a beginning, middle and an end. I suppose it's correct to a degree; after all, a film starts at the beginning, half way through it's the middle and at the end you sweep the popcorn from your lap and make for the exit.

Structurally speaking, most films you see at your multiplex have a three act structure: The first act establishes the situation and introduces all the important stuff like characters, setting and so forth. The second act is where things go wrong and theres a challenge that needs overcoming. The third act fittingly resolves the challenge with all ends tied.

What they are, are the two largest components to story. The story itself and its acts. Here's all of the components contained in a film from the smallest to largest: 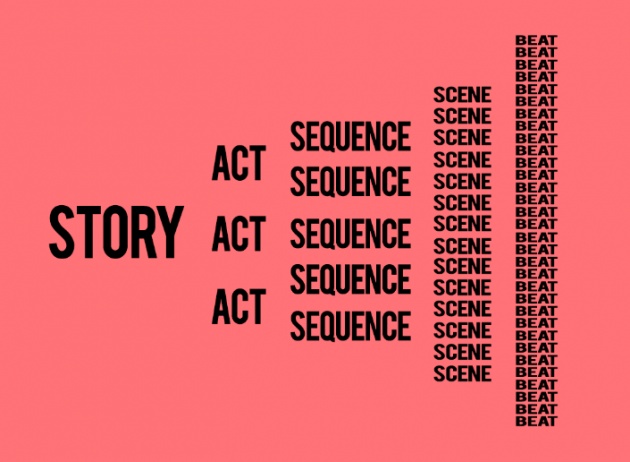 This is very loose. It's really just a visual aid I made up.

Beat: The small changes of emotion within a scene. An argument in a film for example might consist of a verbal tennis match of beats. Ted might threaten Fleming, in return Fleming might threaten Ted back with a lie. Ted might call Fleming's bluff and so forth. A tight script with beats that enrich character and thicken the plot, are likely to make for an enthralling story.

Scene: The beats combine to make a scene. In a scene, one value tends to shift to another (loyalty to betrayal) and from positive to negative or vice versa. If it doesn't, nothing's happened.

Sequence: A sequence is a series of scenes that combine to take one primary value to its resolution. A great example of this is in Robert McKee's book 'Story'. He details a sequence about a lady going for an important job interview that has three scenes. The first scene she's getting ready, the second scene she makes her way to the interview, the third scene; she arrives, impresses and gets the job. Sequences also have the positive and negative shift within them as there are in scenes. In this case, she has gone from unemployed to hired, a negative to positive shift.

Act: Significant shifts in the story divide it into acts. In the case of the story above, the moment that might trigger the second act, might be the moment when she is offered the job interview. In the second act she gets the job, but is then betrayed and loses her job, forcing her to start from scratch with a rival company. The third act, she quickly rises to the top with inside knowledge of her old company and bring them to their knees. Films are usually in three acts, but it's not always the case.

Story: The controlling idea which shifts the audience from one value to another and is the writers primary focus. In Spielberg's 'Jaws', we're principally taken from danger to safety and are drawn to that experience as audience.

Thanks for the continued support