The Brobdingnagian king and his people think practically not theoretically, concretely, not metaphysically, simply, not intricately. Brobdingnag is Swift's utopia of common good sense and morality, while Gulliver influenced by the corrupt society from which he comes, appears to be blind to moral values. Gulliver's account of the history of England in the 17th century draws the
following crushing retort from the king: 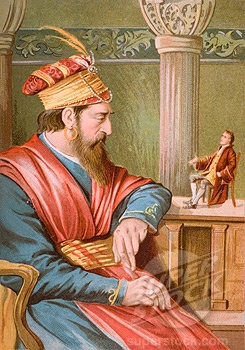 When Gulliver offers to the king of complete control over his subjects by teaching him to manufacture gunpowder, the king is horrified. Thereupon Gulliver, speaking as a European, feels surprise and contempt and explains the king’s rejection as a:

"He gave it for his opinion that whoever could make two ears of corn or two blades of grass grow upon a spot of ground where only one grew before, would deserve better of mankind, and so more essential service to his country than the whole race of politicians put together"

The learning of the Brobdingnagians is simple and practical "consisting only in morality, history, poetry and mathematics." It is noteworthy that Swift omits metaphysics, theoretical science and theology from the category of useful knowledge.

Swift wants us to understand the answer by making us share Gulliver's disgust at the cancerous breasts and bodies of the beggars, and at the color, the huge pores, the coarse hairs and the nauseating odors of the maids of honor--such is the skin, perhaps, that the Brobdingnagians love to touch.

To sum up the discussion, we can say that “The Voyage to Brobdingnag” serves the4 two-fold purpose of Swift: entertainment and satire. Entertainment in the Second Voyage is in skilful exposition of disproportion b/w Gulliver and Brobdingnagians. Regarding satire, it contains the most crushing attack on human follies. But it should be kept in mind that Swift’s satire is
reformative in nature.