Last week, Roya Mahboob was in Dubai celebrating the Persian New Year. At the same time, I was travelling to D.C. with Fereshteh Forough, Film Annex's liaison to Central and South Asia, and Semyon Maltzev and Alexey Levchenko, Film Annex's filmmakers and editors, to attend the annual dinner of The American University of Afghanistan. The next day, we interviewed Maura O'Neil about her work as Innovation Chief Officer at USAID,

and Priya Jaisinghani about her work as Head of Mobile Solutions at USAID:

The two days in D.C., in particular the meetings at USAID, inspired me to further develop the concept of Target Thinking.

Friday, Roya called me to let me know that she was asked to cut her vacation short and come back to Kabul for an important meeting and presentation to be held Tuesday of this week. On Monday, she was advised it was a meeting with John Kerry, US Secretary of State. When I heard that, I thought: "Kerry is a lucky man!" and saw 12 months of work with Roya fly by in my mind. One thing looping in front of my eyes was the video of “Building Schools in Afghanistan,” a simple 60-second video that summarizes our work of 12 months. My advice was simply to show him that video as it would talk for itself. A few hours later, she was in a meeting with US Secretary of State John Kerry. 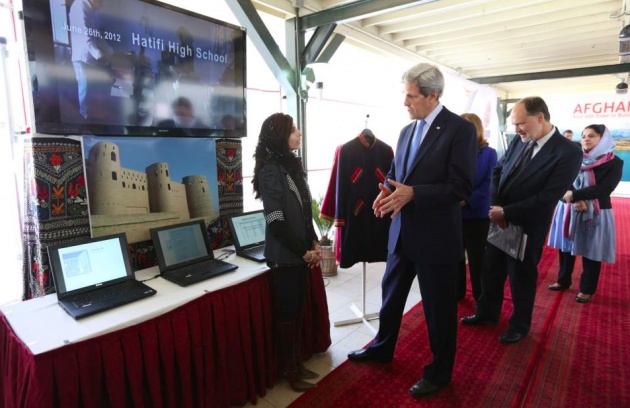 When I look at the picture of Kerry talking to Roya, I hope he understands the great opportunity he was given. John Kerry, along with many other Americans and Europeans, needs Roya Mahboob, her knowledge, skills and network of young Afghan women writers, software developers and social media experts, to move his agenda forward. Roya discussed with John Kerry about Afghanistan economy, education, women's empowerment through social media development, the Afghan Development Project and Women's Annex. Roya resembles Kerry's solution. 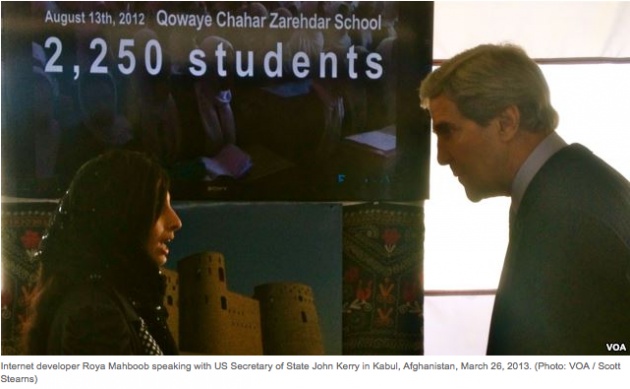 After her meeting with John Kerry followed an interview with Voice of America and a list of journalists that I will share when the articles are published. Here is a quote from Roya Mahboob:

"The IT and social media give this power to women to be independent and have confidence to share their ideas because in social networks no one tells them 'Why are you outside the home?' 'Why are you talking with the men?' because no one knows them."