The amount of secretion of the large intestine is very small. It has high mucus content which is provided by a large no of goblet cells found in its mucosa when colonic content come in contact with these cells. Secretion of mucus occurs also during defection. The secretion is alkaline in reaction due to presence of appreciable amount of HCO3.

These secretions of the cecum contain all the enzymes that are present in the small intestine except that enterokinase is absent. The concentration of these enzymes progressively falls toward the distal colon until the enzyme become totally absent. These enzymes, however, are of little functional significance. 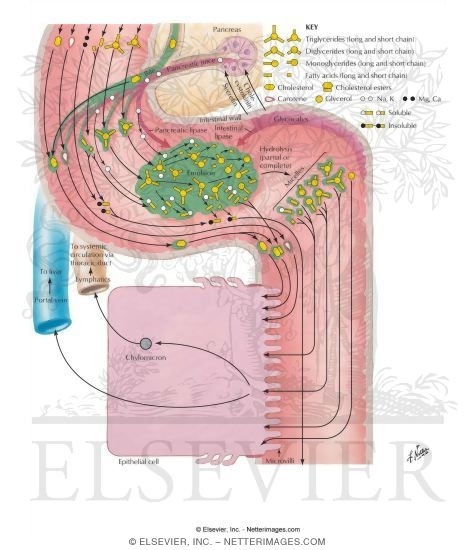 Factor affecting the colonic secretion- following observation have been made 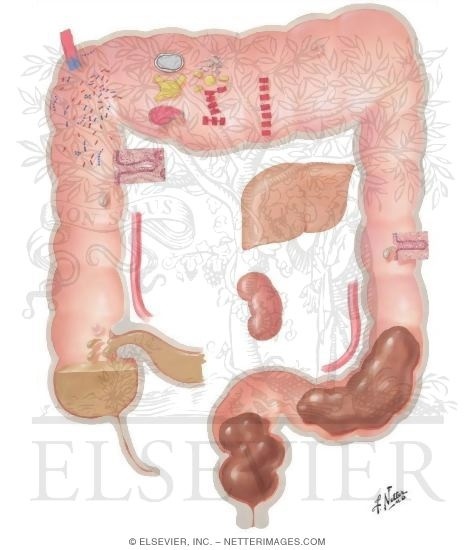 the digestive secretion which enter the gastrointestinal tract make 7 to 8 liter per day and largely absorbed along with product of digestion, mineral and water.daily about 1000 to 2000 ml of the unabsorbed material which is isotonic with blood plasma enters the large intestine through the ileocecal valve.in the large intestine NACL and water are absorbed mainly in the cecum, ascending colon and the proximal part of the transverse colon. NA ion are absorbed by an active process and water follows along the osmotic gradient thus generated. HCO3 is secreted into the lumen in exchange for Cl and some K is also lost by this route. The HCO3react with acids produced by the colonic bactria giving rise to CO2. The large intestine has large reserve capacity and can absorb up to 3200 ml of water per day, provided it at a slow rate; if more fluid enter it at a quick rate, loose motions will result. bile salt interfere with Na absorption and in addition increase efflux of Na into the lumen leading to diarrhea; this is seen clinically in diseases of the ileum or after its surgical removal, both of which result in decreased reabsorption of bile salts and reaching of more of them in the colon. The mineral ocorticoid hormone of the adrenal cortex, namely aldostererone,   also exerts its characteristic effect on Na K transport, i.e. absorption of Na and secretion of K. some mucus is added to that material contained within it; this semisolid material is called feces or stool and is stored within the large intestine can be said to form feces, store it and later expel it. Because most of the fecal contents are of non dietary origin, therefore feces continue to be formed even during starvation. 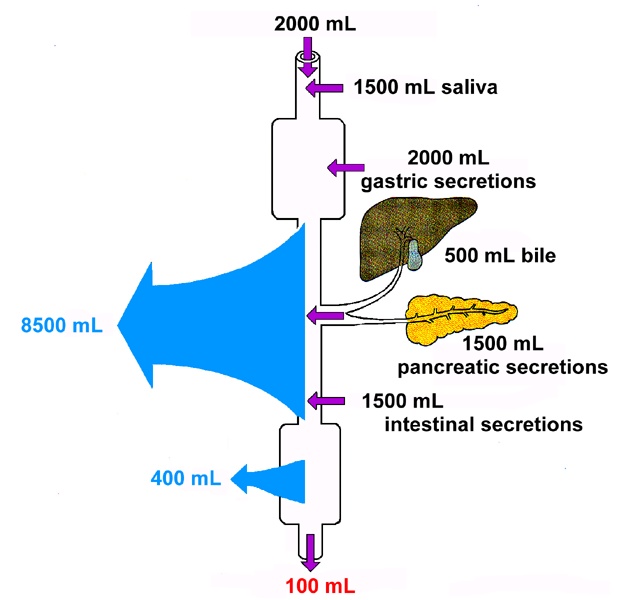 The new born baby’s large intestine is sterile and contains a green material called meconium. Within the first few days a large variety of bacteria establish themselves in the intestine which persists throughout life. the bacteria mostly consist of Escherichia coli and enterobacter aerogenes. the intestinal bactria produce some vitamins, e.g. vitamin K and some member of B complex group such as riboflavin, biotin, folic acid and nicotinic acid. The colonic bacteria also produce short chain fatty acid from complex carbohydrates which exert useful on the colonic mucosa. Thus the large intestine serves as a nutrient factory as well as a cess pool.these bacteria are called the normal flora of the large intestine and any disturbance in their composition such as brought about by broad spectrum antibiotics may result in harmful effects like vitamins deficiencies, superinfections and serve, sometimes fatal diarrhea. The intestinal bacteria may have a harmful effect also on the organism as they utilize nutrient like ascorbic acid, vitamin B 12 and choline and this tends to make the animals deficient in them. Suppression of bacterial growth in animals with antibiotics has been seen to result in improved health, faster growth and better reproduction.

The large intestine can also absorb drugs; several drugs are administered rectally in the form of suppositories or enemata. These include steroids, opiates, chloral hydrate, indocid, salicylates and some antibiotics. Because water is absorbed with ease, its excessive absorption from enemata especially in children can produce water intoxication. 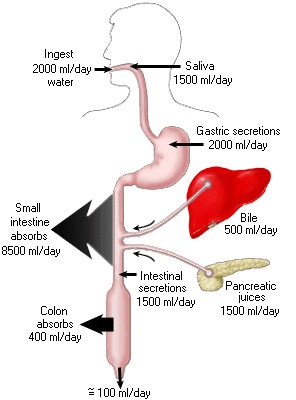 Image credits: 1643606 via Pixabay During digestion, uses of proteins are hydrolyzed into amino acid…

Well , first I need to tell you about best system , You will need Linux black arch , a good graphic …

I am just an average American. I live in California and these are just my thoughts on a very sad, so…