Seth and the Censors – is NEIGHBORS really PG-13 material? 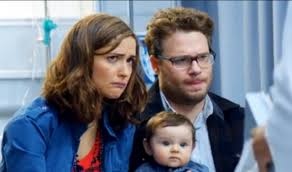 From across the pond, it seems that Seth Rogen is rarely out of the entertainment news. First there was a spat with Justin Bieber. Then the trailer for his next film, THE INTERVIEW, has just been released. New voice cast members have been added to his first foray into adult animation, SAUSAGE PARTY. (This sounds like a sequel to JUNGLE BURGER, one of the last adult animation comedies of the late 1970s.) Now he is enraged by the American film classification system. ‘I keep being told I can’t say that joke because it’s a PG movie,’ he complained. Yes, I can definitely see him trying to insert some drugs humour into HORTON HEARS A WHO (maybe he wanted to re-title it as HORTON SMOKES A WHAT). Then after his character was pelted with rocks in THE SPIDERWICK CHRONICLES, I can imagine he wanted to ad lib, ‘I’m stoned.’ Is the sub-text of Rogen’s complaint that he wants to sell weed to younger kids? ‘You know that lack of self worth you have when you suck at something? There is an answer.’ Yes, it’s called finding your talent. I know most American films say that they have not been endorsed by the tobacco industry – that doesn’t cover marijuana.

I tried to imagine Rogen trying to get the Motion Picture Association of America to agree that NEIGHBORS, or BAD NEIGHBOURS as it is known in the UK, or ‘Abercrombie and Crotch’ as it is known in Poland – they love re-titling American movies for the Catholic audience – should be rated PG-13. Here’s how it might have gone down.

SETH: Hey, good to see you.

SETH: I should have brought my Director’s chair from THE INTERVIEW. (Snickers)

MPAA REP: I know. It’s been in theatres. Grossed over $100 million! You know your market.

SETH: Yeah, well it’s got Zac Efron in it. He’s kind of a teen idol.

MPAA REP: I’m a busy man. I have arranged to re-watch BLUE IS THE WARMEST COLOR for medicinal reasons.

SETH: Oh-kay. Anyway, I want to hit Universal Pictures for a re-release of NEIGHBORS for the teen market, seeing as how we re-released THIS IS THE END to get it over the hundred mill line.

MPAA REP: It wasn’t the end. Didn’t get you sued by disappointed movie goers?

SETH: You should relax, man.

MPAA REP: I tried to take a chill pill but it stuck to my dentures.

SETH: Right. So, I want advice on what you think I should remove to get a PG-13 certificate. I’ve brought some suggestions. (Hands over piece of paper)

MPAA REP: This paper is blank.

MPAA REP: As it happens, I have the screening notes for your movie. (Produces folder from a drawer in his desk)

SETH: You have those incredibly handy.

MPAA REP: I didn’t want to mess up the timing. OK. (Flicks through pages)

SETH: You have colour coded highlighters for rating movies. Amazing!

MPAA REP: Bright colours appeal to stoners. (Reads) ‘Couple attempts to have intercourse in front of baby. Baby turned around so that she doesn’t see anything.’ I don’t have to go any further than that.

SETH: Exactly. There is no graphic sexuality. It is played for laughs.

SETH: Come on, I can do more than partial thrusts. Was this rated by my sixth grade gym teacher?

MPAA REP:  (Reads) ‘Promotion of counter historic views. The Lonely Island was not around in Roman times.’

SETH: That’s not even a censorship issue.

MPAA REP: Sometimes they write stuff to prevent themselves getting bored. (Reads) ‘Alcoholic consumption without consequences. Imbibing of illicit materials. All involving students.’

SETH: It’s practically a documentary, a slice of real life, if you will. You wouldn’t stop showing animals consuming illegal substances; I happen to know one of the dinosaurs in JURASSIC PARK ate a stop sign.

SETH: That’s not even a point.

SETH: No, that would be playing that damn Katy Perry song at the end of every darn romantic comedy.

SETH: A MILLION WAYS TO DIE IN THE WEST is under-performing and I wanted to help Universal Pictures out.

MPAA REP:  (Re-opens folder) ‘Seth Rogen takes shirt off.’ That is the very definition of Restricted. I’m not even going to entertain your request.

SETH: More fool you. I can go moan about the lousy ratings system and get my comments picked up by the Huffington Post! That will change everything. (Storms out)

JUSTIN: Hi, I wonder if you can give me an app that will stop me saying really inappropriate stuff?