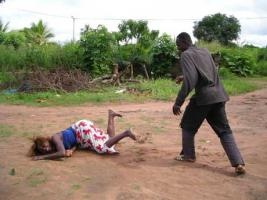 Peace mediators must not remain aloof from the crimes being committed while mediating a conflict, and this particularly applies to sexual violence. From Bosnia to Congo (DRC) to Haiti peacekeepers have themselves been accused of engaging in sexual assaults/crimes. This is perhaps an indication that “mediators” may have inadvertently not sent the right message by not conspicuously raising the issue of sexual violence. UN this week unveiled new guidelines to help mediators address the problem of sexual violence in conflict by placing the issue high on the agenda when brokering peace agreements and ceasefires. “The use of sexual violence to degrade and intimidate men, women or children in war is an intolerable practice,” said the Under-Secretary-General for Political Affairs, B. Lynn Pascoe, at a press conference at UN Headquarters in New York. “Our mediators must be sensitized to the problem and have the know-how to push for agreements at the peace table that can help stop it and to prevent its recurrence.” See Charlize Theron Video for Blog at ‘City of Joy’ DRC Encouraging Sexual Violence Survivors/Victims - diplomaticallyincorrect.org/films/movie/sexual-violence-survivorscity-of-joy/24498 The Guidelines were developed by the UN Department of Political Affairs (DPA), and is titled “Guidance for Mediators on addressing Conflict-Related Sexual Violence in Ceasefire and Peace Agreements” One of the guidelines’ key aspects is the inclusion of sexual violence in the definition of cease-fires and the monitoring of them. Among its key principles, the guidance obliges mediators to engage parties in discussing the issue and to work towards firm commitments to cease all acts of conflict-related sexual violence. “Negotiations and the cease-fires or peace agreements they produce are crucial moments of opportunity to do something to combat this terrible scourge,” Mr. Pascoe said. The guidelines also promote the inclusion of sexual violence in the definition of acts covered by a ceasefire and monitored for, and suggest ways to address the problem in peace accord provisions related to security and justice. See video for blog “Sexual Violence in Haiti Camps”- diplomaticallyincorrect.org/films/movie/sexual-violence-in-haiti-camps/24266 “This guidance does something extremely important. It critically rethinks how we conceive and implement ceasefire and peace agreements. It provides ways of framing agreements that go beyond simply silencing guns – but stopping tactics of terror, such as rape,” said the Secretary-General’s Special Representative on Sexual Violence in Conflict, Margot Wallström. Must say this is perhaps a not very Noticed Change now in way diplomacy is undertaken, but think it is highly laudable as well significant progress away from self-absorbed mediation. See Our film online video Report –“Is Sexual Violence Inevitable?”- diplomaticallyincorrect.org/films/movie/is-sexual-violence-inevitable/28641 See more at our Popular Video Blogs & Current News Event Articles at diplomaticallyincorrect.org/c/war-crimes-justice Link to UN Department of Political Affairs Guidelines - www.un.org/wcm/content/site/undpa/main/issues/sexual_violence By Ambassador Muhamed Sacirbey – Follow @MuhamedSacirbey Facebook = Become a Fan at “Diplomatically Incorrect” Twitter – Follow us at DiplomaticallyX Photo Courtesy – New Europe Online - www.neurope.eu/article/wallstroem-urges-resolution-2009-guinea-atrocities

Ebola Outbreak The image above shows the history of Ebolaoutbreaks in Africa. Notice the dates in t…

I found the best cup of coffee. And guess what? I'm in New Jersey.

I know we've got Italians on this website so I expect this article to start some fireworks. I can't …