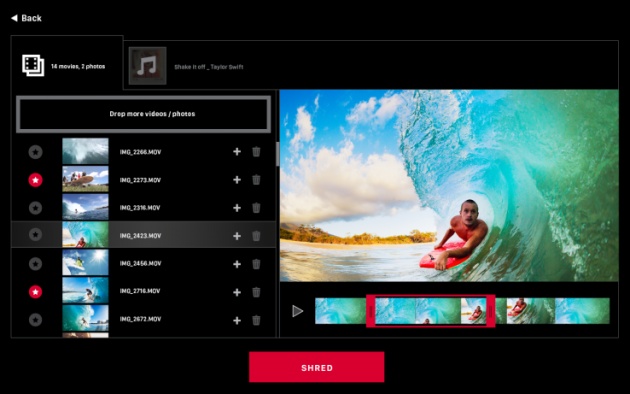 If you’re interested in extreme sports, chances are you own a GoPro and use it to film your sick moves. But folks with a GoPro know how painful it can be to edit down hours of video to 90 seconds of action-packed awesome set to music.

Shred Video, a new startup launching out of Y Combinator, allows users to take footage from their iPhone, GoPro or drone and simply match it with a song from the user’s iTunes library. That’s all. Shred Video does the rest of the work.

Taking into account the acceleration of the camera itself, Shred Video can pin-point the moments of action for surfers, snowboarders, skaters and other acceleration-based sports to highlight all of the coolest clips in your footage. And beyond that, Shred Video matches those epic moments with the beat-drop of the song.

“We noticed a lot of these videos are the same,” said co-founder Mike Allen. “The video starts with exposition footage, athletes traveling to the venue or giving each other high-fives, and then gets into more of the action. The coolest moves are usually saved for when the beat drops towards the end.”

So, Shred Video applied that formula to their own software to not only detect these different pieces of the video but match them with the music.

Since the product doesn’t offer any music of its own — users have to upload their own songs from iTunes — the company steers clear of any licensing issues with artists.

Given the system is based around acceleration, Shred Video can’t do the same thing with a static camera. However, the speed with which Shred Video can turn hours or years worth of footage into a few-minute video is impressive.

Whereas editing in Final Cut or Adobe Premiere can take even experienced editors a few hours, Shred Video can cut these videos down in a matter of seconds.

For now, Shred Video is free to use, with extra costs around saving the video to your computer and removing the watermark for sharing.

You can learn more about the company here

How To Make CentriPhone This is vidio how to make centriphone..!!! And here it is example the re…

We are going to have local artists paint this wall. It will be full of Local artists twist on the St…

The last time GoPro CEO and Founder Nick Woodman stopped by Disrupt SF, the company had yet to go pu…

Slickis a new GoPro accessory launching today with anIndiegogo campaign. Instead of attaching your G…