We discussed up till know about some facts about the Space and solar system and also discussed some characteristics related to this topic. Today’s lecture we will emphasize on the sun’s atmosphere.

We have already discussed that Sun is source of energy and large amount of collisions are take place in the inner core of Sun.  However, solar atmosphere consists can be segregated in the innermost part, outward part of sun, the photosphere, the chromospheres, the corona and the expanding outer layers of the corona that astronomers call the solar wind. The Sun’s visible part is photosphere. We can look right through the chromospheres, the corona and the solar wind, just as we see through Earth’s atmosphere at night.

When we briefly study about the sun’s atmosphere we will conclude that the chromospheres and corona are visible during solar eclipses, at that when the moon lines up between the Sun and Earth. At that time thin chromospheres becomes visible for a few seconds before or after a solar eclipse which is narrow pink, rose or ruby-colored band at the edge of the Sun. only, for eight minutes during an eclipse, the corona is visible to the human eyes independently as a faint, shimmering halo of pearl- white light spreading out from the astral outline. Both, chromospheres and corona is still very harmful to human eyes during an eclipse and should not be viewed directly. 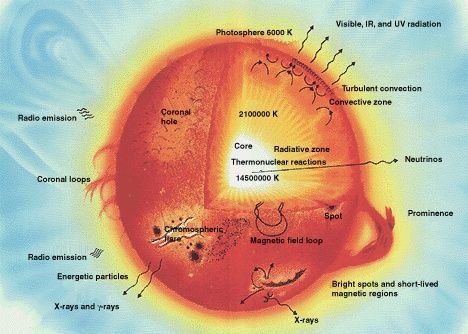 The Solar atmosphere that is lowest, densest level  is called the photosphere. It is the visible light that reaches to Earth from the Sun originates in the photosphere. That light comes from a thin, bright shell which is about 300 km thick and we compare with the sun we conclude that it is less than 0.05 percent of the Sun’s radius.

The Photosphere temperature is about 5510 C. it is a diffuse, tenuous gas with a pressure that is only a small fraction, 0.0001 of the amount of pressure in Earth’s atmosphere at sea level. The photosphere is obscure and it is not transparent, because it contains negative hydrogen. This is due to the; Hydrogen ions block, absorb and emit light, all of which prevent light from passing directly through a cloud of hydrogen ions. 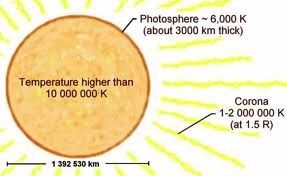 Sunspots are often visible in the photosphere and these are large and dark in color. The biggest sunspots are easily visible with a telescope from the Earth. The Sunspots are not having in same size and also rotate with the Sun movement. They appear and disappear during from hours to months. 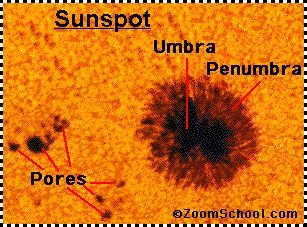 That was the few discussion related to the Sun’s atmosphere in further lecture we will more elaborate this topic.