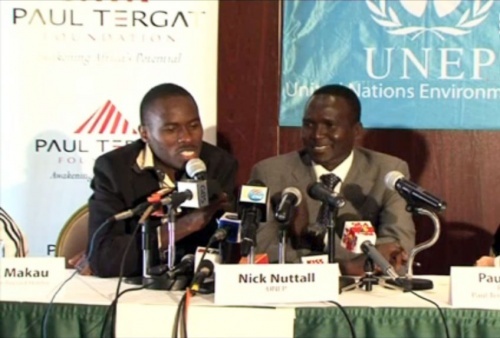 Kenya’s current & former (and perhaps future) world champions joined hundreds on the roads of Nairobi, Kenya, on February 19, 2012 to celebrate the 40th anniversary of the founding of the United Nations Environment Programme (UNEP) and raise awareness about green issues. More than 200 runners competed in a half-marathon race and over 300 others took part in a five-kilometre fun run, the agency reported in a press release. Elite Support Environment & UNEP: Many of the competitors in the half-marathon were elite runners in training for events such as the London Marathon in April and the Summer Olympics in August. Victor Kipchirchir won the race in a time of 1 hour and 27 seconds and Mercy Chemutai was the fastest woman with a time of 1:12:51. In the five-kilometre race, dignitaries and officials from 150 countries attending a UNEP meeting this week in Nairobi were invited to run alongside such luminaries as Patrick Makau, the current world record holder in the marathon, and Paul Tergat, the former world record holder and an Ambassador Against Hunger for the UN World Food Programme (WFP). Kenya as UNEP Home Base Turns to Support Program – Bravo! “This is the ultimate opportunity for athletes to demonstrate their support for the work of the UN Environment Programme in protecting the environment for the past decades,” said Mr. Tergat, whose foundation co-organized the races with UNEP and Athletics Kenya. “This is a landmark partnership between sports and the environment in which celebrities can use their iconic status for the cause of the environment, for which I have a personal passion and commitment.” Also See Film Report on Gisele working for the Environment - diplomaticallyincorrect.org/films/movie/gisele-bundchen-energy-popularized/29687 . Amina Mohamed, UNEP's deputy executive director, commended the participants in today's races.“We also thank the wider public for not only joining this event but also for showing commitment to continue supporting UNEP in its work to protect the environment.” Also many more Reports with Gisele, Ed Norton, Ian Somerlander, Don Cheadie, Priyanka Chopra and Linkin Park + others at: diplomaticallyincorrect.org/c/ecology-diplomat By Ambassador Muhamed Sacirbey Facebook – Become a Fan at “Diplomatically Incorrect” Twitter – Follow us at DiplomaticallyX Link to UNEP Home - www.unep.org/ PHOTO - Former marathon champion Paul Tergat (right) and current world record-holder Partick Makau brief press. Photo: UNIFEED