SUN AND THE SOLAR SYSTEM (Part 8)

SUN AND THE SOLAR SYSTEM 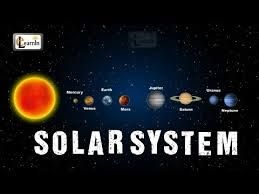 Sun is more important and central part of this universe and we can say that it is also the important and central part of the solar system is the closest star to Earth. As we study the total area and diameter. In the first lecture we study that it is having very much size as compare to the other Objects. The Sun’s light and heat influence all of the objects in the solar system and allow life to exist on Earth. Sun is also having huge mass of hot, glowing gas. The strong gravitational pull of the Sun holds Earth and the other planets in the solar system in orbit. 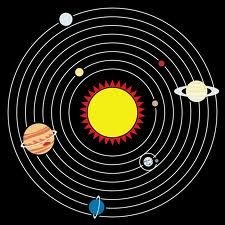 According to the scientist’s research and study Sun is an average star. Sun size, age, and temperature fall in about the middle of the ranges of these properties for all stars. According the Astronomers, the life of Sun is about 4.6 billion years old and will keep shining for about another 7 billion years.

The Sun is beautiful and useful for humans, but it is also powerful and dangerous. Because some rays of Sun are very dangerous for the human.  We know that the earth is circulating around the Sun and also moving around its centre of gravity. As earth turns, the Sun rises outer the eastern horizon in the morning, passes across the sky during the day and sets in the west in the evening. The movement of the Sun across the sky marks the passage of time during the day. The sun’s movement can produce spectacular sunrises and sunsets under the right atmospheric conditions. At the time of night when Sun is not present, Sun light is reflected, due to reflection of Sun Light Moon and planets bright in the night our sky. And we can see then on the Sky.

The Sun is the source of energy and it provides the huge amounts of energy to the Earth every day. The oceans and seas on the Earth store the energy and keep the level of Earth temperature. Plants on the Earth which are useful for human life are using this Sun’s energy to make food and they also provide food for other organisms like the animals. The sun’s energy also creates wind in Earth’s atmosphere. This wind can be harnessed and used to produce power.

Sun’s energy is produced in the core through nuclear fusion of hydrogen atoms into helium. In the radiation zone, heat flows outward through gases that are about as dense as water. Regions of the sun include the core, radiation zone, convection zone and photosphere. Gases in the core are about 150 times as dense as water and reach temperatures as high as 29 million Degrees F or we can calculate in centigrade about 16 million degree centigrade. 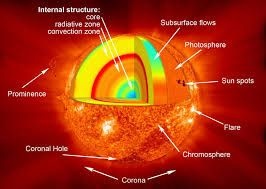 At the day time Sun’s light provides energy for life, sunlight can also be harmful to people. Human skin is sensitive and ultraviolet are harmful for the Human body (skin) which are released from Sun due to the chemical reaction’s in the Sun. Atmosphere of the Earth blocks much of the harmful light with the help of Ozone layer, but  sunlight is still strong enough to burn skin under some conditions. This radiation can cause the skin cancers, which can be fatal. A person can’t see the directly towards the Sun even with Sun Glasses and Sunlight is also very harmful to human eyes. The Sun influences Earth with more than just light. Particles disruptions can interfere with electronic communication and this disruption is due to the explosion of some gases which are take place in the Sun.

That was about the Sun. in the next lecture we will see some other benefits of Sun.