Sundance London: Film Review: THE CASE AGAINST 8: California dreaming ... of the equal right to marry 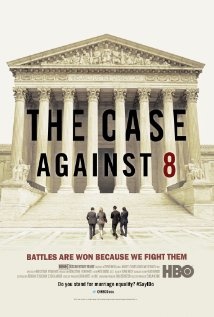 2008 in America was a momentous year. What it gave to some – the election of the first African-American President – it took from others – the rights of gays and lesbians to marry in California. Proposition 8 wasn’t a protein supplement rather legislation, voted for by Californians, to annul the right to recognise same sex couples as lawfully wed. How could Governor Schwarzenegger allow such a thing? He gave up an admittedly ailing film career (COLLATERAL DAMAGE) for this?

In order to overturn Proposition 8, campaigners from the American Foundation for Equal Rights (AFER), whose backers included the film director Rob Reiner (whose most famous film WHEN HARRY MET SALLY features the line, ‘I’ll have what she’s having’ that seems relevant here) and his wife Michele, had to find injured parties whose lives were detrimentally affected by the law. They also had to demonstrate that same sex couples legally wed did not demonstrate a higher risk of abuse of children under their care. Moreover, that recognition of marital rights did not promote same sex relationships above the heterosexual norm.

The struggle to overturn Proposition 8 is depicted in the HBO documentary, THE CASE AGAINST 8, to be given a cinema release in the UK after its premiere at Sundance London. Its directors, Ben Cotner and Ryan White were given access to the legal team and their witnesses who prosecuted the case and stuck with it for five long years, more or less. When you sign up to make a documentary, you’re in it for the long haul.

First, who do you hire to take on the Governator, whose catchphrase ought to be ‘I’ll be backsliding’? The lawyer, David Boies, who unsuccessfully tried to overturn the decision to hand the 2000 Presidency to George W. Bush, may have liberal credentials but he certainly isn’t an established winner. He needs a partner. In the grand spirit of opposites attract, Boies’ 2000 Presidential election result opponent, the man who defended George W. Bush’s right to be President, Republican advisor Ted Olson was also hired. Eyebrows were raised. They were also plucked, decorated with glitter, pierced. You can do a lot with eyebrows.

You might expect these guys to be on the opposite sides of the issue. Gay-friendly Republicans - you imagine them switching off ELLEN on principle, though when host Ellen DeGeneres refers to her partner Portia on the show they probably thought she was referring to a car (and not to Portia de Rossi, sorry ma’am). However Ted Olson is a great believer in the constitution – and not just his own constitution either (I know that’s a cheap jibe, but you can’t expect to defend Bush and get off lightly). He recognises that all people were created equal and that the right to marriage, all the perks, the right to a divorce lawyer – and more seriously the right to sickness, pension and death benefits – is enshrined in that law.

Second, who will stand up and say that Proposition 8 has a detrimental effect on their human rights? Two brave couples, Jeff Zarrillo and Paul Katami (young urban professionals) and Kris Perry and Sandy Stier (middle aged, both with children of their own, who found each other after unsuccessful heterosexual marriages collapsed) were background checked and offered up to the justice system. You should not underestimate the courage of both couples. First of all, they are removing any avoidance of doubt that they are ‘out’ to their families, work colleagues and communities, opening themselves to the tidal wave of prejudice. Secondly, they risk the vitriol – or potentially worse – of right-wing bigots. And they have to expose their families to the same vitriol. Once you step before the cameras, you cannot go back.

So in 2009, the quartet filed the papers to remove Proposition 8 from the Californian statute book. A trial – Perry Verses Schwarzenegger - began in January 2010. If AFER had its way legal proceedings would have been televised in order that some of the proponents of Proposition 8 could have been exposed as bigots. The defendants successfully quashed such a request in order that certain documents couldn’t be produced as evidence. The quartet was indeed subjected to abuse; we hear a death threat issued to Kris and Perry. However, one particularly repellent proponent of Prop 8 – let’s call him misguided – is called to the stand.

When you watch an American documentary, you expect a certain amount of swelling music as sequences build to an emotional crescendo. You get that here; I certainly noticed the soundtrack a little too much (thank you, that’ll be all - next emotionally-manipulating device, please). Otherwise THE CASE AGAINST 8 is a gripping courtroom procedural. It does not have the twists and turns of a really great courtroom drama, but it does celebrate the struggle against adversity. It does celebrate same sex marriage as well, nothing more to be concerned about than heterosexual marriage. There is nothing wrong with desire based on consensus as long as both parties feel the same way and are judged mature enough to make the decision. However, determining who is best able to exercise judgment is another legal quagmire.