SXSW Day 4: The Day Lena Dunham Got Me To Like Her 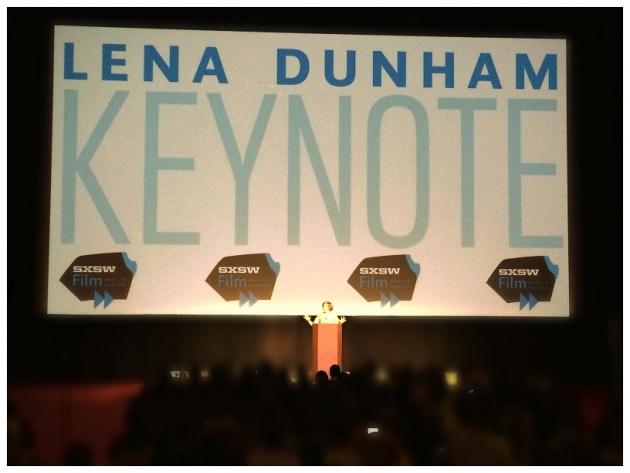 So the day started out with Lena Dunham's keynote. Before I go into detail about that, let me just put this out there: until yesterday, the girl really annoyed me. Like a lot. I found her work to be really masturbatory. Like, how many times do you need to put your name in the credits? Do you REALLY need to star in a show that you already have so many other jobs to do on? Why wouldn't you take your power in a different way and provide opportunity for another woman? I found her apologetic, self-deprecating attitude to be pretty annoying. But, I was like, you know, as annoying as I find her to be, this woman is doing exactly what I'm doing, but she's found her place in the main stream and is doing it for a lot more money. I should probably go listen to what she has to say. So I did.

It was great. She was inspiring. She still had a that apologetic, self-deprecating attitude thing going on (she literally apologized for making a molestation joke on Twitter and then confessed she deleted it), but in person, it was apparent that that is just really how she is. She wasn't putting on an act, she was just talking like a normal human being to a room full of people who look up to her. It's been five years since her first visit to SXSW, and she still acts like she's in a dream she could wake up from at any moment. Although she seems to apologize for literally everything, she also thanks every person for everything, and I think that's great.

She spoke a little bit about where she came from as a filmmaker which was completely new information to me. Apparently she did the whole "DIY Self Taught Film School" thing just like I did. She had stories she wanted to tell, so she bought a camera and figured out how to do it. She did it wrong a bunch of times until she figured out how to do it right. She had one goal in mind: SXSW. She achieved it. Intereresting tidbit I didn't know: "Tiny Furniture" was not her first film to get into South By. She was brought to the festival the year before with another film, "Creative Nonfiction", that was exciting for her, but she clearly marks the start of her real professional career with "Tiny Furniture." She talked about coming back with that one, being in competition, feeling success for the first time and how even though she found out she won the competition before the awards, she was still surprised when they called her name. She told her story in a way that was encouraging, not masturbatory, and I thank her for that.

She told us things she likes (SXSW, Storytelling, Etc), things she hates (Republicans, Ratings, Deadline Hollywood) and things she sometimes likes (Reviews, other things I can't remember). She got laughs and applause and all of us were with her every step of the way.

Especially when she called Hollywood out for being sexist.  Look, I'm not a feminist, and I'm proud of that. I believe in women's rights and I believe that women deserve equality to men in their professions, especially the entertainment industry. I'm finding this weird place in myself where I'm like "I hate it when girls act like they're better than boys, why can't we talk about people?" but then cheer on Cate Blanchett when she proves that women are not a niche in Hollywood and I get all "girl power" about it. Dunham's speech hit me in the same way. She commented on how something needs to change in this industry, and I think she's right. She talked about how the guys on her show, particularly Adam Driver, are getting all of these diverse roles after showcasing their talent on "Girls" but that the females are now stuck in these stereotypes and how unfair that is. Why can't these women stretch their legs and prove that they aren't just America's Sweetheart or Flighty Nood-Nicks? I think I agree with her so hard because she didn't knock any male talent. She merely pointed out that the women on her show should be given more credit.  My favorite thing she said was (and I quote): "This is not a knock on Adam's talent, which is utterly boundless and he's exactly the actor who should be doing all this. It's a knock on a world where women are typecast and men can play villains, Lotharios and nerds in one calendar year and something has to change and I'm trying." And if I'm not mistaken, that's how she ended her keynote.

Newly inspired, audience members got up to ask her questions. Several people (including an amazingly brave mentally-challenged man that every member of the audience and Lena completely supported through his comments and questions, which I found SO cool) admitted to her that they look up to what she's doing and wanted her advice on how to get there. Some people just wanted to know what her favorite "Girls" episode is. One guy just wanted to tell her that him and his Frat brothers watch "Girls" together every week to get girl advice. (She thought that was amazing and hilarious). To every person's question she made sure to tell them how great of a question it was and made a point to give sincere thoughtful answers. My friend Brently even got up to ask her about her comedic influences as a child because his daughter is following in his footsteps as a comedian. Naturally, I got that one on [digital] film: http://www.youtube.com/watch?v=BaJrkYL9820

(okay, I tried to embed this, but got impatient that I had to wait for it to convert, so here's the YouTube link. I believe, later on, you will also be able to watch it in the "My Movies" section of my Film Annex Profile)

Note that she says she loves FRIENDS. Side note: FRIENDS is my favorite TV show of all time. Damn you, Lena Dunham! I like you so much!

Anyway, that was her inspiring keynote. The rest of the day was just as eventful and inspiring, albeit in different form. We saw a screening of "Arlo & Julie" which is a narrative feature produced by a woman named Richelle Fatheree who we will be working with on a short film later this year. It was really exciting to support someone we already have plans to work with and regretfully, our schedule didn't allow us to make it to her afterparty for the film. We're going to meet up for coffee later this week, though. We ended up at a party thrown by Seed & Spark and finally got to meet Founder/CEO, Emily Best. Emily has been a huge support for my film company (TurtleDove Films) and is helping us on a HUGE campaign on their platform. We are raising roughly $20K for start-up equipment to be a self-sustained production company here in Austin. Shameless plug, but, if you're interested in checking it out and would consider giving a (no amount too small) donation, here's the link: www.seedandspark.com/studio/turtledove-films. That was really fun and we got to chat with some other local filmmakers we had previously hooked up with on Twitter and will hopefully see more of now that we're connected. I love the internet!

We then tried to go see "Grand Budapest Hotel" but found out they ran out of queue cards hours before we even got there (The Paramount is an 1100 seat house, I've NEVER gotten denied there, even in the days I was badgeless) so that was kind of a bummer. It was the one headliner I was really looking forward to. But, it made me feel better to know I would have an opportunity to see it in theatres and that I'm doing a great thing by making the truly independent films my priority.

So, that was Day 4. Day 5 will be a little less eventful, although probably just as exciting. I was scheduled to open the coffee shop I used to Barista at (helping out during the maddness and earning a couple extra bucks) and have rehearsal for a sketch show I'm in, so I'm taking it easy until a couple of screenings later into the night. More ramblings tomorrow! XOXO

Elena is an actress, filmmaker and social media manager. She got her BA in Theatre Arts from St. Edward's University in Austin, Texas. She co-owns Austin-Based Film Production Company, TurtleDove Films, with Duncan Coe.

Ever have a weekend all planned out in the perfect way and then things take a turn? Well, I have and…