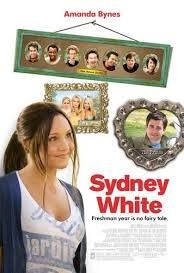 This was the movie I watched last night and it was really great! I really had a good laugh and it was heart warming. ♥ I'm gonna review it today. :)

In theory, any complaints about the sheer ridiculousness of Sydney White can be hand-waved away with the excuse "It's a fairy tale." Which it is: It's Snow Whiterecast as a brain-dead campus comedy. But at some point, a line has to be drawn. Long before the most preposterous, eye-rolling finale in recent movie history,Sydney White has already trotted out so many ridiculous plot points that even evil shape-changing witches are easy to accept by comparison.

After her mom's death, Sydney White (Amanda Bynes, reprising her ditzy chipmunk act from She's The Man) was brought up by her plumber dad and his construction-worker friends, which is meant to explain her lack of girly graces. But unless they raised her in a cage in a cave, it doesn't explain her total ignorance of cliques and snobs. Honoring her mom's memory by pledging her old sorority, Bynes is oblivious about the ways her tomboy habits and fashion apathy keep her from fitting in with all the Prada-wearing, bottle-blonde plastic people in thrall to ultra-perky evil school queen Rachel Witchburn (Sara Paxton, channeling Reese Witherspoon from Election). So she's genuinely shocked when Paxton boots her from the sorority, and she has to move in with the "seven dorks" who live in a run-down firetrap called The Vortex. Then, in a snobs-vs.-slobs plot that feels older than the Brothers Grimm handbook, Paxton plots to have The Vortex razed and replaced with a Greek Life Center, and it's up to Bynes and the dorks to reclaim school rule from the Greeks and save their home.

Like Disney's dwarfs, Bynes' dorks only have one personality trait apiece—one talks through a puppet, one's an angry blogger, one's the world's oldest Cub Scout because he never learned to tie knots, and so forth. But mostly, they're all unreconstructed Revenge Of The Nerds super-spazzes who, at one point, gather around one of Bynes' bras and gasp, "That thing has touched boobs." That's about the height of the adolescent comedy, which comes packed with cutesy "modern"Snow White touches—Paxton uses the school's "Hot Or Not" MySpace page to see whether she's still the fairest of them all, and when Bynes inevitably supplants her, she poisons Bynes' Apple… computer. And so forth, and so on, with bad puns and worse slapstick and stupid, embarrassing characters doing stupid, embarrassing things until it's time for the big uplift moment at the end, also stolen wholesale fromRevenge Of The Nerds. The equally awful She's The Man at least brought Twelfth Night to a teenage crowd unlikely to be familiar with the Shakespeare play. What's the excuse for dumbing down Snow White to moron level? Are there really people out there who thought the original version just didn't have enough toilet jokes?