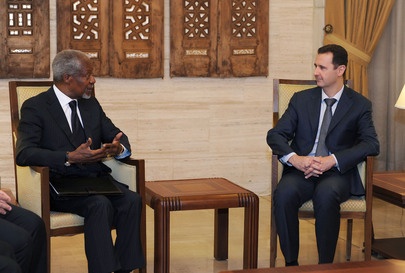 Debating success or lack thereof of Kofi Annan’s Mission to Syria and the political track could detract from that which perhaps can and must be tackled immediately regarding Syria – the urgent humanitarian situation and broad, overwhelming evidence of war crimes. Political Track on Syria for Now Detracting from Possible: Expecting much from Kofi Annan’s mission is not realistic. As much as we can fault Mr. Annan for perhaps too tolerant view of Syria’s Regime and Bashar Assad, he has very little room too maneuver. That is probably even good, because Mr. Annan could be pressured and overreach with concessions to Assad that could be misused to retrench his hold on Syria and rehabilitate his status internationally. Pursuing Rule of Law & Justice: The horrific executions, torture, sexual violence and efforts to besiege/starve his own people must be the focus. UN Humanitarian Chief Undersecretary General Valerie Amos made a brief trip into Homs as well as Damascus. She said she was “horrified.” Amos reported, “Almost all the buildings had been destroyed and there were hardly any people left there. I am extremely concerned as to the whereabouts of the people who have been displaced from Baba Amr.” Straight Forward & Simple Agenda with Contingency Provisions: Those who see need to have Assad step-down should at least for moment set aside such provisions from any proposed UNSC Draft Resolution. Rather, the focus is needed and ripe for call for unconditional cease-fire and regardless of whether such accepted/honored: 1. Immediate steps deemed necessary by UN Humanitarian efforts as led by Under-Secretary General & Humanitarian Chief Amos, 2. Referral of Syria to International Criminal Court for investigation and possible prosecution – no need to name culpable now if referral adopted, but identify if China or Russia block. 3. Establish provisional authority for study of how to implement “humanitarian corridors” or “safe areas” (having followed bold track established by then Venezuela Ambassador Diego Arria and learned lessons of more effective implementation). Leave Political Track for Later Opportunity Rather than confront Moscow and China on issues of regime change, Arab League, US and Western Democracies should press upon Assad’s allies the most urgent and that which is most difficult to reject. Monday’s meeting of UN Security Council may be more complicated by Iran issues and particularly ill-timed Israeli air strikes on Gaza. Undoubtedly Syria allies will seek to detract from focus on Assad regime. Even more reason to define objectives that cannot be reasonably set aside by Moscow and Beijing. See our Latest Video for Blog on Syria Crisis – “Syria Retaking Initiative from China, Russia & Assad Allies” - diplomaticallyincorrect.org/films/blog_post/syria-retaking-initiative-from-china-russia-assad-allies/47163 By Ambassador Muhamed Sacirbey – Follow @MuhamedSacirbey Facebook = Become a Fan at “Diplomatically Incorrect” Twitter – Follow us at DiplomaticallyX See more at our Popular Video Blogs & Current News Event Articles at diplomaticallyincorrect.org/c/war-crimes-justice

●Why you must go to China for Higher Studies● I have been studying in China for two years. Whene…