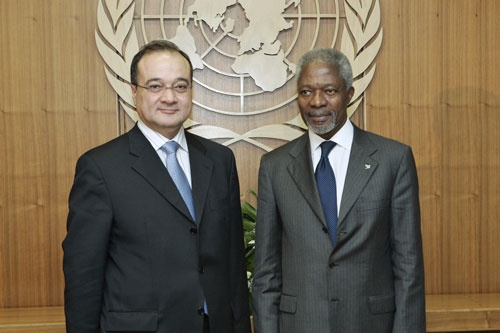 Hidden significance or just providing more pieces to a new bureaucracy? Naming of "Deputy Joint UN & Arab League Envoy for Syria." is not unprecedented. Bosnia had several levels of UN, EU and US envoys. Are UN and Arab League anticipating a prolonged diplomatic effort to resolve Syria? It took 0ver 3 and 1/2 years to end open conflict and siege in Bosnia & Herzegovina. Probably more though than merely building structures and bureaucracy. Rather, it may be about the substance of how and who defines Kofi Annan's mandate as "envoy." A Palestinian for an Arab Solution to Syria: Do not believe that League of Arab States were comfortable with the optics of Kofi Annan a non-Arab leading the effort while at the same time the Arab States are emphasizing an "Arab Solution" for Syria. In appointing the Palestinian Authority's well respected former longtime UN envoy Ambassador Nasser Al Kidwa, (Photo from 2005 with then UNSG Kofi Annan),UNSG Ban Ki-moon and League of Arab States counterpart SG Nabil ElAraby brought also a personality likely to resist efforts that would rehabilitate Bashar Assad. While there was a period when Syria was a welcome home for the PLO and other Palestinian factions, the times are changing or more like shifting in tectonic measures. I was surprised when in our interview beginning of last year current Palestinian UN Representative Ambassador Riyad Mansour bluntly supported the trend for change in the Arab World even before the Tunisian, Libyan and Egyptian revolutions had succeeded. Perhaps it was recognition that after more than half-century the status quo of Arab politics had pumped the Palestinians for rhetorical fuel, but paid few dividends for the Palestinian cause. - See our Video for Blog Interview - diplomaticallyincorrect.org/films/movie/change-arab-world-egypt-tunisiagood-bad-for-palestinian-cause-interview-p2/24298 Diplomatic Charm & Sharp Elbows: According to the Statement from the UNSG's Office: "Mr. Al Kidwa will assist the Joint Special Envoy, Kofi Annan, in his efforts to find a peaceful settlement to the bloody unrest raging in Syria. 'Mr. Al Kidwa brings to the position years of diplomatic experience and deep knowledge of the region. 'Prior to his appointment, Mr. Al Kidwa served in various capacities within the Palestinian Authority, including as Minister for Foreign Affairs from 2005 to 2006, and Permanent Observer of Palestine to the UN from 1991 to 2005." Keeping "Envoy" Efforts on Track & Not Mediating New Plans: Noteworthy that after former UN Secretary General Annan had labeled his role in terms of "Mediation," there was no such term used in announcing Mr. Al Kidwa or the function. The UNSG's statement, and I'm confident with Arab League backing, referred to the functions performed by Annan and Al Kidwa as "Envoys." The Arab League is keen that Kofi Annan does not become his own free agent proposing his own ideas, but rather that he stick to getting the current Syrian regime to accept the Arab League Political Plan adopted two months earlier- whose main element is political transition away from Assad. Clearly some were not pleased with Annan describing himself as "mediator" and then claiming exclusivity. Kidwa is an experienced diplomat with both sharp elbows when needed and requisite charm. As "Deputy Envoy" it may be the objective to encourage the Envoy to stick to plan, the Arab League Plan. now also endorsed by the UN General Assembly even if vetoed by China and Russia. Regaining Initiative Back from Assad;s Backers China & Russia: Beijing and Moscow had eagerly grabbed upon the "mediator" role for Kofi Annan and pressed for "dialogue without preconditions." This clearly risked derailing political transition and rehabilitating Assad and encouraging his bid to hold onto power indefinitely, or at least until 2028 - as his "constitutional referendum" would have legitimized. See Our Latest Related Popular Video Blog -"Kofi Annan Mediator 2 Old or Facilitator 4 Political Transition" - diplomaticallyincorrect.org/films/blog_post/kofi-annan-mediator-2-old-or-facilitator-4-political-transition/46781 See more at our Popular Video Blogs & Current News Event Articles at diplomaticallyincorrect.org/c/war-crimes-justice By Ambassador Muhamed Sacirbey – Follow @MuhamedSacirbey Facebook = Become a Fan at “Diplomatically Incorrect” Twitter – Follow us at DiplomaticallyX