TAJ MAHAL, THE WONDER OF THE WORLD. 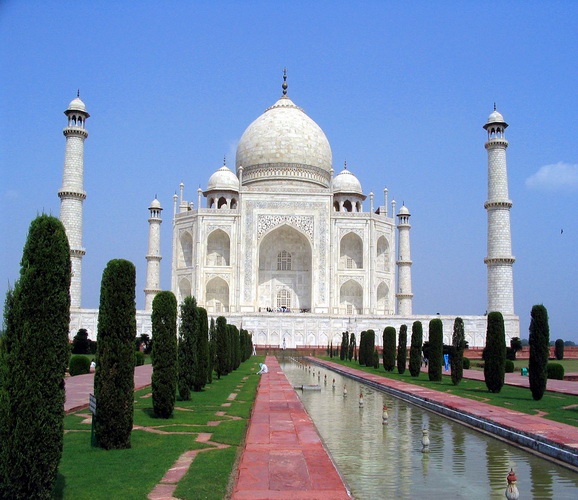 When we speak of the Seven Wonders of the World, mentioning of Taj Mahal is inevitable, it is so precious and beautiful, it is everlasting symbol of love which was built by the Mughal emperor shah jahan in the seventeen century in the memories of his beloved wife Mumtaz Mahal.

The Taj Mahal is located in the heart of Agra city on the banks of River Yamuna, this monument is located in such a way that it is easy to reach it from anywhere in Agra. 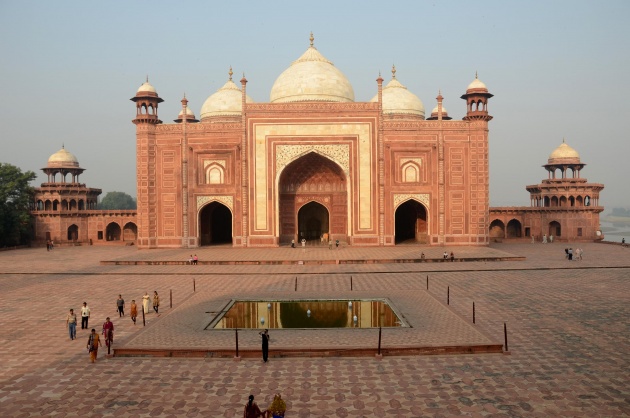 For centuries The Taj Mahal is has been an inspiration for the poets, painters, musicians and art lovers, who has tried to capture its utmost beauty by colors, music, photos, and words, thereby paying their homage to this flawless architectural creation. 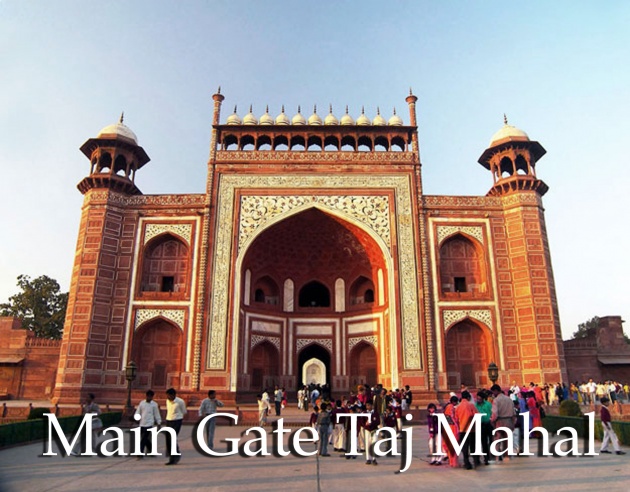 A council of the finest architects was appointed to design the Taj Mahal, chief architect Ustad Isa along with his son Ustad Ahmed started the construction of this monument, a workforce of 22000 of craftsmen was employed from across the country to build the monument, which took a total of 22 years.

This historical monument is the finest example of the Mughal architecture, it is a style that combines different elements of Islamic, Persian, and Indian architectural styles, the entire Taj Mahal complex covers a massive area of 42 acres in total. The five main sections of the complex are the mausoleum, the main gateway, the garden, the mosque, and the jawab. 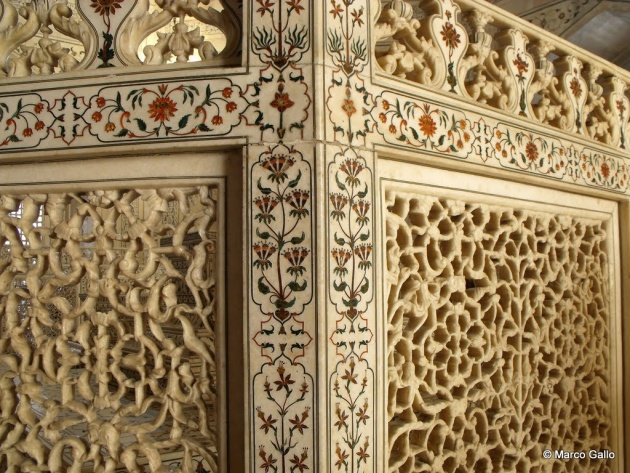 The main tomb of the Taj Mahal stands on a square platform, the base structure of which is very large and multi chamber with chamfered corners, the tomb is a symmetrical building with an arch shape doorway topped by a large dome with a multi chambered base having chamfered corners, four minarets frame the tomb one at each corner of the square, facing the chamfered corners, each minaret is 40 meters tall, and is divided into three equal parts by two balconies and at the top of the minaret is there is a final balcony it is shaped like an umbrella, each minaret is built in such a way that it slants towards the outer edge of the whole construction, this was done to protect the main building from any kind of damage. 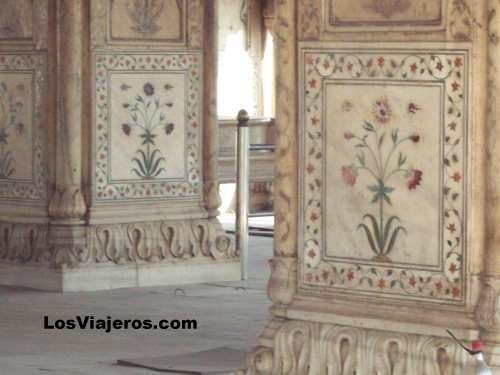 Another truly marvelous piece of architecture of the Taj Mahal is the main dome which is a unique blend of Islamic and Persian architecture, it has a diameter of 51 feet and height of 81 feet, because of the shape it is often called onion dome or amrud (Guava) dome, the top of the dome is decorated with the carved lotus design, which adds to its height, further of the top it has a bronze spire which was originally made of gold but was replaced in the early 19th century, the tomb is further topped by a crescent shaped moon the horns of which points towards the heaven above, there are four other small dome which are shaped like umbrella on the top of the building.

The exterior of the Taj Mahal was built by expensive white marble, there are carved floral designs and carved paintings on the walls in red green combination, and the whole Holy Quran is written on the walls. 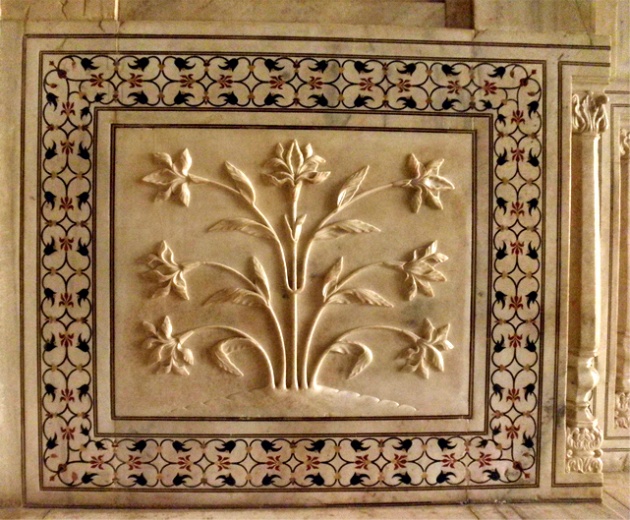 Its beauty is not limited to just the outside view, but artwork and carvings inside this monument are even more beautiful and fascinating, there are two levels inside Taj Mahal that consists of eight rooms each, these rooms were used to bury the members of the royal family, the graves of Mumtaz Mahal and Shah Jahan lie side by side in an elevated chamber, these graves are also decorated with verses from the Holy Quran, another masterpiece inside the Taj Mahal is the net made of marble which surrounds the graves of shah jahan and Mumtaz Mahal. 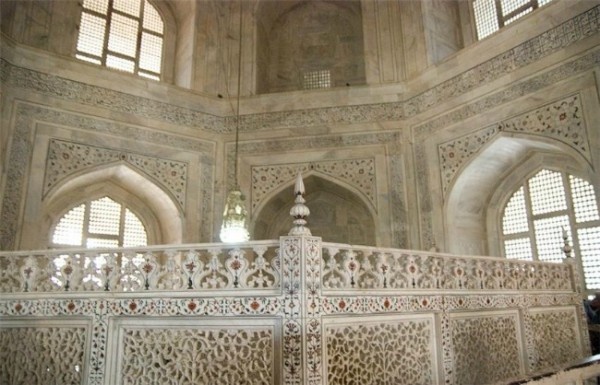 There is a marble water tank in the center of the garden which supplies water to the garden, it also reflects image of the Taj Mahal. 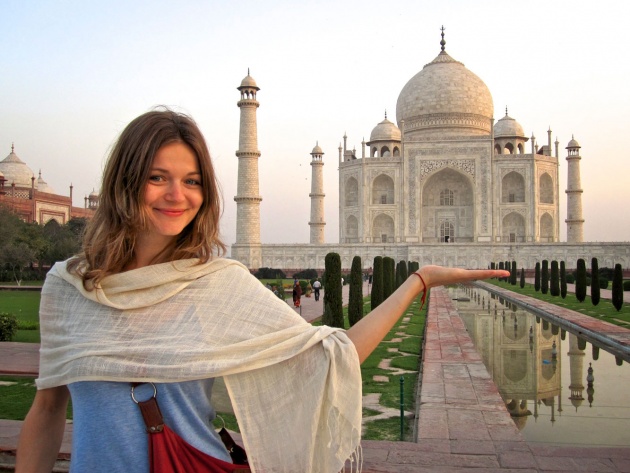 The Taj Mahal is the pride of Muslims of India, is in a real threat which is environmental pollution, the white marble is turning into a yellow color because of acid rains, serious efforts are needed on part of the Indian government to protect this wonder of the world, the most beautiful building of the world, if we cannot build a wonder, we can protect one.