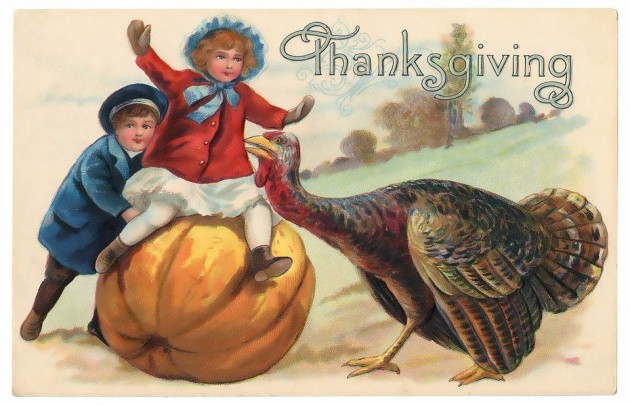 If we go through the reason of celebration of Thanksgiving Day, we come to know that the main purpose of celebrating of this day is to express happiness and saying thanks to God in the form of prayers for his blessings of the harvest and the preceding year.

So, fourth Thursday of November the United States of America celebrate “Thanksgiving Day”. On this day Americans spend time for their families and also gather for football and feasting. On this day people also send different gifts to near and dear ones.

Second Monday of October, Canada also celebrate its Thanksgiving Day and now this day is also celebrated in several other places of the world with the similar celebrations.

In 1620, when a religious group known as Pilgrims left Plymouth and arrived in Massachusettson the board of the ship called Mayflower. This ship was carrying approximately one hundred and two passengers.Their first winter in Massachusetts proved full of hardship. The reason was that, as Pilgrims arrived too late to farm the land. Due to this half of the colony of Plymouth starved and almost forty six people died out of one hundred and two. In this difficult time, two of Native Americans (also known as Red Indians) named Squanto of the Pawtuxet tribe and Samoset of the Wampanoag tribe helped them a lot and taught the remaining survivors how to grow maize, corn and other crops. Red Indians also taught the art of hunting and fishing to the Pilgrims. When they got a rich harvest of corn, beans, pumpkins and barley in 1621, Governor William Bradford proclaimed to celebrate the bountiful harvest and invited a group of the Red Indians including the Wampanoag chief named Massasoit. They ate berries, boil pumpkin, fish, plums and clams. However,it is not sure that what the exact menu of their historic banquet was. Governor William Bradford wrote in his journal that he sent four men out fowling geese and ducks and that the Wampanoag guests arrived bearing five deer. On that day, they thanked and praised Lord for all the food and wealth which He gave them. This is how Thanksgiving Day started.

In 1623, during the period of drought, pilgrims kept fasting and prayed on the calls of Governor Bradford. When they were praying suddenly rain came and in this way they celebrated their second Thanksgiving Day. In 1789, during the American Revolution President George Washington gave official status to Thanksgiving Day and proclaimed to celebrate this day on November, Thursday and his public prayed to Lord for the formation of new constitution and nation for the happy conclusion of country war of independence. George Washington and his successors named James Madison and John Adams designed days of thanks during their presidencies.

In 1817, Thanksgiving Day became an annually official day by New York which was the first state of America who announced to celebrate this day officially. However, other states of America also celebrated holiday on this day but on different date and day. The South Americans were unfamiliar about the tradition.

In 1827, an editor and poet named Sarah J. Hale (she was also known as Mother of thanksgiving)  launched a campaign for establishing Thanksgiving as a national holiday. Sarah J. Hale sent several letters to senators, presidents, governors and published numerous editorials. Finally in 1863, when the civil war was at the peak President Abraham Lincoln paid attention to Sarah’s request and discussed with her different ways through which he could unite the whole nation.  Abraham Lincoln proclaimed the 1st national Thanksgiving Day on the last Thursday with the date 21st November.  In 1939, President Franklin D. Roosevelt set the date of Thanksgiving and proclaimed to celebrate it on last Thursday with the date 25th November. Later on in 1941, Congress passed a bill for celebrating Thanksgiving Day the fourth Thursday in November with the same date.

One of the most important tradition of Thanksgiving Day is family feast. During dinner all family members sit together and thanks to God in the form of prayers on His continuous blessings. It is also become a special day for such relatives who live far away and different places. On that day the near ones get the opportunity to come together and celebrate Thanksgiving Day.

“88% of Americans surveyed by the “National Turkey Federation” eat turkey on Thanksgiving. 46 million turkeys are eaten each Thanksgiving. 22 million on Christmas and 19 million turkeys on Easter. In 2011, 736 million pounds on turkey were consumed in the United States. Turkey consumption has increased 104% since 1970.….”[1]

If we thoroughly study the history for getting the information about what was the exact menu on very first old Thanksgiving Day. We will not get valid evidence which prove that during the dinner turkey was eaten on the first Thanksgiving Day. But now during the feast it has become tradition that roasted or deep fired turkey available on every dining table because without turkey dinner is considered incomplete. Along this people also ate sea food, pumpkin pie, Cranberry sauce, beans and corns.

Another famous tradition of this day is Thanksgiving Day Parades, this tradition was started after the proclaimed of Thanksgiving Day as an official day by President Abraham Lincoln. On that day, now a days parades are accompanied with celebrities and musical show. The main purpose of such parades is to provide entertainment and lift the spirits of the spectators.

During Thanksgiving Day watching the match of football is a popular tradition of Americans. As American people are known for their passion of football so on that day football match is organized and spectators enjoyed the football match whether they are watching it sitting in stadium or on television.

On Thanksgiving Day people decorate their homes with dried fresh flowers and wreaths. They also give new look to their home’s interior, light lamps and best antique sliver cutlery of China are used for dinner.

On Thanksgiving Day people send warm wishes in the form of loving massages and Thanksgiving cards to their friends, family, relatives and colleagues. 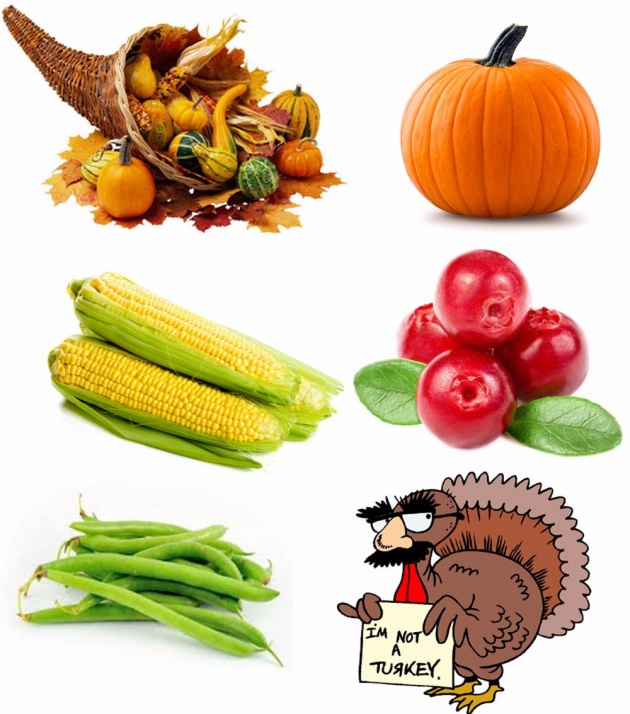 Thanksgiving Day around the World:

Here I am going to discuss about some countries……..

In Canada Thanksgiving Day held on October’s second Monday. Canadians celebrate official holiday on that day in churches and spend this day in a secular manners. They Thanks to God for the bountiful harvest and feasting on mashed potatoes, backed turkey, corns and gravy are common. In Canada parades are also organized.

In Germany Thanksgiving Day celebrated on the first Sunday of October, people thank to God for bountiful harvest and pray to him for good future. In rural areas churches are decorated by autumn crops and hold festivities. In some places of Germany there are religious processions or parades are organized.

Chinese celebrate this festival on the full moon on month of August of 15th day. On Thanksgiving Day, Chinese families sit together and enjoy their feast with a roasted pig or turkey, mashed potatoes, harvested fruits and most favorite Chinese traditional round and yellow “moon cakes”. Moon cakes are yellow and round like moon.

In Korea, Thanksgiving Day celebrations start on 14th of August and continue three days. On that day Korean people make unique dish named Songpyeon. Ingredients of this dish are rice, sesame seeds, chestnuts and beans. Before eating the food, all family members gather under the moonlight in the remembrance of their ancestors. They also 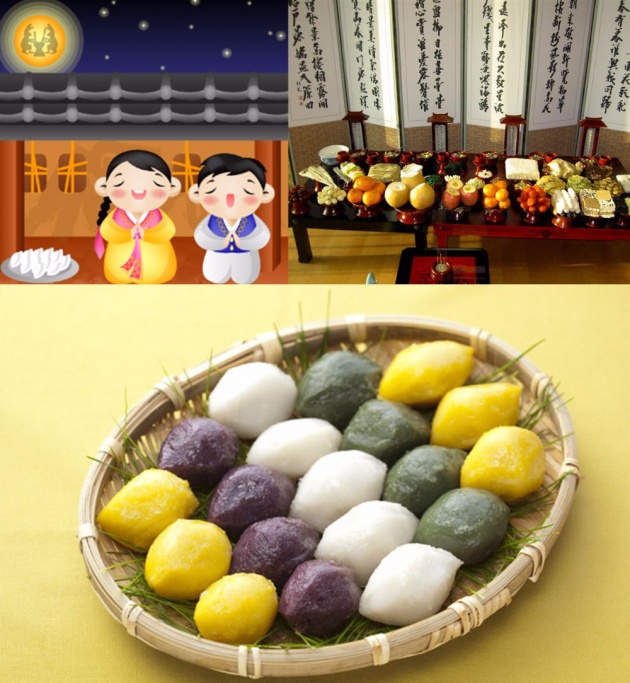 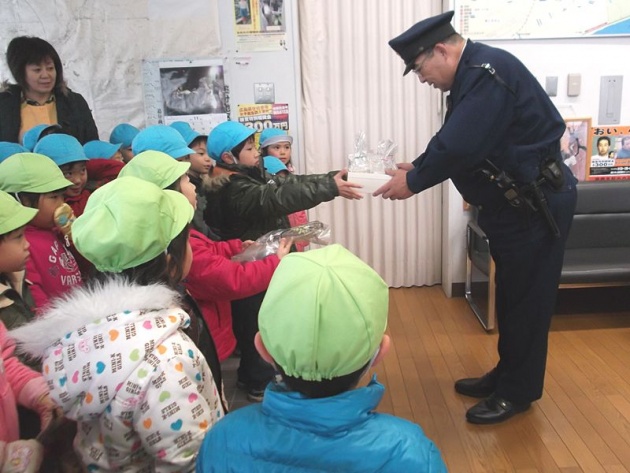 Thanksgiving Day is one of the oldest festival of United Kingdom. Very first time Thanksgiving Day held in churches by Robert Hawker in 1843. They thanked to God of fertility and offer him the first sheaf of corn. Churches was decorated with home grown crops and fruits. Currently in United Kingdom it celebrated in late September in schools and churches with praying. They decorate schools and churches with baskets of fruit and food and these baskets are given to poor and homeless people and local charities.

As Thanksgiving Day is going to celebrate on 25th November and like always bitLanders also celebrating this upcoming event. For celebration of Thanksgiving Day bitLanders launched wonderful outfits for both female and male at bitFashionista store on free. Now everyone on bitLanders can get these outfits on free and can give different look to their avatar.

So guys what are you waiting for go and get these free outfits and give a big thanks to bitLanders on this Thanksgiving Day..... :) as this is a relaxation that there is no need to spent your gems on purchasing these cool outfits. 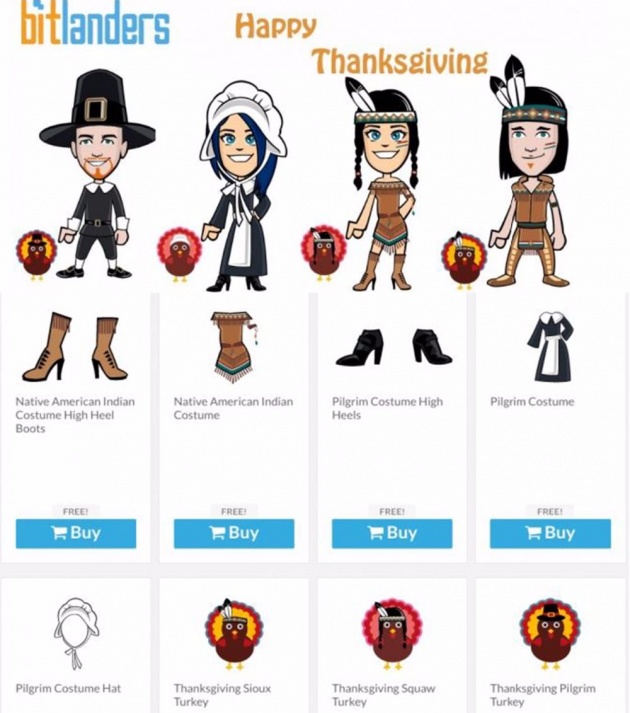 In the End I will say a “Big Thanks” to bitLanders Team and Happy Thanksgiving Day to my BitLanders family. ^___^

Thanks for sparing time in reading My 34th attempt for my virtual home "BitLanders".... Stay Connected for more articles.....  ツ