After nearly 10 years of being successful in Online Film Distribution, Social Media and now a new Gamification technology @bitLanders, I thought I could support and inspire others to do well in their Digital Life, learn how to build Digital Real-estate and Financial Independence. Three years ago, I decided to support Roya Mahboob in the construction of Internet Classrooms in Afghanistan and the creation of a Curriculum for Digital Literacy so that we can educate and empower young women in Afghanistan and other developing countries. To this day, we created 13 classrooms and connected 55,000 Afghan girls to the World Wide Web! Digital Citizenship became an obvious solution to geopolitical issues in Afghanistan and other developing countries. The Digital Currency Bitcoin helped us empower women financially.

This year, in 2014, three more people joined Women's Annex Foundation: Adriana Lopez Alvarez Rulli, Amy Porter, and Alessandro Hamada. And three major thought leaders in the industry of Social Media and High Tech joined forces with Roya, myself, and the Women's Annex team. They are:

Today is Thanksgiving, and I received the best Thanksgiving present I could ever imagine. One picture is worth a billion words: 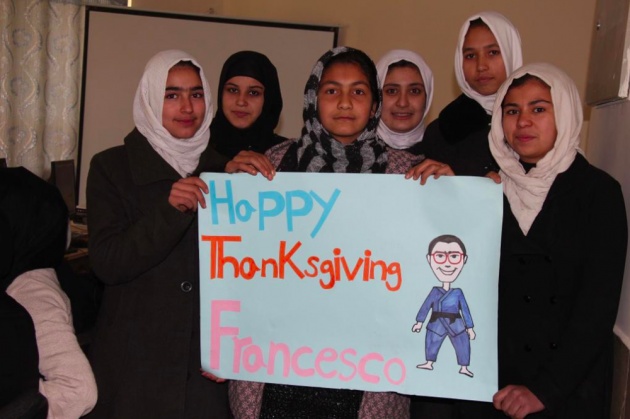 Believe in yourselves, fight hard and never stop thinking! Become a Superhero and support the Afghan Girls Superhero Factory at Indiegogo or at Women's Annex Foundation.

Happy Thanksgiving to all!