The art of keeping things simple

As usual, a phone call to my mother enters a phase where she has to put up with waffle about cameras, editing and online presence as she patiently listens, hoping to decipher whether I’ve been eating properly through it all. I talk about creating a successful web series, chemistry with other creative minds and the ground work to make something as good as I can with as little resources as possible. Then, from out of the blue, she says: “Have you seen Simon’s Cat”, a few mouse clicks later, I knew she understood me completely.

Simon’s Cat by Simon Tofield is a great model for success for anyone looking to make a name for themselves in illustration and animation. Simon’s first animation in the series ‘Cat Man Do’ won the award for Best Comedy at the British Animation Awards in 2008. From there, he made animations along the same theme and was soon fetching a huge amount of views on YouTube. During that time; Simon’s Cat has had episodes published into books, received distribution from Walt Disney Animation Studios and a cartoon strip in The Daily Mirror. What’s impressive, is just how simple the animations are.

All the episodes consistently contain a distinct art style which is bears no colour or technical shading. They are flash animations made up of clean outline drawing of black on white. There are only a few characters that appear during the whole series and often, besides environmental sound design, you’ll only hear the ‘mew’s’ of Simon’s cat, which is voiced by Simon himself. In other words, it can be made by one person with no language barriers, it has international appeal. 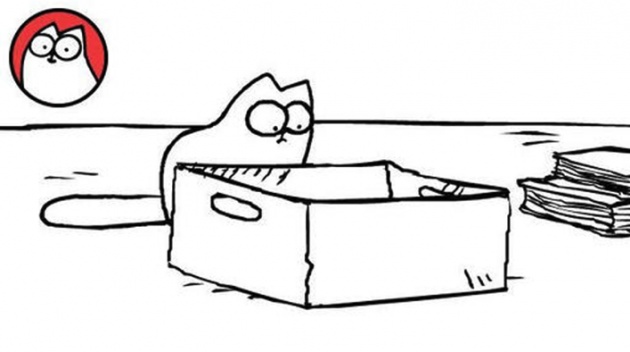 What makes the animation so good then? Simply put, It’s Simon’s cat. Simon Tofield has cats of his own and has full responsibility for his inspirational felines. Having had cats myself as many people have, I’m all too aware of the amusing activities cats are capable of. Simon’s Cat successfully observes this, bringing their captivating nature to life with detailed and accurate expressions.

Simon’s Cat has story potential that could see the series continue for years to come. It’s relatively simple to make and appeals to practically anyone. As you would expect, the YouTube channel is clean and easy to navigate to all the places that matter, such as: Twitter, Facebook, the official website, merchandise and so on. On each of the video thumbnails, there’s a little logo, which creates an easy association with the series like a seal of approval. Everything is consistant.

From my own personal point of view, I’m still working out how I can create a more consistent identity for myself online. Each of the films I’ve made have been very different from one-another. In time, I would like to have all the things in place so that I feel like I know what I’m working towards. All of my social networks working as one to serve dedicated projects that have an expanding fan-base. I still feel there are cobwebs of old unfinished projects that need to be detangled and the fog of new endeavors still yet to become clear. Outside of production; there’s working life and the sound of another Brit yearning for better weather. Keeping things simple is not so simple, but keeping the faith is standard.

Thanks for the continued support and love your mamma! :)