The Arts of the East

Oriental, or Eastern, art is quite different from Western, or European, art, Eastern artists do not simply copy from nature. They like to show not so much what they see, but more what they feel. They try to show nature's mystery and poetry.

many oriental styles of the art began in India. from there, they traveled to China and then to Japan. When a style arrived in a new country, it was changed by the local artists to fit in with their own ideas. Eastern artists did not try to find new or individual styles. They continued and developed the age-old fashion that they were used.

THE ART OF INDIA

Indian painting, sculpture, and architecture were based on religious belief. Indian art shows the influence of Hindu and Buddhist teachings. The artists were interested in spiritual qualities of their gods. Yet, in many ways they made their gods look like human beings. Religious buildings were covered with rich carvings and paintings that were intended to impress all who saw them.

SCULPTORS TURN TO THEIR GOD

Buddhism began in India in the 6th century B.C. In the beginning, the Buddha showed by a sign, or symbol, such as a wheel of the Tree of wisdom. In the 2nd and 3rd centuries A.D., the Buddha was shown as a human being sitting in meditation (deep thought).

Indian temples, under the Hindu rulers, were decorated with pictures and sculptures of the Hindu gods. Often, the whole building was covered with carvings.

Styles of Indian art remained unchanged even after the Moslems conquered land in the 11th century. By the 19th century, India was a colony of Great Britain, and the ancient styles of art died out. 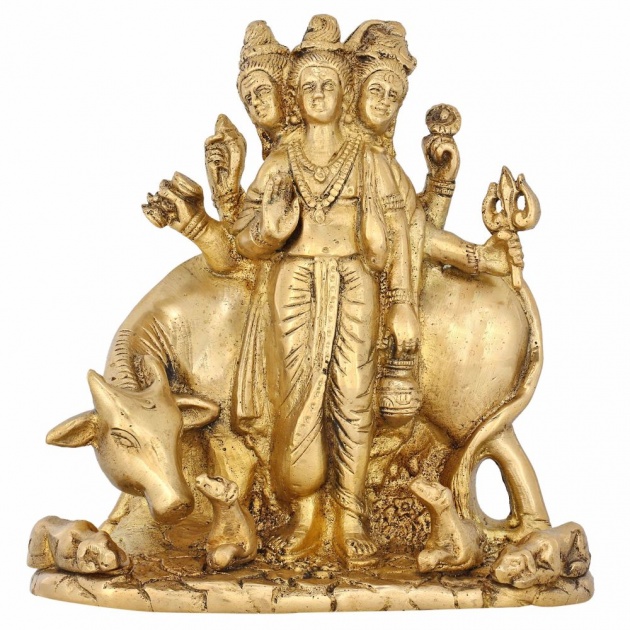 The (above) three Hindu gods, Shiva, Vishnu, and Brahma, have human forms in this early Indian sculpture. 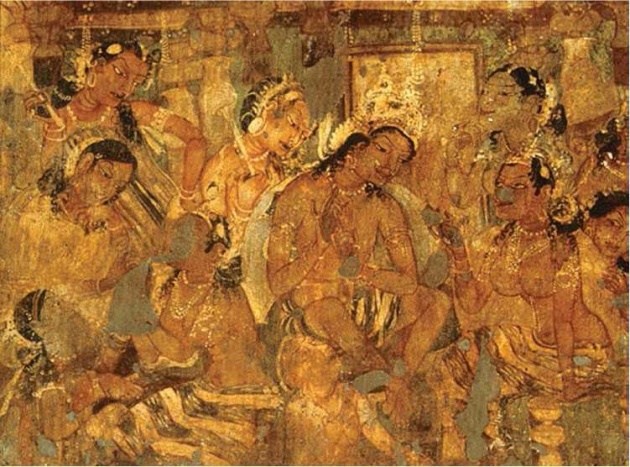 A section from a 6th-century Indian wall painting

In India painting has always taken seconds place to sculpture. There are the two types of painting: mural art (wall paintings) of the Gupta period and later kinds of miniature painting (very small paintings, usually portraits).

The wall paintings of the Gupta period (from the 5th and 7th centuries) decorated buildings and illustrated the life of Buddha and his followers. These works are noted for their grace and the beauty of line.

Miniature painting was developed by Rajputs, Hindu nobles who rules in the Himalayan foothills during the 16th and 17th centuries. Their subjects were taken from the folk tales and well-known stories of the Hindu gods, such as Krishna. These Rajput paintings have a beauty and color all their own. 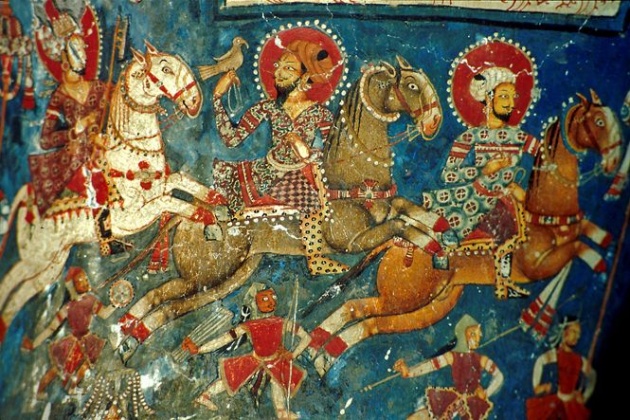 Above photo is the mural painting made in Ajanta cave during the golden times. 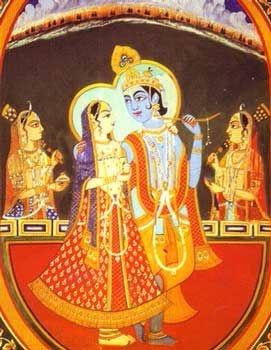 Above photo is a miniature painting by Rajputs displayed in the 18th century.

Early Indian architects, from 200 B.C to A.D 400, built monument called stupas. These were mounds that contained the holy objects belonging to the Buddha or his followers. The top of the stupa was a great round dome resting on a base. These monuments often had richly carved gateways.

The Indian temple as we known it today was first designed in the 5th and 6th centuries. The likeness in a Buddha was kept in a closed cell. Carved pillar supported a porch. Sometimes, the temple had a tower, known as the sikhara which was shaped like a beehive. During the period of Hindu rule, the simple plan of the Gupta shrines (holy places) was changed and added to.

Buildings of the Mogul period, from the 1500s until the arrival of the British in the 1800s, showed the influence of the Persian architects. The Taj Mahal, a Moslem tomb, is the most famous of the Mogul buildings.

THE ART OF CHINA

The artists of China have always been interested in the mysteries of nature. In their work, the Chinese tried to express the timeless forces. Artists did not simply copy a landscape but tried to suggest what it meant to them.

Chinese art is based on customs and beliefs that have been handed down for thousand years. Styles have changed slowly because artists have always been deeply aware of the past.

In the 5th century A.D., an artist named Hich Ho made a set of rules for judging the quality of paintings. These rules were known of the Six Canons, and they ae still used today.

In general, painting has been the most important art in China. During the Han Dynasty (202 B.C.-A.D. 220), the painting was done in a style that later became the established custom. From the few scraps the remain, we can see that the few figures were drawn with quick, brush outlines, and then painted with flat, unshaded color.

The Chinese feelings for nature were shown at its best during the period of the Sung rulers, from 960 to 1279. Sung artists loved to paint landscapes. The teachings of Confucious, Lao-tse, and Buddha encouraged them to study nature closely. Chinese artists tried to show the delight and poetry of nature in the landscapes that they painted on hand scrolls (rolls of skin or paper). 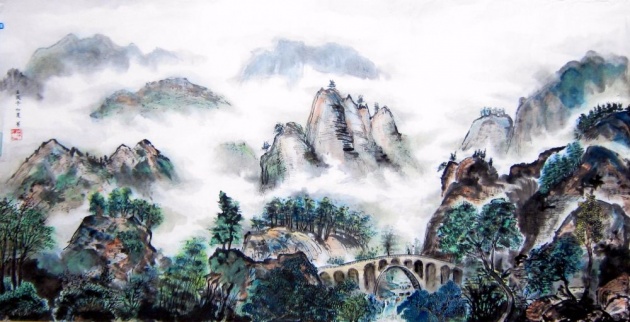 The ink and color landscape shows delicacy of Chinese painting.

HOW TO PAINT A CHINESE LANDSCAPE 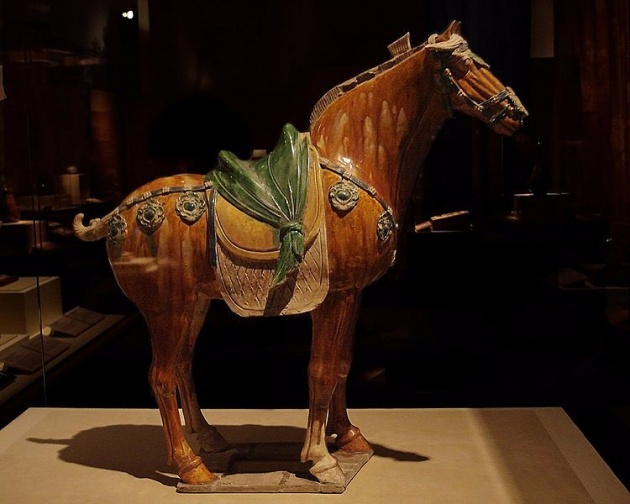 The glazed ceramic horse (above) was probably made in the 9th century.

CARVINGS WITH A MEANING

Before 2000 B.C., no foreign influences affected the works of Chinese artists. They knew nothings bout art outside their own country. Some aspects of the sculpture practiced during the period of the ancient Shang rulers (1523-1028 B.C), were regularly copied by later sculptors. Small marbles animal carvings have been found with spirals, hooks, and shells carved on their surfaces. Each mark was a symbol of one force of nature that affects man.

Chinese sculptures continued to prefer symbols to real life subjects. Jade (a hard green stone) was carved into shapes that were used as ornaments and offerings for the dead. One piece of the Han rulers shows carved dragons shooting up like flames round stone.

During the period of the T'ang rulers (A.D 618-906), the sculpture was influenced by the Indian Buddhist statues of the Gupta period. The Chinese used the rounded forms of Indian sculpture but they also showed the importance of using straight lines.

There is almost nothing left of the Chinese architecture of the earlier periods. Most of the buildings that have survived from early times are pagodas. Pagodas are square, tower-like buildings, that were used as holy shelters for Buddhist religious objects. Their shape and use came originally from the Indian stupa. 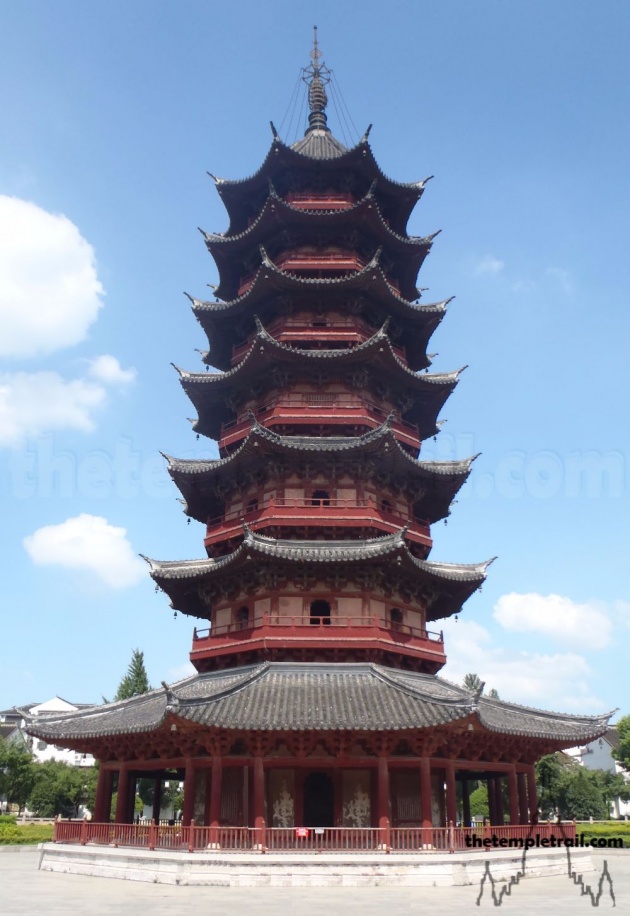 Pagoda (above) is a place of worship of the Buddhist developed in East Asia.

THE ART OF JAPAN

The Japanse have always had a strong sense of pattern and the interest in natural forms. The Japanese artists is just an interested in in the beauty of bamboo as in shining gold and silver.

In Japanese art, there is a balance between the idea of an object as a pattern and as a lifelike picture of the object itself. Portraits and paintings of flowers and plants show the subjects as they are. But this realism is balanced by simple patterns and a design that shows qualities apart from the subject itself.

Japanese artists were greatly influenced by the Chinese. The Japanese learned the art of painting in the 17th and 18th centuries. When Buddhists went to Japan from China, they brought with them the Chinese paintings and carvings. A national style did not develop in Japan until the Fujiwara period (857-1186). At that time, Japan had no contact with China. In the scroll paintings of that period, figures were painted, as flat decorative patterns with little shading. These pictures, with their delicate colors and flower-like designs, show the romantic spirit of the court.`

The Fujiwara period was followed by the military age known as the Kamakura period (1185-1333). During this time art became more lifelike and pictured the cruelty of reign.

A skill closely related to painting was the art of painting from woodcuts (blocks of woods with a design cut into them). Prints were made as early as the 17th century. The best prints appeared in the 18th centuries. The Japanese called this art form ukiyoe ('picture of the world of pleasures'). The daily activities of fashionable people were the subject matter of these prints. prints were also made of popular actors and landscapes. Their bold patterns and simple designs had a great influence on Western artists. Some of the Japanese printmakers of today still work at this fine art. 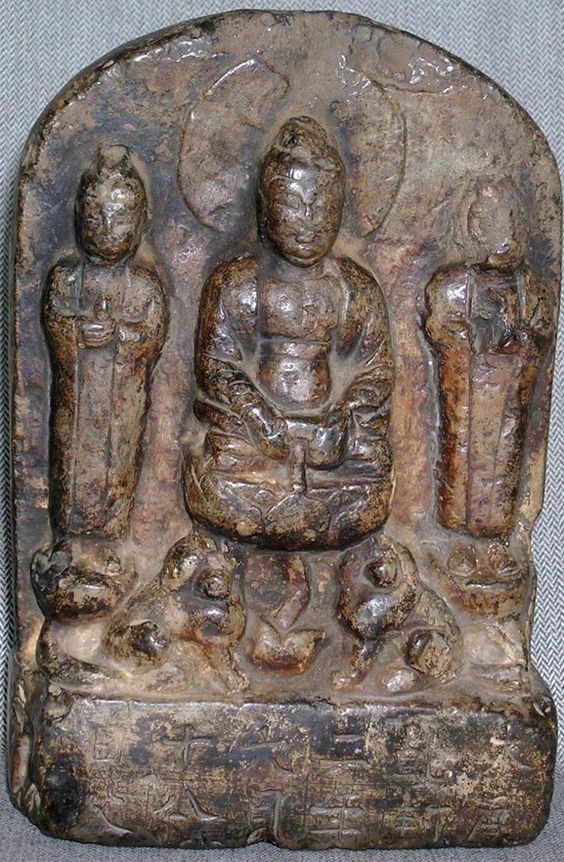 The figure in a temple grotto: during the T'ang dynasty, Chinese sculpture was influenced by Indian art.

Most Japanese believed in Shinto religion before the coming of Buddhism in 552. During that time, very simple, small clay figures called haniwa were placed on graves. Those figures that were decorated had sweet, doll-like faces.

When Buddhism came to Japan, a sculpture was influenced by Chinese art. In the Kamakura period, Buddhist sculpture developed strength and a life-like quality. This is shown in a 26-foot (8-meter) wooden statue of Nio, protector of the Buddhist faith, that has survived from the period. 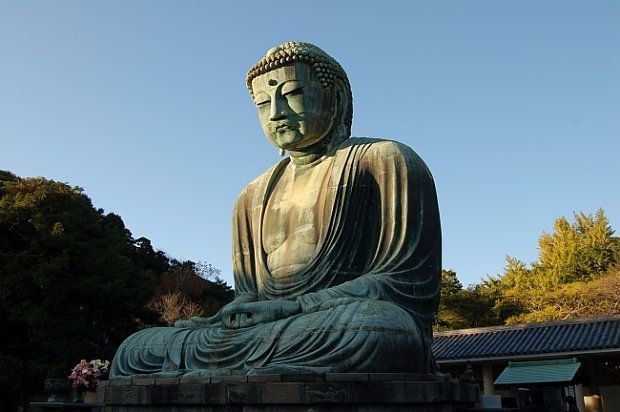 A bronze Buddhist statue of the Kamakura period, Japan

BUILDING WITH NATURE IN MIND

Japanese architecture takes into account the beauty of natural settings. Wooden houses blend with the surrounding scenery. There seems to be hardly a breakdown between outdoors and indoors when the sliding doors are opened.

Japanese architecture is noted for its simple designs and its use of natural forms and materials. In order to lessen the damage caused by the earthquakes, wood was widely used as a building material, instead of stone. But today concrete and steel buildings are designed to give as much protection as possible from earthquakes. In this and other ways, Japan has played her part in the growth of modern architecture. 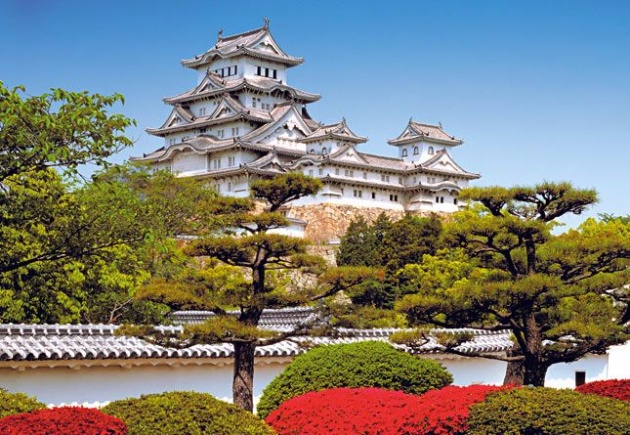 WAYS TO TRAVEL IN HIMEJI

The following lists credits, by the article, the sources of illustrations, used by the author of The Arts of the East. Credits are listed below separated by a comma.