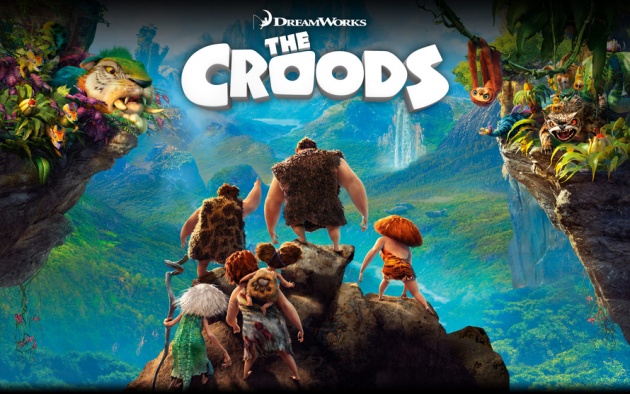 Moviegoers fell in love with the prehistoric animated comedy, "The Croods." Sure, the film has that old yabba dabba do feeling, but it's still sweet and funny enough for viewers to take it to the No. 1 spot at the box-office. Featuring the voice work of Nicolas Cage, Emma Stone, and Catherine Kenner, the 3-D DreamWorks Animation landed on top with $44.7 million.

At No. 2 was the nerve-wracking "Olympus Has Fallen" from "Training Day" director Antoine Fuqua. Gerard Butler stars as disgraced Presidential guard, Mike Banning, who must return to the White House to save our President (Aaron Eckhart). The FilmDistrict movie opened strongly with $30.5 million.

"Olympus Has Fallen" exceeded expectations with FilmDistrict predicting the film would open in the under-$20 million range. As it turned out, the action-extravaganza became the studio's biggest opener yet beating the "Red Dawn" remake's debut of $14.3 million last year's Thanksgiving weekend.

And with the film receiving an A-minus CinemaScore, that means people are enjoying the flick and will be coming back to see it.

By the way, another odd for "Olympus" was that the film was Rated-R which many before it fell flat at the box-office like "The Last Stand" and "Parker." But not "Olympus," so yay!

Other new films that opened did not enjoy as much box-office success as "The Croods" and "Olympus Has Fallen." Focus Features' "Admission" starring Tina Fey, Paul Rudd, and Lily Tomlin debuted soft at No. 5 with just $6.4 million. But its budget was only set at $15 million so Focus will get their money back soon.

Meanwhile, "Spring Breakers" from A24 Films starring Selena Gomez and Vanessa Hudgens with the memorable James Franco (yup, he's waaaay better here than the wizard in "Oz The Great and Powerful") opened at No. 6 with $5 million.