The Death of Saturday Morning Cartoons: You Asked For It!

All over the Internet, it seems, article after article is "sounding the death knoll" of the broadcast TV Saturday Morning Kidvid lineup in America.  The CW Network's "Vortexx" lineup of mostly action cartoons like "Dragon Ball Z Kai" and "Sonic X" made its last appearance last Saturday (which also happens to be my birthday).

The one article about this event that's quoted the most is from Gizmodo, "This Is the First Weekend in America with No Saturday Morning Cartoons" (gizmodo.com/this-is-the-first-weekend-in-america-with-no-saturday-m-1642441646), and it explains how the Federal Communications Commission started to more strictly enforce the rule that broadcast networks (NBC, CBS, ABC, Fox, CW) must present at least three hours of "educational" programming every week.  The easiest place to do that was Saturday morning, especially since, with cable TV and mobile streaming, there were entire channels dedicated to cartoons and kidvid that kids can watch every day.  Therefore, there was no need for networks to show a special weekend block of programming for the kids.  So now Saturday Morning is full of live-action "educational" shows for the whole family (really, for the older kids).

At this point, most of these articles have the writers wax nostalgically about when they and their siblings would pour themselves bowls of sugar-sweetened cereal and milk, park themselves in front of the (analog) TV and watch cool cartoons with funny animals, mystery-solving teen rock bands with funny pets, superheroes, cartoon versions of celebrities and their strange adventures...and the occasional "educational" segment, just to please the parents.

Don't worry, I'm not going to bore you with my memories of Saturday Morning kidvid I watched growing up in East Chicago--well, maybe some other time.  I'm just going to say this:  KIDVID CRITICS, YOU FINALLY GOT WHAT YOU WANTED!  All you "concerned adults" who called kidvid "rubbish", among other things, wished for more shows that "taught those kids a lesson" and were not cartoons because cartoons were too "unreal".  I hope you're happy!

And all of you "Saturday Morning Veterans" boo-hooing about how your kids will never enjoy the simple pleasures of watching a big morning block of fun programming just for them, KNOCK IT OFF!  Your kids are not you!  They're happy with whole channels just for them, thank you, and they're happy with seeing kidvid whenever they want (OK, whenever you let them watch).  This is their generation, not yours.  Besides, when they grow up and have kids, they, too, will be wondering what happened to all those cool cartoon shows like "SpongeBob SquarePants" and "Gravity Falls".  It's a cycle.

I leave you now with some of the major cartoon stars from Filmation, the Saturday Morning Kidvid producers second only to Hanna-Barbera. 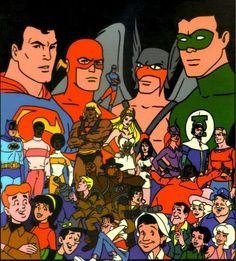 Benefits Of Early Rising in the Morning

Early to bed and early to rise, makes a man healthy, wealthy and wise. All of us are familiar with …