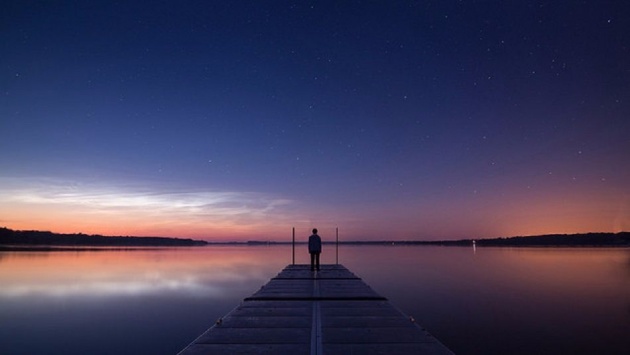 submitted by jwithrow.
Click here to get the Journal of a Wayward Philosopher by Email

Journal of a Wayward Philosopher
The Gamma Phenomenon

"Humanity in our time remains in infancy. We are essentially unlimited creatures, yet we have been wallowing in abject poverty - physically, mentally, and spiritually. We have natures that are suited to high adventure, yet we remain stagnant. Why? Because we've been conditioned only to exist, not to live." - Prester John, A Lodging of Wayfaring Men

Little Madison is approaching her second birthday, and somehow she has already picked out her own birthday gift. "I want to ride Leo the horse...", she says with a hopeful sparkle in her inquisitive blue eyes.

Naturally, her father considers all of the things that could possibly go wrong in such a scenario. Do you want to mommy or daddy to ride with you?

No! I want to ride all by myself.

As best I can tell, to observe a toddler is to observe human nature in its purest form... before all of the social conditioning, group-think, and peer pressure begin to alter behavior.

Assuming this is correct, the need for high adventure, exploration, and excitement seems to be embedded into the core of human nature. Madison possesses a zeal for life, and she does not tolerate any restrictions on her freedom to play and explore. Any curtailment, indeed even the threat of curtailment, is met with fierce resistance and extreme displeasure.

While it can be inconvenient at times, wife Rachel and I respect this, and we intervene only when necessary for health or safety reasons. We strive to be honest and consistent in our parenting, and we hope this approach will set a good example for Madison. After all, it strikes us as hypocritical to tell Madison it is wrong to use force or coercion against others, only to turn around and use force and coercion against her as a convenient means of behavior modification.

But then I look out at the world beyond my front door, and I can't help but notice that the bulk of industrial civilization is built around the use of force and coercion as a means of behavior modification...

This seems to be a common topic that finds its way into much of my unscripted writing, and for quite some time I didn't really know why.

Why do I take issue with the coercive model of top-down social organization when most people - including the people most harmed by the political policies forced upon them - do not? Sure, most people favor a particular political party and they despise the other, but very few question the model in its entirety.

So why do I... is it a character flaw? After all, this state-centric model does work to achieve a certain degree of order and stability albeit with certain injustices built in. Sure, it could be a lot better... but it could also be much worse. Why does it bother me so?

I found my answer within one of Doug Casey's periodic essays that come to me via email from Casey Research. In this particular essay, Casey detailed a sociological experiment conducted on lab rats by scientists in a controlled environment.

What the experiment demonstrated matched up rather well with what the scientists expected: the rats created a top-down social structure with a few 'Alpha' rats asserting dominance over a large number of 'Beta' rats. The Alphas established territories, claimed choice mates, and basically lorded their dominance over the Betas. Amongst the Betas, a few seemed to help enforce the Alphas' territorial claims while the vast majority were content to simply follow the rules and do the best they could under the circumstances.

The scientists were surprised to find a few rats that exhibited a third personality type, however. These rats seemed to exhibit some Alpha traits in that they staked out territories and assertively chose mates, but what puzzled the scientists was the fact that these rats appeared completely uninterested in competing with the Alphas or dominating the Betas. These rats were not submissive, but neither were they authoritarian. This was a break from what the scientists expected, and they called this the 'Gamma' personality type.

While nobody will compare humans to lab rats, it is pretty obvious that the personality types from this experiment translate over into a human equivalent. In fact, I would wager that you immediately thought of people you know who match up with these different personality types quite well.

It is clear that some people aggressively strive to reach the top of the social ladder, and they don't mind flashing their status or asserting their dominance once they do. It is equally clear that other people are rule-followers who do not think themselves qualified for top positions, but they do legitimize the rules set by people in high places. And of course some people just aren't much interested in playing, and no amount of scolding or ridicule can change their mind.

With lab rats these characteristics appear to be purely genetic in nature, but I suspect environment and experiences - especially during childhood - play a significant role in the development of human personality traits. These personality types aren't absolute in humans, but instead we possess certain traits and tendencies which blend these personality types together.

Whatever the reasons, I suppose I possess a heavy dose of Gamma traits, which is why I cannot approve of force and coercion as a means of social organization.

Once this came to my attention, I began to notice that the Gamma personality is not as rare as I originally thought... it's just that many Gammas have never been exposed to philosophy that gives life to their core personality. Instead, their social conditioning has presented to them an Alpha-Beta world in which they could never really fit in.

As such, I suspect most Gammas feel like loners in this world to a large degree. Their personality traits tend to make them fiercely independent, somewhat introverted, slow to talk about themselves, uncomfortable in large groups, and notoriously bad at social organization; so they are slow to meet and network with people of like mind.

The fact that the Gamma personality is an affront to both Alphas and Betas doesn't help, either. To the Alphas, the Gamma is a weak underachiever because he refuses to aggressively seek positions of power and status. To the Betas, the Gamma is a deviant with no respect for rules or customs because he seeks to distance himself from the established order.

For the Gamma, the Information Age is a light in the darkness. For the first time in history, the Gamma can build and join alternative systems and participatory networks capable of existing in parallel with the Alpha-Beta status quo. This sounds quite strange to people not familiar with the topic, but there now exist Gamma systems capable of providing core services and functions previously monopolized by monolithic state-corporate institutions. Here are a few examples:

Bitcoin (and a whole host of smaller cryptocurrencies) completely separates money from the state and the central banking cartel, and it makes every man the CEO of his own bank. Further, Bitcoin dis-intermediates the middle men and enables people to send money to anyone, anywhere, at any time almost instantly, almost for free, with no restrictions whatsoever.

Open Bazaar is a distributed, decentralized digital marketplace that directly connects buyers and sellers on a global scale. Open Bazaar is similar to digital marketplaces like eBay, except it cuts eBay out of the picture entirely because it is a network, not a company. Instead of central servers, middle man fees, and third party oversight, Open Bazaar's network enables each individual user to act as his or her own server. In addition to cutting out fees, this model also eliminates censorship and restrictions on trade.

Demon Saw is a secure and anonymous information sharing platform that enables users to chat, message, and share files with one another in a completely private manner. Popular social media platforms and standard file storage platforms capture and store all of your data and communications, thus violating your privacy and exposing you to security risks. For example: as this journal entry is being published, a hacker is selling data from 68 million Dropbox accounts on the dark web. Demon Saw solves these problems and enables people of like-mind to network, organize, and share data in a way that is both private and secure.

Maid Safe is building a network capable of decentralizing the Internet. This project is very much in its infancy, but it pools the computing resources of users to create a global network that cuts out the third parties and centralized servers which currently store, monitor, and monetize virtually all data.

If this sounds too crazy to be true, established geographic nations such as Estonia and Liberland already offer e-citizenship to people from anywhere in the world. Of course there is an application process, and e-citizenship does not include physical residency, but it does provide useful services - especially for entrepreneurs.

This competition between nations for citizens was predicted back in the 90's in one of my favorite books titled The Sovereign Individual by James Dale Davidson and the late William Rees Mogg. The authors speculated that the rise of the digital economy would make it difficult to maintain territorial monopolies by force and coercion alone, thus creating an environment in which governments had to actually provide useful services in an efficient manner in order to keep their most productive citizens.

I have already written about how land-titling and real estate transfer functions, as well as trading and securities settlement in the capital markets can - and eventually will - be moved to the Blockchain public ledger so I won't spend any additional time on those topics.

Also, this is just an abbreviated list. No single person can realistically keep up with all of the decentralized networks, platforms, and applications currently under development.

The beauty in all of this is that these networks, platforms, and applications are 100% voluntary - they are Gamma systems. No one is forced to join any of them, but all are welcomed. If you like your current system, you can keep your current system. If you would like to be a part of this brave new voluntary world that is forming, you are free to choose your own level of involvement.

The future is yours to create...

For out-of-the box coverage of market updates, major events in the financial markets, the evolution of monetary policy, and how to position your finances to benefit from developing macroeconomic trends, please join the Zenconomics Report!

We also track a small portfolio of stocks according to the Beta Investment Strategy, and the monthly newsletter explains how we think anyone can build a small fortune over the next several years by catching a major financial trend that is just now beginning to play out.

As a bonus, we include a report detailing everything you need to know about managing an investment portfolio in our Assess, Mitigate, Implement, and Prosper, and we also include a 28-page guide to the Information Age with all new subscriptions.

How To Raise Children

Whole market is under negative waves,@bitcoinis on its technical move and all other are suffering du…