The History Of Villa Strassburger in Deauville, France

An avenue that cuts through the center of Deauville is called Avenue Strassburger.  It winds through the town, past the town square, boutiques, hotels, restaurants and the famed casino and theatre.  Follow it further to the end and it will take you to a magical place.  A villa is surrounded by white picket fences and a guard house, and up a long driveway lined by apple trees, which takes you to the home of the Strassburgers, and sits majestically on a hilltop overlooking Deauville, France, and is called Villa Strassburger.  The land has a rich history and was owned during the later 19th Century by Gustave Flaubert, the much admired French writer.  He inherited the property from his parents whose family had operated a farm there since the 1820's.  The land had been a wedding gift from Flaubert's grandfather.

In 1907, Baron Henri De Rothschild bought the hilltop from the Flaubert Family, and built the house.  The villa has views of the Deauville Racecourse, the famed track where thoroughbreds ran for Les Grandes Prix.  In the distance and to the west, is the town and the beach set against a backdrop of the Atlantic Ocean.  Fabulous sunsets over the water end each day...this is an area known as Normandy, with neighboring villages of Honfleur and Le Harve, where the luxurious liners stop, bringing curious tourists to this beautiful part of France.  Deauville has long been known as the playground of the rich and is famous for its casino, theatre, and horse races.  The Aga Khan and Maharejsh had homes in the area, and bought horses from the Strassburgers.

Villa Strassburger is the area's crown jewel.  In 1980, the estate was given as a gift to France by my mother's cousin Peter Strassburger.  In 2011, President Sargozy used the home for the G8 Summit, and escorted the world leaders and their wives for a tour around the property.  The home and its lovely gardens are open to the public for tours in July and August.  It is as if time stood still in this house, complete with 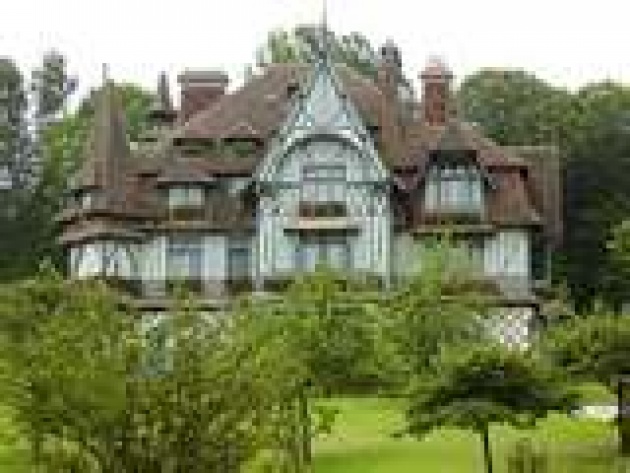 furnishings, spectacular artwork, and prized possessions.  One possession is the game ball from the 1905 Army vs. Navy Football Game (which Navy won 11-0). Ralph scored all the points and his teammates all signed the ball for him.  Strassburger graduated from the Naval Academy in 1905, and was assigned as an ensign to President Theodore Roosevelt's Yacht, "The Mayflower".  He and his family would become great friends of the President. Ralph's  father-in-law Commodore Frederick Gilbert Bourne would oversee construction of the basin of the Panama Canal, through one of his companies, Atlas Portlandt Cement, for TR.  The Canal took five million barrels of cement to create the basin.

Ralph and May Bourne Strassburger honeymooned in Deauville and throughout the Norman Coast in the Summer of 1911, following their wedding in Kent County, England in May of that year.  One of their wedding gifts was a 1912 Renault that came with a driver named William Obedine.  Obedine mapped out a trip that took them from Paris up to Chantilly, Lisieux, to the Normandy coast visiting Le Harve, Honfleur, and Deauville.  When they found Deauville, they fell in love with the place.  The couple bought this exquisite example of Norman / Dutch Architecture in 1924 from Baron Henri, after returning many summers over the years to Deauville.  They loved the the lakes and lovely gardens that could be found there, and the Atlantic Ocean and beach with endless boardwalks, the lively hotels and casino, and the horses, esspecially Aunt May (she was an equestrian since her childhood, often riding in NYC's Central Park and at her father's estate Indian Neck Hall in Oakdale, Long Island. They also purchased farmland in Lisieux in Chantilly about 20 kilos away from Deauville.  They called that property "Haras Des Monceaux", this was their horsefarm, and there was a neighboring track there as well.  It is still in operation and run by a Saudi Prince, and considered one of the finest horsefarms in France.

The Strassburgers also maintained a home in Paris at 3 Rue De Trouville, where they were members of high society in the roarong 20's.  In Paris, Ralph was a member if The Travellers Club, at 25 Avenue Champs D'Elysees. It was a famous 19th / 20th Century gentleman's club that offered fine dining, card games, and great conversation of the politics and current events of the day with the Parisian elte.  Ralph and May Strassburger, and later Peter Strassburger, their son, bred the finest thoroughbreds there, and had many winners on the European racing circuit.  In the States, Ralph owned newspapers and a radio station and another farm named "Normandy Farm" for the families' love of area.  Normandy Farm was 1500 acres at it's peak, and had 350 gead of Ayshire Cattle as well as horses.  The Kellys were neighbors and as a young child, Grace Kelly and her father Jack often joined the Strassburgers to ride on the property.  When Grace married Prince Ranier of Monaco, Ralph and May were guests at the wedding.  .

In the early years, Ralph was a bit of a 'Bon-Vivant'.  He loved his wife and women in general, the casino, and the horses, and May was a fabulous hostess.  They were very fortunate and loved life and lived it to the fullest.  They were known to have thrown wonderful parties, and invitations were prized. The Strassburger parties flowed with the finest champagne and foods, with beautiful orchestrated music creating an enchanting mood.  This was life in the 'roaring twenties'.  The mood would change as WWII approached...

The Germans invaded and seized the Strassburger properties.  Villa Strassburger became the headquarters for a German Commandant.  Remnants of the era remain.  The Commandant was a large man and couldn't fit in  the elegant claw tub in the Master suite, so he ripped it out and rebuilt an oversized tub.  Secret underground bunkers hid radio operations for the resistence, prior to the Germans occupation.  And, Haras Des Monceaux was the site of a huge battle that left the land destroyed.

Thankfully, Ralph foresaw this potential destruction and moved all of his livestock to a farm owned by a German Baroness that was not a target. They were good friends, and he knew that the Nazi's would spare her property.  The horses continued to race under her name during the war years.  Ralph, May and Peter left France before the occupation, and Ralph returned in 1946 to rebuild Haras Des Monceaux and reclaim Villa Strassburger.  It took two years of meticulous restoration to the buildings and the land at horsefarm, before he could return the horses to their pastures and reopen for business.  The property was filled with land mines, shrapnel, blown-up tanks and jeeps.  The restoration project became a labor of love for Ralph and he returned the farm to all of its former glory and never returned to the United States.

Ralph died in his apartment in Paris on February 27th, 1959, and the French newspapers wrote "a great friend to France has passed away." May and Peter continued to go back and forth between France and the US until she passed away in January of 1975.  Peter died in April of 1993.  The Strassburgers had several homes around the world, but clearly Villa Strassburger was dear to their hearts. Ralph Beaver Strassburger is buried there.   Annie-Claude Gruchet has been the caretaker of the house for the last thirty years and conducts the tours.  You can find more information on visiting through www.deauville.fr/villastrassburger  Well worth the trip to see it!

smlwindia - Food that you want to see for your Wedding

Food is on top of the wedding planning list especially in north of India.Weddings in Delhiare known …